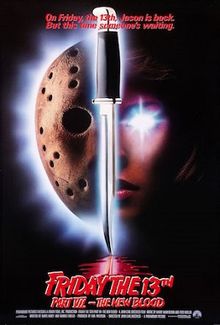 What’s It About: Finally after 6 years of doing Schlocktoberfests there’s a bona fide Friday the 13th in October! To celebrate we got insanely drunk on Peach Schnapps and watched the 7th installment of The Land Before Time series (The Stone of Cold Fire) of films and then we sobered up, got drunk again and watched the 7th installment of the now classic Friday the 13th series. This is the one were Jason battles the telekinetic chick. 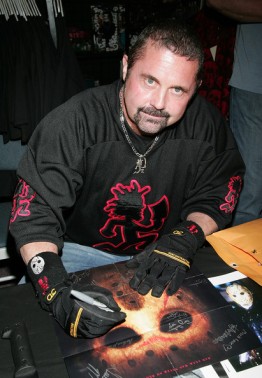 Scare Level: Jim: C’mon, who gets scared during a Friday The 13th movie at this point?

Brad: I have never in my short pathetic life been scared of a Friday the 13th movie. In fact I always root for Jason. If anything the teenaged victims scare me more.

Brian: I don’t even remember a moment that was supposed to be scary. It’s just some dimwit killing people.

Gore Level: Jim: Pretty low this time out. If you have the Blu-Ray box set, the bonus disc has all of the cuts that were made to avoid an X rating – this movie would have benefited from it since the edited kills were pretty graphic.

Brad: That’s a damn shame. This is probably the weakest of all the F13s in terms of the ‘ol blood-n-guts. If you’re going to “clean” up the karo syrup then you don’t understand the point of the type of film you’re making. Idiots.

Brian: Yeah it’s actually very weird how minimal the gore is in this. It was kind of like watching the theatrical cut of My Bloody Valentine.

Nudity Level: Jim: I think it was just one pair of tits and an ass shot wasn’t it? That’s a shameful amount for a Friday The 13th.

Brad: I think you’re right. Again, this is was a very neutered installment of the series. The first real dud. Hell, people rag of the Fifth one because it didn’t have “Jason” in it, but that one was the goriest and had the most nudity. It, at least, knew what it was supposed to be.

Brian: The two boobs in it are nice, at least. I’m sure a director’s cut would have a full-frontal scene of that guy fucking his soap on a rope.

Best Line: Jim: “You know what I like about you?” “What?” “You hardly sweat at all.” Not only is this a terrible line, we weren’t even treated to the song by The Romantics.

Brad: I always kinda liked the gag about the Personal Penis Enlarger and it’s just a magnifying glass.

Brad: I can’t think of anything that even comes remotely close to the sleeping bag scene.

Brian: When Tina is talking to Bernie about her father and he gets so bored he stuffs her in a sleeping bag and smashes her into a tree.

Worst Scene: Jim: I’d have to go with any scene involving Tina’s mom. A prime example of how voice actors should stay voice actors.

Brad: Oh so many to choose from! But gun to my head…I’ll just take the bullet. OK, seriously, the scene when the stoned girl was looking for someone in that one empty room and finds the cat. That scene dragged on way too long for no good reason and when jason finally dispatched her, he simply throws her out the window. It’s probable that she would survive such a fall. It’s not the much better done thrown out the window kill in Part IV where the girl landed on top of a car which likely killed her more than the fall. Gawd, the movie is so lame.

Brian: I 100% agree with Brad about the cat jump scene, but to throw in something different I’ll say the part where Jason cuts the power to the house. Why the fuck would he do that? He’s supposed to be an nonstop murder force, he doesn’t need the cover of darkness. Plus, he’s a fucking zombie.

Overall: Jim: You can really tell how rushed through production this was, and the result is one of the weaker entries to the series. I wanted them to continue the Tommy Jarvis angle since the Halloween movies were pretty much shit until Jamie Lee Curtis came back for H2O.

Brad: What more could be said and time wasted saying it about this terrible, weak, neutered installment of a (until that time) successful series? Every chapter of the Friday the 13th series was good or great and even Part VI greatly reinvigorated the series. So what happened here and from this point on? It even had a very original and unique premise with a final girl with a supernatural power to battle Jason with and they still managed to shit the proverbial bed with it. I’m still baffled at how bad this gets with each repeated viewing. Back in 1988, when I was 10 this was passable but now it’s a cromdamned chore to watch. Not even Bernie Lomax could make this entertaining. If the kills weren’t cut and there was more T&A then I could see past the horrible finale. Heaven knows that we’re not watching this for the acting skills or set design. They failed in almost every way. The only thing they did get right was casting Kane Hodder as Jason and keeping him for the next few flicks.

Brian: It’s a good premise, but a good premise and a $325 budget get you Friday the 13th Part 7. Aside from the telekinetic angle and the sleeping bag kill, it was just a boring slasher without much of the slasher part. However, compared to most of the other pigshit we watch here it’s not totally awful, just totally mediocre. But don’t worry, the next installment of the franchise rights the ship!

Brian’s Score: 4.75 Wonderful Vacation Days at the Lake Where Several Murders Took Place (out of 10)