What’s It About: A quaint little town where interlopers are met with extreme prejudice and intense photo shoots.

• Let’s start off with some trivia: James Farentino starred in the TV series Blue Thunder which was based on the movie of the same name written by Dan O’Bannon, who wanted his writing credit removed from this movie. So there.
• Does anybody truly miss the VW van?
• Whenever I see a photographer in a movie snapping away, I invariably begin singing “Freeze Frame.”
• Chicks who get topless on a beach right out of the blue, are really cool.
• Why does Lisa offer sex to this guy? He’s dressed like the fucking Gorton’s Fisherman.
• Lisa was also in Prince of Darkness. Another tidbit free of charge.
• Twenty people materialize out of nowhere and beat the ever-loving snot out of this photographer. Here’s hoping the vultures at TMZ get assigned to Potter’s Bluff.
• Said crowd then ties the photographer up with a fishing net, and sets him on fire. Why they weren’t chanting, “The night is dark and full of terrors” is beyond me.
• The town’s coroner is Jack Albertson – better known as Grandpa Joe from Willy Wonka. These jokes should be pretty easy.
• This diner looks like it should be located in Innsmouth.
• Shit, Midge the waitress is one who lit the match to BBQ the photographer from the beach. I’d leave her a pretty big tip right? Wacka-wacka.
• You really don’t see completely shit-faced fisherman sing shanties anymore.
• Dobbs’ explanation of his embalming procedures really needs an Oompa Loompa song.
• Dobbs always wears a carnation. That’s a death omen indn’t it?
• Val Kilmer’s drawl in Tombstone was far superior to this innkeeper’s.
• Melody Anderson from Flash Gordon is the sheriff’s wife. Right on! She’s a classic 80’s hottie. Remember her in Policewoman Centerfold? I sure as shit do.

• A lot of this movie’s looping is very poorly done.
• Ooofah! Lisa from the beach sticks a huge hypodermic needle right into the photographer’s eye. Christ on a pony, you usually only see that kind of trauma in Italian horror movies.
• A lost family rolls into town and the father says that he’ll go into the diner and ask for directions. Think they’re fucked?
• Freddy the photographer whom we last saw charbroiled and occularily needle-raped, now looks as good as new and is apparently the town’s new gas station attendant.
• The idiot family seems to escape the town regardless of the fact that their kid was probably better off with whatever the hell these townies are.
• The sheriff hits one of the townsfolk with his car and the victim’s dismembered arm gets stuck in the grill trying to grab at him. I’ll take: These People Are Obviously Zombies for $60, Alex.
• Sheriff goes home and finds a book on witchcraft and voodooism in his house. I sense denouement is almost upon us.
• The old man who develops the home movie for the sheriff is the same old man from the “Kick The Can” segment in the Twilight Zone movie. Again, just some trivia.
• The lost family’s car is pulled out of the ocean. Guess they didn’t make it after all.
• The innkeeper now has a New England accent. 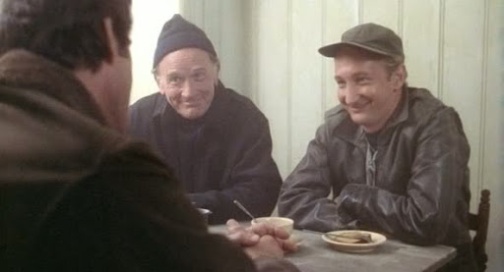 Mr. Englund there’s a Wes Craven on the line, he wants you to read for some bad dream on main street movie. Interested?

• The sheriff’s wife (Melody Anderson again for those not paying attention) is the town’s schoolteacher. I got it bad, so bad. I’m hot for… well you know the song goes.
• Nowadays, if the PTA found out that she was teaching the history of witchcraft to fourth graders, her tenure would be shredded like a paper doll.
• One of her students is the kid from the lost family. Not good.
• Why would a hitchhiker get into a car whose driver endlessly gives too much exposition?
• OK, we’re really ramping it up here. The hitchhiker gets killed and is then reanimated in full view of the audience, while the Sheriff finds out that skin samples from the person he hit are proven to be four months dead already.
• The music here is way to Jaws-esque.

Excuse me nurse, but aren’t epidurals meant for the spine?

• Fucking rotary phones. It’s hard to believe mankind was once so primitive.
• Whoa. The town Doctor just got a hose up each nostril acid injection – insert Afrin joke here –
• The Sheriff asks Dobbs if the dead can come back to life. I think we’re about to wrap things up.
• Dobbs’ assistant is painting his arm with mortician’s makeup. Clues.
• The town’s gravedigger is portrayed by Michael Pataki – known in other circles as Count Malachi from Happy Days. I knew this town had a deep dark secret.
• Dobbs sleeps in the wall freezer in his funeral home. More clues.
• Holy shit. Everyone in this town is undead. Even the sheriff – and he had no clue. Turns out his wife killed him awhile back and they filmed the whole thing, he even brought the film of it in to be developed. That’s gotta sting.

Scare Level: There’s a good handful of scares, but even though this is technically recorded as a sci-fi (?) horror film, I would say it was a supernatural thriller.

Gore Level: Stan Winston arguably did some of his best work in this movie. After watching a making-of documentary of this film, I had no idea that the body of Freddy in the hospital was a dummy. It looked that real. Oh right, gore level: beatings with rocks and other instruments of destruction, eye stabbings, throat cuttings, acid injected up noses, and undead people starting to crumble.

Nudity Level: Killer-nurse Lisa on the beach gets topless for a very quick shot.

Best Line: “You can try to kill me Dan, but you can’t. You can only make me dead.” One of the greatest fuck yous ever.

Best Scene: Without a doubt, the ending – where all is explained. As much as you can guess where things are going, there is one twist that you do not see coming and it works really good. Unless of course you read my last observation, which makes this entry pretty fucking useless.

Worst Scene: Watching the scenes with the lost family that rolls into town will make you an advocate of federally mandated sterilization. These parents obviously had the same amount of survival instinct that the woman in Jaws had when she just held her child in the water and screamed.

Overall: A damn fun movie with atmosphere, scares, gore, and a truly satisfying ending. It would have gotten a better score if the post-production was up to snuff, but like the DC Universe movies are learning– you can’t have it all.