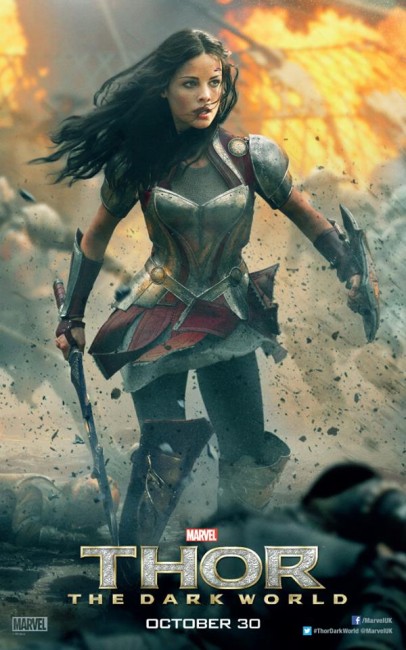 Directed by: Alan Taylor (at least one episode of every HBO drama in the past 17 years)

Synopsis: Thor must stop some Dark Elves from using their dark goop to take over the universe by blasting Dio music at them.

Worst part: Any time Darcy parts the pool noodles on her mouth and talks.

Best line: Odin: “She has no more place here than a skeleton does at a banquet!” (paraphrased)

Nudity: Thor, shirtless, if you’re into that sort of disgusting thing.

Overall: A pretty cookie-cutter super hero movie that just didn’t do anything for me. It was well-directed and had a few good action scenes, but mostly I didn’t give a dung beetle’s prized turd about anything that was going on, or anybody but Loki and Thor, I guess. Jane Foster is about as interestin as a plain turkey sandwich on stale Wonderbread, and Natalie Portman seriously looks like Valerie Bertinelli should show up during her scenes and ask you to donate food. Darcy is one of the most annoying characters in movie history. I actually dreaded every scene she was in. The film tries to lean on comedic lines, which work about 20% of the time, and Darcy is about as funny as a sea urchin massage in your rectum. Erik Selvig is reduced to some bumbling fool for no real reason, and I was very confused as to why he’s now crazy. Even the characters that aren’t annoying are uninteresting. Like Thor’s mother, who (spoiler) dies and I guess I was supposed to care, but I honestly didn’t even know her name. The Dark Elves were really just the same as the invading army in the Avengers. Everything seemed like it had all been done before, and Thor is just not interesting enough to make it seem fresh. Mysterious substance is coveted by a villain who plans to do terrible things with it? Never seen that before. Also, I still like Loki as a character, but he’s getting stale at this point, too. And (spoiler) Odin is dead, I guess? What happened there? Loki killing Odin wasn’t important enough to show? Instead we should have more Darcy and the intern scenes? Whatever, I don’t care.