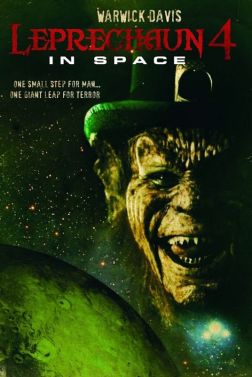 Coordinates: A group of interstellar armymen run afoul of the Leprechaun… IN SPACE. Based on true events. 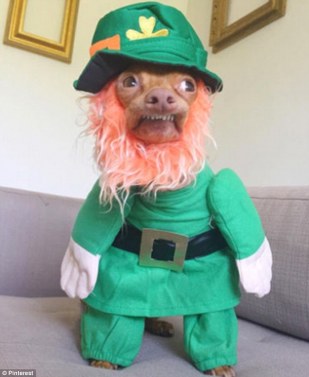 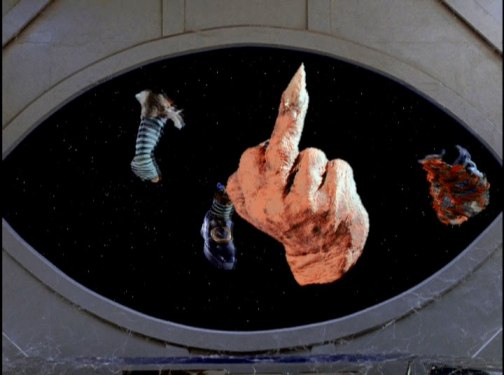 Gore Galaxy: There’s a bit. The Leprechaun gets blown up a couple of times, and an interstellar armyman gets melted by acid in a horrible scene in the “garbage room” of the sip. Then they didn’t have any more money for gore effects so every time the Leprechaun kills someone they show a static shot of space.

Nudity Nebula: The princess shows her royal boobs, which in the movie they say is a death sentence, but if so write my obituary!

Space Vacuum: They’re on one planet in the beginning that looks like melted plastic dogshit, then 97% of it takes place on a “spaceship” that looks like a giant warehouse, which is likely exactly what it was.

Best Transmission: “I’d give you a round of applause but I see you’ve already got the clap.”

Best Visual: The human spider monster at the end actually didn’t look like bad, which probably means they pulled an Ed Wood and stole it from another set. 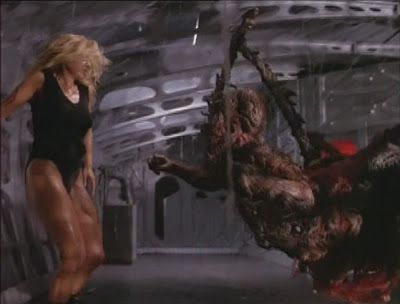 The one on the right, not the hideous creature on the left. Gross.

Worst Visual: Sometimes it seems fairly obvious that Warwick Davis agreed to only do a weekend’s worth of shooting on this picture, hence the second antagonist human computer spider monster guy. In some scenes it’s very obvious that even though he’s supposed to be killing someone he’s not even in the same room at the same time. The most glaring example of this is when the Leprechaun is in a room with an interstellar armyman and they’re having a conversation but the Leprechaun is behind some pipes and they’re never in the same shot. Then he drops a big crate on the guy for the most boring death scene since Jenny in Forrest Gump.

Universally: If I had one wish granted to me, it would be that I picked a different movie to review. The only thing that saves this Irish disgrace from the negative is Warwick Davis, who’s always fun and seems like a nice guy and does his best with the weekend he’s given. But the whole thing is just a pot o’ shit, and what else would you even expect with Leprechaun 4: In Space? You’d hope there would at least be some fun moments but there really aren’t. Fortunately, there’s really no reason you would ever watch this unless you’re a drunken masochist from the Emerald Isle or a Leprechaun movie completionist, although those are both the same thing.

Analysis: 1 Piece of Leprechaun Gold That’s Really Just One of Those Chocolate Coins but the Chocolate Is Really Cat Poop (out of 10)