Mission Log: Unlucky astronaut Steve West gets some sort of allergic reaction to Saturn’s solar flares or something and when Brough back to Earth his flesh starts to slowly ooze away. Plus he becomes a cannibalistic madman!

Left a good body in the city…

Show me melty…give me melty! 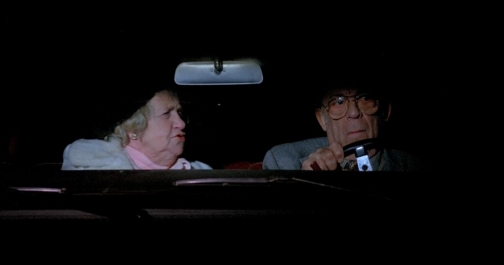 Phobia Level: Only if you have a fear of tuna melts will this flick give you the willies.

Sick Bay: While the film lacks in, well, most good things, the special effects and gore are the one thing I can give it some credit for. Rick Baker did the effects and it’s great. However it didn’t elevate the film much. Having Rick Baker do the FX in this film is like eating a big juicy steak with a side of mashed dogshit. 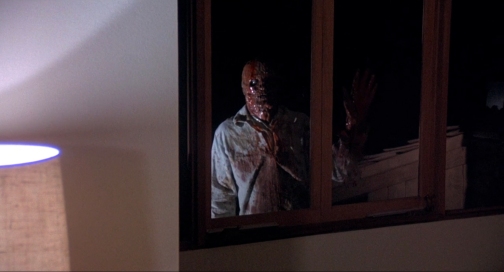 Heavenly Bodies: We did see some shots of the model, Rainbeaux (yes, that’s her name) Smith’s boobs but considering she was being sexually assaulted it did put a damper on the situation.

Best Transmission: I’m gonna go with this lunch exchange at the Nelsons:

Most Successful Experiment: I really liked the death of the Sheriff by electrocution. One of the more impressive death special effects I’ve seen in a while.

Experiment Gone Awry: Really any scene where Ted Nelson has to act. But also the scene involving the two old geezers was completely pointless.

Everyone was too embarrassed to tell Steve that he left toilet paper on his face.

Damage Report: I was expecting a lot better from this film. I’ve always heard of it (I think it was featured a little bit on It Came From Hollywood, a sci-fi/horror clip movie featuring Dan Aykroyd, Gilda Radner, and Cheech & Chong that I used to watch a lot as a wee lad) so I assumed it had its bright spots. But alas, it was a tough, boring, slow watch. Like I said, the special effects were great (for its time) but not even the genius Rick Baker could carry a movie all on his own. The story was non-existent really. Astronaut returns home and immediately has a bad case of melting flesh disease and starts a killing rampage in a small area of woods somewhere in rural California. There’s like a dozen actors in this so there’s not even that much of a killing spree to highlight the gore effects. If only it was slightly better or even slightly worse then this film would be more entertaining. Overall, I’m not sure if I would recommend this since it really isn’t worth the time spent watching it.