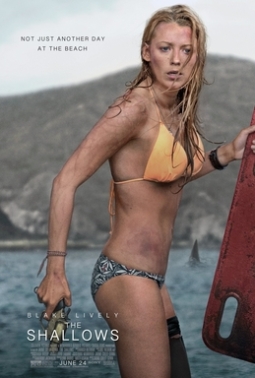 **I would advise you to not watch the trailer, because today’s trailers are utter crap and spoil the movies way too much. The Shallows would benefit if you saw less. In fact reading my review would not be such a great idea.

Synopsis: Survival-based movie about a lone surfer who is wounded, weak and terrorized by a Great White shark on a isolated beach.

What works: I don’t want to go into too much detail for potential spoilers but I’m sure 99% of you can ascertain what the ending ultimately turns out to be. But again, the parts are greater than its total and I’ll try not to give too much away.

But this is one helluva great thriller and Blake Lively is fantastic. Marco Beltrami’s score is even worth mentioning. But my favorite aspect is the incredible cinematography by Flavio Labiano. The beach is beautiful despite the terror and he frames every shot so well that I wanted to be at that beach even with the shark being there. Whether it was over head shots or underwater it was one of the most gorgeously shot movies I’ve seen in a long time. And the surfing scenes were done great as well, only second to the inimitable North Shore. 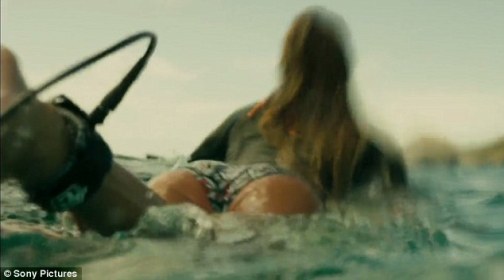 Blake Lively is now a bona-fide adult actress in my eyes. Sure, she’s one pretty lady but now I can honestly take her acting and role choices seriously. She plays Nancy like a true heroine; not some prissy victim in one of the worst crisis-situations imaginable. And she’s a virtuous and kindly soul to boot in the film. There’s one scene that has her stranded on a rock and some drunk local knows she’s out there. She’s yelling for him to get her back-pack to get her phone to call for help but the bastard robs her. And watching the drunk walk away with her stuff and then go into the water to then steal her surfboard she still warns him of the killer shark to save his life. Tough situation to be in, yet she still keeps her morals. I really enjoyed watching Nancy going through her ordeal because she was portrayed as a very smart, problem-solving, no-surrender heroine.

The effects were also top-notch. The shark was very nicely done. Much better than Jaws: The Revenge. And being a horror/thriller the tension was done without grossly overused horror cliches like booming shrieking music. I could nit-pick about the jump-scares but being that everything else falls into place nicely and that it is a giant shark (which is very fast to begin with) I can forgive that. 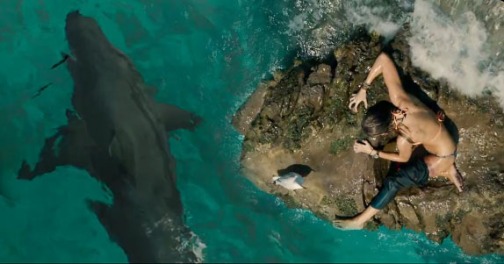 The break-out star of this movie is actually Sully the Seagulll. You read that right, a seagull. He’s got a credit in the film so I’m assuming he’s a real seagull and not CGI. But he’s Blake’s new friend who’s also stranded on the rock with her because of a busted wing. He reacts to and with her to the situations and brings some levity in-between the tense shark scenes. He was fun and I look forward to his future movie roles.

Another aspect I enjoyed was way the movie attempts to make this a philosophical metaphor. Nancy goes to this particular beach because her recently passed-away mother went there to surf when she learned she was pregnant with Nancy. Repeatedly Nancy asks locals that she meets the name of the beach and they don’t answer her and we never learn the name. Also she’s understandably mopey and thinking of a life-change (more like sea-change!) because of her mother’s death. Depending on your enjoyment of the film you will get the metaphor or philosophy and it will become a great little additive to the over-all film. It’s been a long time since I saw that kind of symbolism in a film, especially a horror film, and it will only increase my enjoyment at subsequent viewings. It’s a huge difference to a film. It’s what separates the Mad Max Fury Roads to the Batman vs. Superman‘s. Extra effort is all I ask to really enjoy a picture. 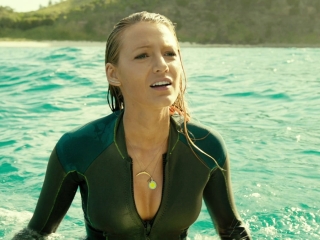 What fails: I do have some nit-picks in this awesomely fun popcorn summer so-to-be-exploitation-classic. The biggest one is that Nancy is probably too smart. I said earlier that she was a smart problem-solver and a lot of what she does is way too smart for a med-student. I can believe that she can suture up a huge gash on her thigh with her earrings because she is a med-student—that’s fine to me. But in one scene she actually diagnoses and fixes Sully the Seagull’s busted wing. I know she’s a medical student but how would she know the bone structure and anatomy of a seagull? But I could go further with her super-acute night and marine vision when she locates objects underwater at dusk and low-light. I can also nit-pick that she’s stranded on a rock for over 24 hours with no water or food with a tourniquet wrapped around her leg, yet still has enough energy and strength to swim around. And the way she out-wits the shark is also hard to swallow sometimes since she is weak and comes up with her solutions within seconds of being around new environments. If you can get past these nitpicks (like I can—this movie was too much fun not too) then you’ll have a fun time at the cinema. 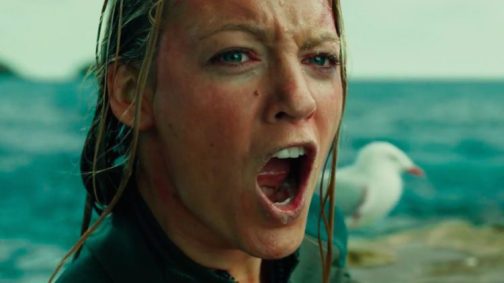 Overall: I may be a little biased since I am a huge Jaws fanatic and love sharks in general but I thoroughly enjoyed this popcorn summer picture. It was perfectly toned and paced with enough great scenes and plenty of beautiful camera work. I have not seen Jaume Collet-Serra’s other pictures because, well his first starred Paris Hilton, so I avoided that like a plague of STDs. But he has many other’s to choose from so maybe I’ll look in his direction. After all I have gave praise to Spanish and Mexican directors before and after The Shallows, he looks like no exception. 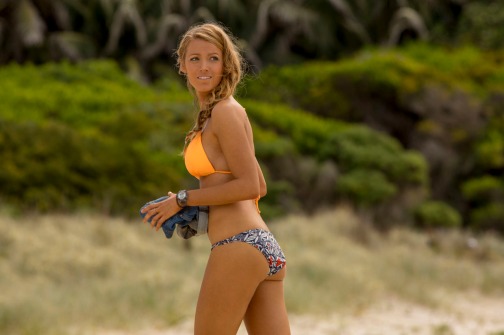 3 thoughts on “Reel Quick: The Shallows”