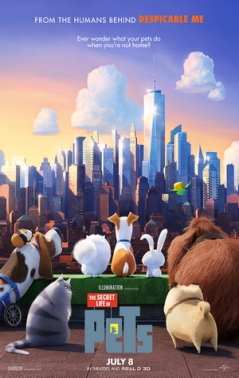 Synopsis: An odyssey story about two canines, Max (Louis C.K.) and Duke (Eric Stonestreet), who at first get off on the wrong paw, find friendship and compassion for each other along the way as they try to get back home. Meanwhile, a gang of stray pets who live underground are after them for accidentally killing a snake. Also in pursuit are Max’s love interest Gidget (Jenny Slate) and the other neighborhood pets trying to help Max and Duke get back home.

Would you be able to sit through it?: Sure! All-in-all this is a FINE film. It’s not great and it’s not awful either. I laughed only a few times but I wasn’t checking my watch either. It had some decent scenes of genuine mirth but my first impression is that they could’ve done better. 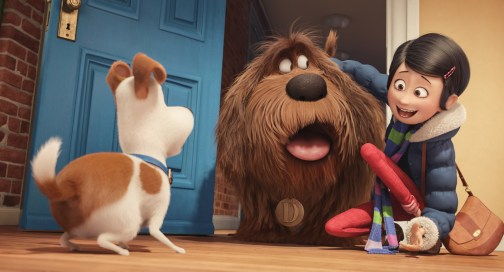 Any scary/violent parts?: Some. Like I mentioned in the synopsis, there is a death of a viper. Before the bunny leader, Snowball (Kevin Hart) bring Max and Duke to his lair in the sewer they are confronted by a gate made of snakes which my daughter’s found somewhat alarming at first. And then the Viper is killed by falling debris when Max and Duke are having second thoughts about joining their gang. And that’s not the first mention of death either. It has a fair share of morbid scenes. There’s a very hungry hawk (Albert Brooks) who tries to eat a few animals before his plans are foiled. There’s also a torture scene when Gidget repeatedly punches a slime ball cat for information of Max’s whereabouts. The Hawk also threatens that cat’s life by holding him over the side of a high-rise building. So there’s a lot of “mature-themed” humor in this kids’ flick.

Anything that will screw up your kid’s head?: I’m sure most kids will realize that their pets don’t do anything strange while they’re away. Which, is what I thought the main premise of the movie was—what pets do when the owners are out of the house. In fact, being that this is an adventure story that takes place within a span of a day, the title is a bit odd; but I digress. I don’t think the kiddies will think that pets are having a frat house-style party in their homes, raiding the fridge or seeking revenge. If I had to equate this film to another, I’d say it’s akin to the old Looney Tunes cartoons more than anything with their off-color characters, rudeness and mature themed scenes and talk. 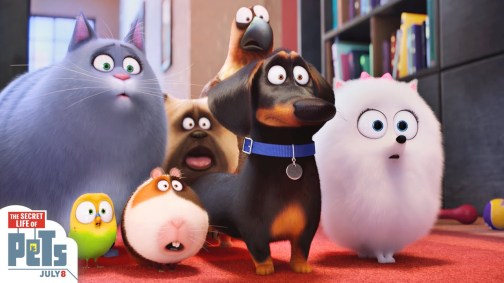 Any lessons to be learned?: Give new people/animals a chance. Learn to give new experiences a chance also. Work together to achieve your goals and/or survive. Help a friend in need.

Recommended age: 6. I went with my youngest daughter, who’s a young 4 and while she sat through the whole thing no problem I think a ton went over her head. The jokes were more for older kids and not enough Finding Dory-type of cute humor. My 7-year-old loved it when she saw it but again, I’m not sure how much she understood everything. Both happened to like the same scene when Snowball gets too excited and accidentally poops and a nearby cat plays with the little round turds. So yeah, take that for what you will. 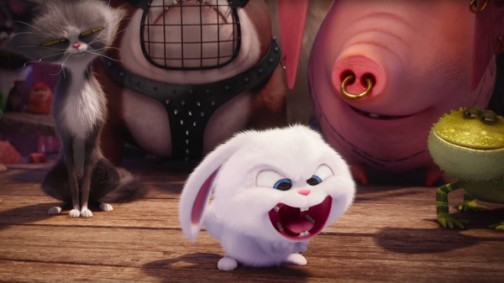 Rent it, buy it or avoid it?: Rent/Buy. Like I said, this was a fine movie and at times a lot of fun. As I’m thinking of some of the scenes, I’m smiling still but I wouldn’t rush out again to see it. It’s definitely a matinee movie if you’re more curious. I also think that this could work with more sequels as we have an established amount of decent characters now and they could be great in more adventures when the owners are away.

I don’t have a lot to nitpick other it wasn’t as funny as I was hoping. Also, and this is probably just me, but I’m kinda sick of hearing the same voices in these animated movies. I just saw movies this year with Albert Brooks and Jenny Slate and would prefer to hear different voice-talents. I’m still not sure why Louis C.K. and Eric Stonestreet were the leads though. Neither of them have interesting voices really and they don’t do an impression or anything. On the other hand, Dana Carvey did a great job as Pops a senile rugged Basset Hound.

Preceding Short: Being that this was made by Universal’s Illumination Studios, they had a fun little Minion short about them doing landscaping to raise money to buy a special banana blender. It was off-the-wall and reminiscent of the old crazy cartoons of bygone days and I was pleased enough by it.

One thought on “Parental Guidance Suggestion: The Secret Life of Pets”