Schlocktoberfest Day 22: Night Of The Lepus

What’s It About: GIANT KILLER RABBITS!!! A horror movie about rabbits the size of horses killing people!!! A movie was made, marketed and distributed about giant carnivorous rabbits. It stars Janet Leigh—from Psycho!!! And truth be told….I actually liked it!

Arizona rancher, Cole Hillman as a lepus problem. Seems when all the coyotes were killed off the ecosystem shifted balance towards the rabbits who are destroying his ranch’s crops. He calls in a favor to an old friend, Elgin Clark (DeForest Kelley) to contact local zoological researchers, Roy (Stuart Whitman) and his wife Gerry Bennett (Janet Leigh) to help solve the lepus invasion without affecting the ecosystem with poisons. Roy tests some rabbits with a special hormone to see if that would affect their breeding but their daughter, who is quite taken with the cuddly soft rodents, switches one of the test rabbits with one from the control group and as luck would have it (like a rabbit’s foot), that rabbit gets away to the wilderness again.

Welcome to the Bunny Ranch!

Soon after things get hare-ry as the giant rabbits start spreading around town and killing people with their huge buck teeth and claws?! I think most people are drawn to their absolute adorableness and are easy prey to the giant bunnies. When Elgin, Cole and Roy find their new burrow which happens to be an abandoned mine shaft they plot to destroy the cutest predators ever with explosives. The plan seems to have worked but these are not rabbits to be trifled with. Some rabbits survive and escape the mine only to wreak more havoc in a nearby town. When more bodies start to pile up the citizens and sheriff department finally think to call in the national guard.

Their next plan is to create a haphazard electrified fence surrounding the neighboring town with railroad tracks to kill the bunnies when they stampede to it. They recruit a few hundred people at a drive-in movie theatre to use as a make-shift fence with their cars to funnel the bunnies towards the electrified railroad tracks. The national guard help as well but they use a better fence—Machine guns. Next is one of the most hysterical and stunning scenes in any movie and that’s a giant killer rabbit stampede from one town to the trap. Well the plan works and the giant killer rabbit’s hop to their death to the railroad tracks and all is well again in that small Arizona town. That’s all folks!

I really cannot fathom who thought of this premise and had the free time to write a screenplay and have Hollywood executives actually have enough money lying around to want to hire filmmakers and actors to make a movie about giant killer RABBITS!!! It’s near impossible to try to be scared when the attacker is so damn cute!! They tried to make the bunnies menacing by smearing ketchup on their mouths and showing close-ups of their buck-teeth but they failed miserably.

Scariest Moment: I can’t. I just can’t. It’s easier for me to get a horse to crap on an eagle than find a scary moment in this film. 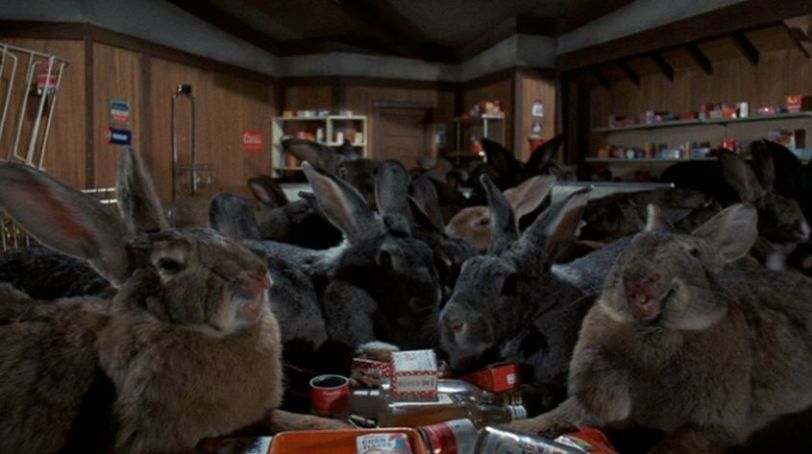 How Much Gore: Actually, a lot. These adorable rodent killers do quite a lot of damage to a human being. We see a lot of blood on the victims after the attacks. It’s quite shocking that a giant killer rabbit movie has a lot of blood in it but it does. I’ll give them that.

Dumbest Moment: See here’s the thing. Make fun of this premise all you want about a large herd of rampaging killer giant rabbits but I will say this: It is not done dumb. This is a very nicely done movie with a lot of attention to detail and believability. I never once rolled my eyes or scoffed at the screen. For 1972 the special effects weren’t terrible. The rabbits mostly hopped around miniatures of houses and other sets or they were filmed with forced perspective to show their size. I laughed quite a few times at their size but not because it looked bad or cheap but because seeing a lot of giant rabbits sitting in a mine or house is just too damn cute. My only nitpick would be that no-one seemed to give blame to why there are giant rabbits hopping around. They never investigated or had time to figure out why this phenomena happened or they just didn’t care. But that’s minor compared to the fun you’ll have watching giant bunnies devour people.

Overall: Like I mentioned earlier, this was a fun little B-movie. I’ve always heard of this film growing up and always scoffed at the premise of rabbits being menacing enough to be in a horror film. After watching it the premise does make a lot more sense to me. Sure bugs like ants & spiders or even mammals like bears are good menacing animals to use as a horror flick premise but most people are already scared or squeamish to those types of creatures. But you make a movie about something cute and cuddly and suddenly it makes the movie more interesting. I mean what would you do if you woke up one morning, opened your blinds, looked out into your backyard and saw a 25-foot squirrel gnawing at your neighbors roof. I guess anything big would make us all panic but I can see where the filmmakers are coming from. It didn’t really work because even bunnies are tough to make out as killers. The scene when they are hopping, stampeding to the next town is way more cute than terrifying when you see it on screen. If I was watching this spectacle in real life I’d surely run for the hills.

I do have one problem with this film while I was watching it and that it had zero sense of humor. Intentional humor anyway. Lines like this are comedy gold but it was not meant to be funny:

Attention! Attention! Ladies and gentlemen, attention! There is a herd of killer rabbits headed this way and we desperately need your help!

There is not one instance of anyone saying anything remotely humorous. Not even a deputy as comic relief saying something snarky or funny. Everyone takes this crisis of giant rabbits so seriously it makes the film so soulless. What I mean by that is take that quote I just wrote about the ‘needing your help’ that was spoken by a deputy at the drive-in on a megaphone. If I was watching a drive-in movie and some police officer drove up and said that to the audience I’d crack up laughing. I wouldn’t believe him for a second, I’d call him a lunatic and most likely die from a killer rabbit when it’s too late. But every single patron at the drive-in obeys the officer immediately and follows him to make that fence of cars. No one questions him at all. It would’ve been a good opportunity for some humor and even more believability on the film’s part to have naysayers and other non-believers. Even the scientists who inadvertently created the giant rabbits never questioned their mistake. They just rolled with it and tried to fix it. If I mistakenly created giant rabbits I’d be so amazed and baffled I’d be both jubilant and remorseful. There was no villain who would try to stop them by either being a pro-giant activist hippie or as someone who saw potential to use the rabbits for good as a military weapon or even to feed hundreds with just one giant bunny. It could’ve used that I think. But this film took itself just a tad too seriously for my bad tastes. I do respect the film now though, which is something I never in a million years thought it would do.

4 thoughts on “Schlocktoberfest Day 22: Night Of The Lepus”