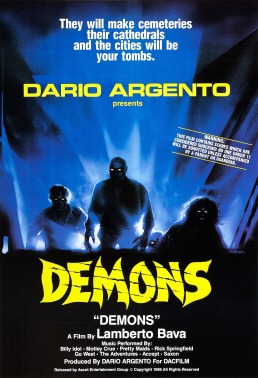 What’s It About: The Terminator gives out free movie passes and the movie makes people turn into demons, which is some kind of allegory (alleGORY!) for accepting handouts and not paying your own way.

Scare Level: The movie relies mostly jump scares and gore but also has some nice suspense. I suppose if you’re the easily-scared-by-movies type then you’ll probably be watching through your gnarled fingers a bit.

Gore Level: There is some fine ’80s gore on display here. Blood and goop spray out of every orifice. And it happens in the movie I watched, too.

Nudity Level: Just a tad bit of tit from the female punk before her boyfriend cuts her boob, for some reason.

Best Line: Cheryl: “I don’t know how to explain it, but it’s the movie that’s making this happen!”
Tony the Pimp: “She’s right. She put on that mask and scratched herself, get it? Because of that scratch, she became a demon. An instrument of evil, like they said in the damn movie, you heard it. We got to stop it I tell you, we got to stop the movie!”

You can always count on a pimp for exposition. ALWAYS!

Best Scene: The motorcycle mayhem scene defies all laws of physics and common sense, but it’s still one of the most enjoyable killing hordes of demons scenes you’re apt to see.

Worst Scene: Pretty much anything involving the group of punks. They could have been an interesting bunch of characters but their subplot just turns out to be a confusing waste of time. Let’s just forget them and instead focus on this kickass Accept song from the soundtrack:

Level of Hell: This is the first movie I’ve watched this month that didn’t make me want to grow demon teeth and then use my old teeth to scrape my eyeballs out.

Overall: A pretty enjoyable horror romp but one that doesn’t quite live up to its potential. There are a lot of fun moments, but also a lot of wasted time. The concept is great, but the overall execution is flawed and way more convoluted than it needs to be. But we are dealing with Argento(ish) here, after all. If you like horror action with humans trapped by a horde of monsters and having to do battle, you should like this, but it doesn’t really reach any sort of classic status in that department. Although it did get me thinking, now that the zombie genre has been completely and totally fucked out, we should turn back to demon movies. They share many of the same characteristics as zombies but are usually strong, can jump high, have claws, talk shit, etc. So petition your congresspimp and demand that they bring back demon action horror today!