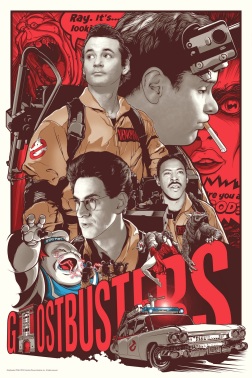 The Scene: The effect of negative reinforcement on ESP ability.

Why I Love This Scene: When I was around 7, I jumped into my dad’s easy chair and broke the footrest part of it. I was probably running from the asshole cat we used to have who was always scratching my legs. What a dickhead. Anyway, dad was pretty steamed about it, and blew his top at me. He was a pretty big dude and I was just a wee lad, so I got pretty upset at the tongue-lashing, and started bawling. I guess he started to feel bad about it, so he sat me down in the chair with him and put his arm around me, and he found Ghostbusters on HBO. It had probably just debuted on there, but my dad had already seen it multiple times, and was quoting along with the movie to help calm me down. It worked, but I don’t think that chair was ever fixed. Dad died last week at age 62 after battling ALS. We never had the closest of bonds, and he projected the image of a tough guy, but that story is evidence of how he had a soft heart deep down, and I’ll always love and miss him. I’ll let you all know if he comes back as a ghost.

24 thoughts on “Shake the Scene: Ghostbusters”