Synopsis: The 3rd sequel to the highly popular X-Men film series begins in a dystopian future where man and mutant are both hunted and placed in camps by the robotic Sentinels. The remaining X-Men led by both Professor X and Magneto are hiding in a monastery in China trying to find a solution to the unstoppable robots. Young mutant Kitty Pryde has found a way to alter her “phasing” ability to work in a way to allow other people to time travel to their younger selves. They enlist Wolverine to go back to 1973 to stop Mystique from assassinating the creator of the Sentinels thus preventing the possible future they are currently living in.

What work(s): This may sound like bullstuff but everything works. I saw the film on Friday night and during this past long Memorial Day weekend I have been building my daughters’ new swing set so I’ve had over 12 hours alone thinking about this movie and stuff to nitpick and have came up with very little. I thought that having Wolverine be the time traveler would be weak since Wolverine is basically the focus of EVERY X-Men film but he’s just a catalyst for the larger story and re-introduction of the First Class mutants in 1973 and this is more or less their story. So Wolverine only has like one scene by himself and by the end of the film he’s just a cog in a much larger wheel.

I thought this film would be bogged down with a plethora of mutants with virtually nothing to do like the previous X-films but again, Singer and company made this very light on the mutant cast. There’s like a dozen of them in the far future fighting for their survival and they all have a purpose. In 1973, there’s about half a dozen trying to solve the possible mutant crisis with the Sentinels. There’s one small scene in Vietnam with a bunch of mutants being helped by Mystique but that’s all. There’s a spectacular action sequence involving Quicksilver that could be a better action scene than Nightcrawler fighting in the Oval Office in X2. Not only was it full of great effects but it was humorous as well making it even more entertaining.

The design and effects of the Sentinel robots were awesome; very nicely done. In the comics they are very large and bulky, clunky and goofy looking robots. Robots that one might expect late 70s-early 80s robots would look like. In the film they are closer to look to the T-1000 able to shift and move very fluidly and quick. There were scenes with the Sentinels that were actually somewhat terrifying, especially when they get the upper-hand. They also reminded me of the Ring-Wraiths or the Dementors from Harry Potter because of their shape and movements and the fact that they are faceless. Another aspect of this film is the edge-of-your-seat way they built tension to the fates of the X-Men in the future. Suffice to say, they are very out-numbered and out-“gunned.” This is a very bleak X-Men movie in a way.

The time traveling aspect was virtually without flaw. The consciousness of Wolverine was sent back in time to his 1973 mind, taking it over. In other words, he was his older future mind but in his younger body. There was no machines, science or magic involved in this process, save for mutant powers and there was nothing much to explain about the process. If Wolverine got into a lot of distress in 1973, and he lost mental control, it might’ve screwed up the stream of past/future consciousness and he would simply go back to the future body and fail in his mission. It added tension to some scenes and it also added to Wolverine’s memory loss subplot with Stryker making him Weapon X.

A lot of this film contributed to the fact of “correcting” past X-Men movie “mistakes” as well as continuing both The Last Stand/The Wolverine storyline and in a way combining The First Class storyline and characters. It sounds like it would’ve been complicated to do so without botching it all up but I’m more than happy to say that they achieved that goal. Everything is tied together in a great big mutant bow by the conclusion and every X-Men fan should be pleased with the results. If you were let down by Ratner’s Last Stand, then let me be the one to tell you, don’t worry so much about it. Singer’s back (and hopefully will stay) and he has made amends.

What fail(s):  I questioned how all of a sudden Kitty Pryde who can “phase” through solid matter can now astral-project a person’s consciousness into the body of their past selves. However, they don’t explain it—which sounds like a flaw but it also made it easier for me to fill in the gaps. Perhaps she evolved her powers to “phase” someone’s mind into another body. Sounds like I’m giving the film a huge pass on a possibly big flaw but in the original comic story, another mutant does it to Kitty Pryde and sends her back into her younger body. So making it Kitty in the movie is a bit weird, considering they could’ve simply came up with a new mutant to do this and made the doubt of Kitty’s powers disappear but again they didn’t bother explaining how she can now do it makes it easier to swallow also. “don’t ask, don’t tell” I suppose.

They tried again to work in the wavering allegiance of Magento, like every other X-Men movie and not a huge bother in this film but again, he goes from villain to hero/ally back to trying to prove that mutanthood will triumph over the human species and how humans’ fear will ultimately be the reason for the dystopian future we see in the beginning of the film. While I think Magneto is probably the best comic book villain because of his own internal conflict with trying to be a good mutant while still protecting his fellow mutants, in this film his motives alter with very little reason other than, “we need a villain mutant in the film.” Maybe if I saw the film again I might be more clued in on Magneto’s sudden change of heart but for now I’m still wondering. However, it’s not enough to cry foul and give the film a low grade.

Overall: As a long-time X-Men comics fan, I’ve been genuinely pleased with most of the films to date. Even parts of the stinkers (The Last Stand, the Wolverine movies) I can find something to enjoy. I gotta give a huge hand and respect to Hugh Jackman who loves his character of Wolverine with a such a passion and also has no qualms about giving the ladies some bare Jackman ass to ogle over (seriously, I think this is the 3rd or 4th time his tush has been shown). The man’s a true gentleman and artist who knows how to have fun and is grateful for his opportunities it seems. I’d like to see him play Wolverine for another few more films if he can muster it. He brings a lot of pride and soul to the series; as much as Patrick Stewart and Ian McKellen who, it also seems, hold their characters in high esteem as well. 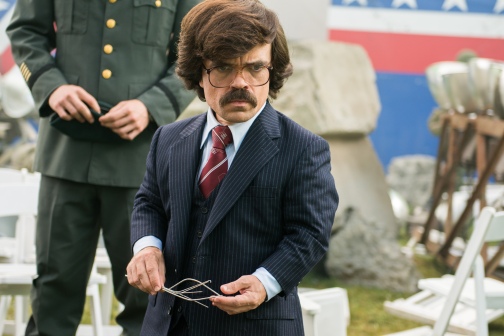 One of, if not my favorite, comic book movie was X2: X-Men United and now after seeing Days of Future Past, I can easily say that it is a close contender to matching or topping X2—I enjoyed every minute of this new film and cannot wait for the next installment featuring Apocalypse.

PS: Last friday I questioned who the mutant who can control the TV with his eyes was and thought it could be the mutant Blink. Well Blink is, in fact, in this film so I still don’t know who that kid is supposed to be.

21 thoughts on “Reel Quick: X-Men: Days of Future Past”