BRAD: So MUTO stands for Massive Unidentified Terrestrial Organism meaning they have not named the creatures right? Yet Godzilla was named because he’s awesome.

The one problem that stands out for me with this film is trust issues. People seem to put way too much trust that Godzilla is going to not only save them from the MUTOs and not still go on a rampage after he killed them and Godzilla trusts the humans too much that we’re not going to kill him immediately after he kills the MUTOs. We did bomb him a lot back in the 50s; you’d think he’d hate our guts with a passion.

The other plot point I’m a bit fuzzy with is the “balance of nature” Ken Watanabe was talking about. His theory was that Godzilla rose again to hunt down and kill the other MUTOs right? So if the other MUTOs didn’t come out of hibernation, Godzilla would still be sleeping down the bottom of the pacific?

And the MUTOs came to the surface to get nukes right or something with high levels of radiation but didn’t Godzilla also need radiation to feed on too? Wouldn’t he also attack a nuclear power plant or try to take the nuclear bomb the MUTOs were using?

BRIAN: They should have had a scene where they named the MUTOs. “Ok, this one is now ‘Commander Chickenwings’ and the female is ‘Mrs. Eggballs.”

I don’t think the humans had much of a choice in what Godzilla was going to do. And did you just say Godzilla had trust issues?

I guess. Apparently he absorbed enough radiation from the 1954 bomb to keep him sustained for 60 years.

Yeah you’d think he’d be hungry after all that. Maybe he absorbed lots of radiation from the MUTOs, like he fed on them. Was that the reason given for him attacking Tokyo in 1954?

BRAD: What did you think about the design of the MUTOs? Apparently every monster since 2000 has to look very insect like. Cloverfield, the idiot alien from Super 8 and even the Kaiju from Pacific Rim all look the same.

Godzilla SHOULD have trust issues but he doesn’t. He’s “Savior of the City!” He swims alongside the US Navy! He very politely avoided crashing into an aircraft carrier. He genuinely likes humans apparently. He didn’t deliberately destroy one building for fun or for spite.

I also find it funny that San Fransicans are so quick to call him a savior. Have they seen what he did to Honolulu?

Also there just wasn’t enough evidence to show that the MUTOs were destructive forces. Actually what I mean is they only want radiation and not bent on killing and eating people. That’s what I mean by destructive forces. They met at San Fran but I think that was inconsequential to the story; it was just the mid way point really. Then the female built a nest to hatch her babies which I’m sure would just need more radiation to survive. We didn’t see a MUTO eat one person did we?

BRIAN: I was fine with it. Would have been a little better if they weren’t so gray. And yeah the female one looked just like the Cloverfield monster. But what else would you really do? Maybe they’ll have Ghidorah or Mothra in the sequel.

I guess they just made him more like the ’70s Godzilla who was like protector of the Earth. This one didn’t seem to have much reason to knock over buildings just because.

Like I was telling you after the movie while we were drinking that beer out of the tap that looked like an old remote, I liked and appreciated this movie for all the things it didn’t do. Like the kid wasn’t annoying and didn’t get in trouble all the time. Chief Brody’s motivation was to return to them, he didn’t have to literally save them. Even though it did render his wife kind of pointless. But she wasn’t some damsel in distress either. I just thought the whole movie avoided a lot of clichés and boring storylines that bog down a lot of the big action blockbusters.

What does it matter if they eat people or destroy buildings people are in? They’re still dead. None of those Godzilla monsters eat people.

Well if they don’t care to eat people, they can simply feed them adequate amounts of radiation to appease them. Maybe regulate them in Antarctica or Guam—some remote and safe location and just feed them from time to time. Maybe Instead of throwing nukes into the sun, Superman can bring all the world’s nukes to the MUTOs. 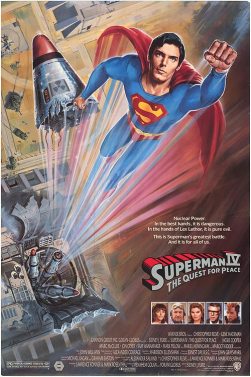 Like this, but if the nuke were a MUTO’s wiener.

But you’re 100% right in that they didn’t make a dumb Godzilla movie. I rolled my eyes very little at the movie and for the most part had a good time watching it. The second half anyway. Not enough action in the first half.

BRIAN: One thing I thought of, if the female was at a facility full of nuclear waste, why didn’t they just stay there?

I didn’t mind the first half that much. Yeah there wasn’t much monster action but they were trying to build a story. There wasn’t really a moment where I was like, “Come onnnnnnn, get on with it.” I just wished they’d had a Godzilla fight sooner and not done the cutaway thing. That was ok once but they did it a few times. Maybe there should have been a third MUTO that got its ass kicked by Godzilla earlier on.

BRAD: Good point. Both MUTOs were surrounded by nukes and both fled the scenes. Speaking of which, the female was always underneath the Yucca nuclear waste site? She didn’t travel there right? That was convenient.

The story was serviceable but I was annoyed at how long it took the title character to appear in his own movie. And cutting away the action was not a good idea. I read a review that someone compared the buildup to Godzilla to seeing Jaws but I don’t agree with that because despite not fully seeing Jaws we at least saw what he did to the people swimming. It took literally an hour and 15 minutes (in a 2 hour movie) for Godzilla to appear. That’s a long freaking time.

BRIAN: Again I’d complain more about not seeing Godzilla for a while if the human story was torture to sit through but I was totally fine with it. The original Gojira didn’t show up for a while either, and that movie is relatively short. Very few monster movies have the monster right out of the gate.

I’d watch the beginning again but if I caught Godzilla on HBO a year from now and it was at the Hawaii scene I’d watch the rest with no complaints that I missed the first half. My ticket getting to that Hawaii scene wasn’t as hard as yours. Plus, even the second half of Phantom Menace is horseshit.

BRAD: I’d start at Hawaii as well. But most of the central cast was pointless or used terribly or just for lame exposition, especially Brody’s wife and kid. Even Ken Watanabe was mostly filling space. And I don’t think his assistant knew what her purpose was either. I’m shocked I didn’t dislike the movie just based on that. I might with a second viewing though.

I would’ve loved this flick though of they had one decently long battle in the middle.

BRIAN: At least it wasn’t totally overloaded with pointless characters you didn’t give a shit about and there was no dumb comic relief character(s). Like Pacific Rim, Independence Day, Pacific Rim, etc. It was basically Brody getting back to his family during a monster attack. The assistant was pretty pointless but she had what, 6 minutes total screentime?

A big military battle against the male MUTO would have been good too.

BRAD: I’m not going to nitpick much more because I’m giving off the impression that I was disappointed in the movie, but the fact is I was impressed enough to recommend it to others and wouldn’t really mind seeing it again although I would take a lot of bathroom breaks in the first half.

One other thing I thought of was, how did the military/government cover up the fact that was a 50-meter tall monster alive in the pacific. Sure they said all those atomic blasts were tests but it’s amazing that they had such a great cover up for over 60 years. Actually didn’t Ken Watanabe know about Godzilla? Then again, how was this not more well-known?!

And did Godzilla just come up for air in the ’50s because what other monsters or MUTOs did he fight? And if he did fight other monsters how did they cover their presence up, too?

BRIAN: How many bathroom breaks do you need in an hour? I remembered you peed in your popcorn tub at least 7 times before Godzilla showed up.

Well Godzilla didn’t show up for 60 years so they didn’t have to worry about people seeing him. I guess Wantaknobby knew about the ’50s Godzilla attack, somehow, and/or the mythical legend of Godzilla, which turned out to be not so mythical.

I believe that this movie is intended as a sort-of direct sequel to the 1954 original, meaning he just came up and messed up Tokyo, then they bombed him, but I guess they didn’t oxygen-destroy him this time. But that brings up your earlier point that if he’s supposed to be the original Godzilla who destroyed buildings just because he was pissed then why didn’t the new one do that? Or maybe I’m wrong and just missed it that he rose up in 1954 to fight another monster, but why didn’t he just slide back into the sea like he did in 2014? Yeah that part’s confusing.

BRAD: I recently took up cocaine and I hear the bathroom is the best place to snort it.

“Well Godzilla didn’t show up for 60 years so they didn’t have to worry about people seeing him.” You just don’t forget a giant monster living in the sea like that. That’s a huge global concern that I’m sure there’d be a huge conspiracy theories about. Something that large and destructive isn’t that easy to sweep under the rug. It’s not like the Roswell aliens, where no one really saw them crash. If the Roswell aliens destroyed Santa Fe then sure, it’s a major concern but they did nothing other than supposedly crash and 1000s of people have theories and concerns over a government cover up. But a huge city destroying prehistoric monster isn’t that easy to disavow.

But again, just having fun nitpicking it. I can see the next film can address these issues about the cover up or at the very least a history of Godzilla on earth and introduce more monsters (like Mothra or Rodan) that he fought in the past.

All-in-all I think this was a crowd and fan pleaser. Like you said, it’s hard to make a monster movie with a non-boring and slow first half. Even most superhero origin movies slog through the first half. So hopefully the next Godzilla will be twice as good.

BRIAN: That’s why I wear 10 hollow skull rings filled with cocaine at all times.

Right, it’s an origin story, origin stories have slow first halves. The second one should be wall-to-wall Godzilla. But just think how much better this one was than Godzilla 1985 or Super 8 or Citizen Kane. The final battle was incredibly good. And the way he defeated the MUTOs, particularly the second one, was awesome. Usually the more I think about a summer blockbuster after I watch it, the more I seem to dislike it, but while this is flawed, I’m realizing how much I really liked it.