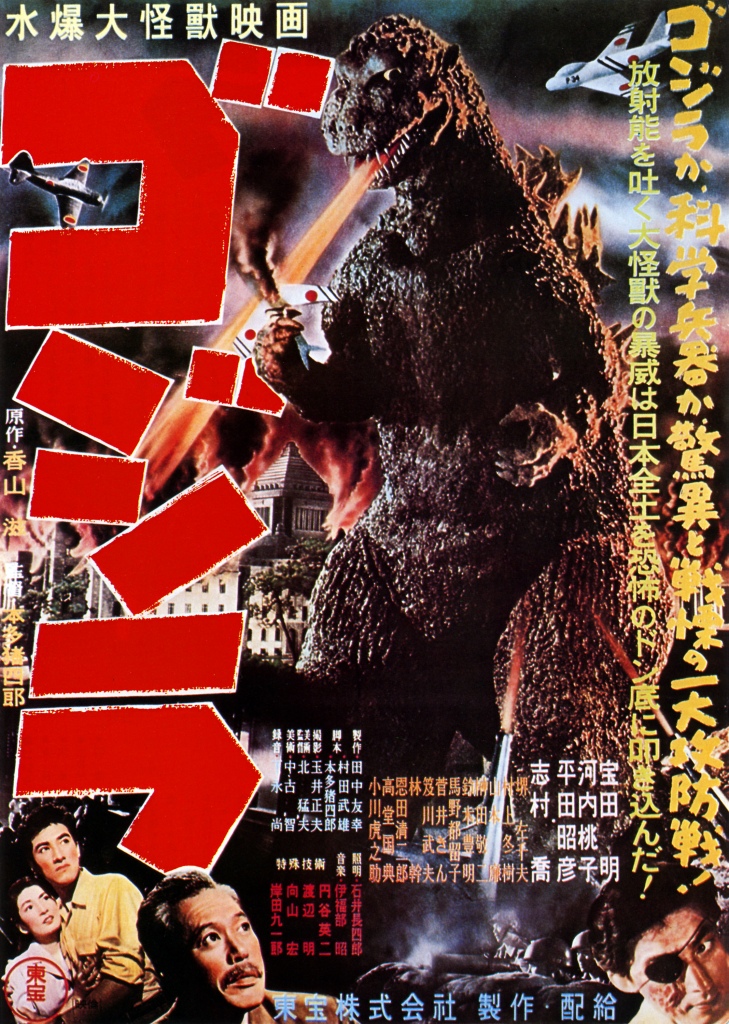 Synopsis: So Gojira (a.k.a. Godzilla) is basically chilling in the ocean, minding his own business, when atomic bomb tests annoy the crap out of him. But he uses the radiation he’s absorbed to his advantage, coming up to the surface to beat down some boats. Of course, the humans get their panties in a bunch about it, so he decides to really  teach them a lesson and bust up Japan.

What works: I’ve really only seen bits and pieces of this movie over the years and never really sat down and watched the whole thing in its entirety. What I’m reviewing here is the original, subtitled Japanese version sans-Raymond Burr. I’ve always been a fan of the character Godzilla, but I admit to only seeing most of his movies in fragments. Most of them are pretty goofy, especially the ones made in the ’60s and ’70s, but the original is very dark and serious, with scenes that show the horrors of atomic war through the filter of a giant monster movie. One scene that struck me in particular is during a Godzilla attack, a mother is on the streets, holding her three small children and looking up at this terrifying creature, and tells her kids, “We’ll be joining your father in just a moment.” Damn, that’s heavy. Usually in a giant monster movie there’s a little levity, but not in this. They wanted to get their atomic war point across and they did, although the references to radiation and atomic weapons can be a little repetitive by the end. Still, this black tone really works to set this film apart from all the other B-movie monster schlock during that time.

Where the movie really shines are the scenes of destruction. The suit looks great, and seeing Godzilla tear through buildings is satisfying without losing the sense of dread. Some of the miniatures do look cheap, particularly vehicles, but it’s shot in such a way to make Godzilla seem large and menacing and the destruction seem as realistic as possible. His atomic breath effect is even pretty good, although mostly it just looks like a fire extinguisher, but when he melts some power towers the effect looks cool.

The characters, while a little cliché, also work very well. You actually care what happens to them, which is a rare feat for a monster movie. They do some dumb things, but all of us would, too. The movie does slow down when Godzilla isn’t onscreen and you just want him to come back, but that’s the burden of every monster movie, and the characters, story and dialogue are a cut above the rest here.

Oh, and the theme song is utterly fantastic.

What doesn’t work: You have to understand, the filmmakers did the best they could with what they had at the time, and redefined the monster movie while also getting a serious message across, so you can’t be too harsh on this movie. But here are a few nitpicks:

Overall: A true classic of the monster movie genre that spawned one of the greatest characters in cinematic history. It’s much darker than you’d think, and that’s a good thing considering how stupid this franchise would get. I’m curious to see how unnecessary the Raymond Burr version is, considering how it tactfully removes most of the atomic bomb references. It seems like that whole powerful concept would be lost, especially since everyone who made this film actually lived through that, which is what makes this movie all the more engrossing. If you like monster movies and don’t mind subtitles, check it out.