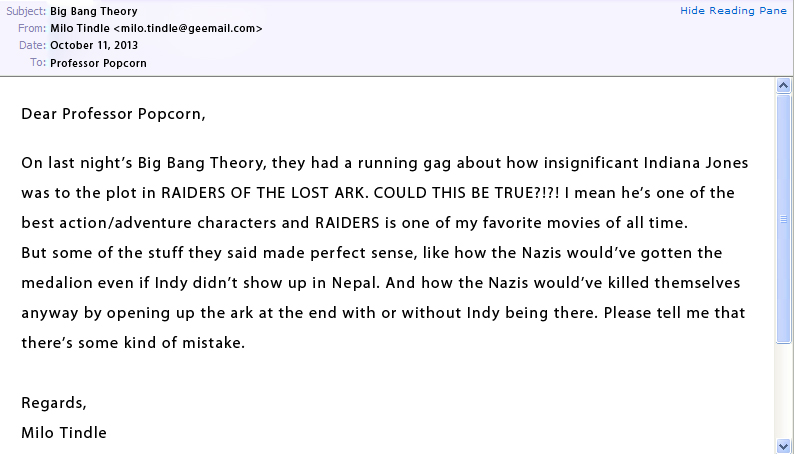 I feel your pain and countless others who have written to me asking the same thing, all terrified that their beloved action star is nothing more than a MacGuffin. I am doubly shocked that there are so many of you still watching The Big Bang Theory! Anyway, rest assured, while they made some valid points about how Indiana Jones did in fact mean very little to the outcomes of some plot points they are incorrect that he meant absolutely nothing to beating the Belloq and the Nazis. Do you recall the scene after he escapes the Well of Souls and has a big action scene with that odd-looking airplane? Well that plane was supposed to fly the Ark from Egypt to Berlin for Hitler. But Indiana Jones managed to destroy the plane and the Nazis had to retrieve the Ark again with their submarine by hijacking the Bantu Wind. So I would say that he did play a significant part in the outcome of the movie.

However, the more I think about this, the more I feel Indiana Jones could’ve played an EVEN MORE role in the movie’s potential history. If the Ark did get flown to Berlin for Hitler, he probably would’ve opened it himself with his  top SS and SA officials, killing them, thus preventing World War II and the Holocaust. So I guess Indiana Jones failed in some regard there huh? Some hero. Great. Now I’m bummed.

That is a great question. But it wasn’t a trick or illusion. Mola Ram has the power to rip out anyone’s still beating heart of their chest and hold their life in his literal hands. The sacrifice slave guy was only alive for a few minutes more because Mola Ram wanted him to be. If Mola Ram wanted to he could’ve squeezed that heart and killed him instantly. Or if he threw it on the ground and stomped on it with his sandals. I know this because a protege of mine, Dr. Robert Elliott, studied the ritual with an actual Thuggee cult priest and quite surprisingly was able to rip the hearts out of most animals, like goats, chickens, monkeys and even a cow once but was never successful with a human subject. He died attempting to rip out a horse’s heart out when the stallion kicked him in the throat. 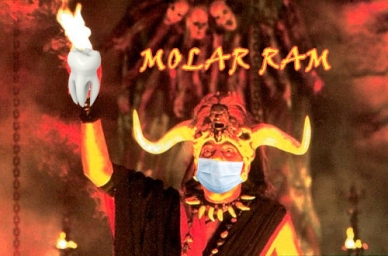 Since Mola Ram was so good at ripping out hearts, imagine how good he would have been as a dentist doing a tooth extraction!