That was so good, you should watch it again (this one is extended, but darker, like brightness-wise) 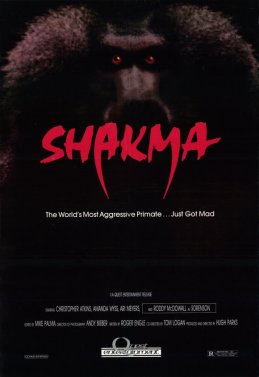 What’s It About: Nerds run afoul of murderous baboon. 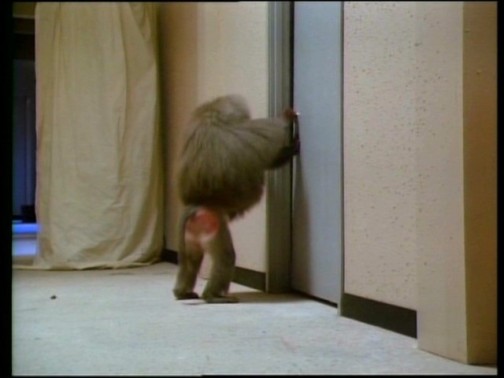 “Hey can I get some cream?”

Oh, Shakma. You killed me but I just can’t stay mad at you.

Is It Actually Scary: If a baboon killed your entire family then maybe. Otherwise it’s more adorable and hilarious than anything.

Worst Scene: The entire grueling setup with the dumb Dungeons & Dragons game. It goes on forever and it’s not even necessary as a setup, just have everyone working late in the building. I suppose it was so they can explain why the doors were locked… but… they’re on the inside…

Overall: While trying to decide what to watch, we pulled up the above trailer for Shakma, and laughed nearly to the point of asphyxia. The full movie didn’t quite live up to the outstanding trailer, though. It was too slowly paced, the characters were too dumb (despite being scientists and doctors and dungeon masters), Shakma was just too adorable to be taken seriously, and it seems like he should be too easily defeated. He’s a baboon, hit him with something. But the movie makes it seem like he’s virtually indestructible, even though they just made him more aggressive. Honestly, you can just watch the trailer (maybe 50 times or so), that hysterical montage above of Shakma banging on doors, and this compilation of death scenes, and you’re better off than watching the whole movie. Or get some like-minded friends together with some beers and watch the whole thing, just fast-forward through all the Dungeons & Dragons crap. It’s technically a pretty lousy movie overall, but it’s so much fun you won’t care.