What’s It About: A lovable St. Bernard is turned into a vicious killer when he gets rabies. Poor mother and son are trapped in a shitty pinto (redundant?) for days while under siege of the savage beast. 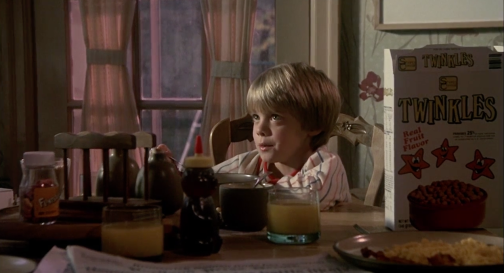 Her slugging average is out of sight!

Scare Level: Not bad actually. Having a very trustworthy breed of canine becoming the monster can give you pause. I mean, the whole mystique to the St. Bernard is the saving people on snowy mountaintops with that small barrel of booze around its neck. Now it’s head butting a pinto until his head bleeds to try to kill a very effeminate boy and his mother. Plus that one jump scare is one of the best in film history.

Gore Level: There’s some blood but not over the top for gore fans. It’s all done in a realistic manner.

Best Line: This film really didn’t have the best quotables but I did like the motto of “Broads, Booze, Baseball!”

Best Scene: Tough call really. I did love that first jump scare but this other scene of Dee Wallace losing her cool to her paranoid and panicky kid screaming for his daddy is top notch as well.

Worst Scene: The film has about 40 minutes of Dee Wallace and an annoying Danny Pintauro stuck in a Pinto. While some great tension and scares were in this half of the film it also got a little stale with Dee not thinking of any clever ideas to escape or fight Cujo. I can’t think of a particular scene per se to call the worst but over all I just with there was more to the Pinto trapped aspect of the flick.

Overall: So this is my first of 10 Stephen King flicks that I will be covering. I have stated in the past that I am not a big King fan (books or movies) and never read any of his books. Brian and Jim actually like King and read his stuff so I am the most ironic and least qualified to tackle nothing but King flicks all month. But that’s how I roll, I like a good challenge. With over 500 film adaptations we could’ve easily made this year’s Schlocktoberfest nothing but 31 days of King movies but we agreed after two dismally awful years of month-long themed reviews that we we never doing that again. But again, I like a challenge. Cujo has a great original premise of a giant rabid dog terrorizing a fraught mother and a very timid little son in the worst possible small vehicle of its time. You would think that having half the movie set in a broken down Pinto would be boring but the filmmakers did their best to heighten tension and leave us the audience on the edge of our seats. while the back story of the infidelity gave some weight to the characters it really didn’t amount to much or add to the characters’ depth or development. But without it you would only have a 45 minute movie of Dee Wallace and Danny Pintauro stuck in a Pinto. For its time this is a great horror classic and I highly recommend it. You’ll have a howling good time.

Score: 8 Red-pissing Twinkles Cereals. Nope. Nothing Wrong Here (out of 10)

For our other Stephen King movie reviews, check out:

Children of the Corn

Tales From the Darkside