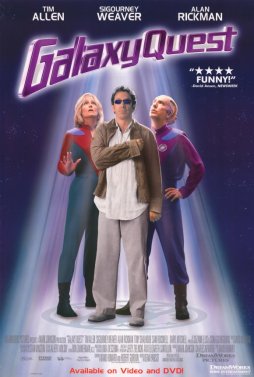 The Scene: The Chompers!

Why We Love This Scene: I nearly missed the brilliance and fun of this film when it premiered back in 1999. I didn’t catch it after friends told me it was worth a watch when it was on home video a year later. I think it was just that it starred Tim Allen and even though I don’t mind him, he’s not a draw for me at all. I’m still not sure I watched most of Home Improvement when it was on the air. His stuff tends to be on the hokey and cheesy end of entertainment like The Santa Clause, Big Trouble and Christmas With the Kranks. But with the ever-so-beautiful Sigourney Weaver and the ever-so-delightful Alan Rickman I had nothing to fear right? Fuckin-A! It exceeded my expectations completely. I thought it would just be a lame spoof of Star Trek but it was much more than that as it lampooned TV shows in general. This scene in particular where they have to navigate through a series of inexplicable large metal chomping mechanisms like an old side-scrolling Nintendo game. All the while Sigourney is complaining about the absurdity of the chompers and why they have to go through such a task. I find it extra funny now that Attack of the Clones more or less copied this same type of dumb video game premise in the droid-building scene. This is just one in a butt-load of hilarious scenes of an underground modern comedy classic. I read recently that they are thinking of doing a TV show based on the movie and for that I say: Balls! It’s like they didn’t even watch the film!! How is this concept going to sustain a whole season-length? I can see adding more fish-out-of-water scenarios with the human actors being thrust into their new reality in outer space but I can also see this premise getting old real fast.