Reel Quick: Guardians of the Galaxy 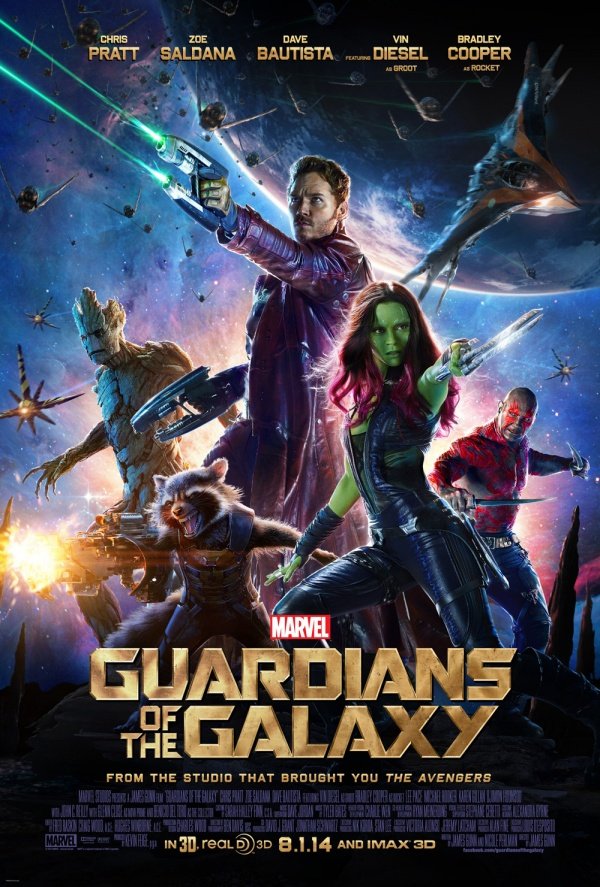 Synopsis: A rag-tag group of outlaws, mercenaries and criminals form an uneasy alliance when a mysterious orb with catastrophic power falls in the hands of a maniacal super-villain. Also, I am Groot.

What work(s): The cast is phenomenal together. I guess since The Avengers, I have not seen such chemistry in a superhero flick. I seriously can’t pick a favorite out of the five Guardians. All the other characters and actors were top-notch as well. Benny del Toro has been out the spotlight for a while and I sure missed him. Michael Rooker is still doing great playing the same rogue bad-ass he has been for the past 3 decades. And John C. Reilly was his usual bumpkin self as well. And Glenn Close said “prick” in a kids movie which made me smile. Even for Glenn Close. 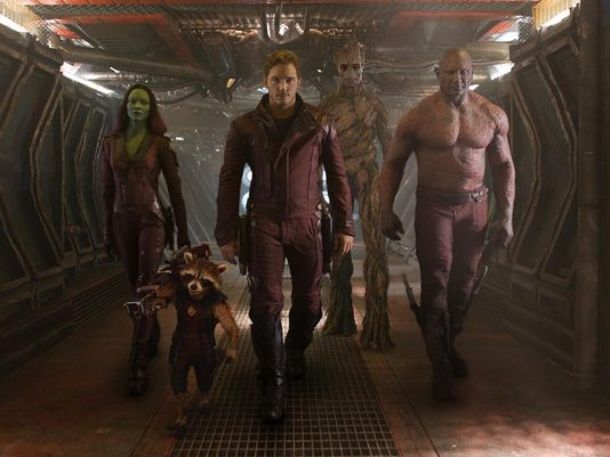 The action and/or adventure was also great. I’m sure if you read enough reviews of this film the words “star” and “wars” might show up and possibly side-by-side and the comparison is justified. This is a space opera with the Marvel Comics flare. While the Avengers and Thor just kinda teased us with the greater and expanded universe of Marvel’s pantheon of heroes and villains, this film introduces us to the other side and fleshes out more incredible characters that hopefully will be crossed-over with the Earthly heroes and villains.

The humor is also a key component to the success of this film. I knew from the beginning that by hiring James Gunn to direct that this film would not be taken seriously. Not that any comic book movie should but there’s a huge difference between The Dark Knight and Man of Steel and The Avengers and Guardians of the Galaxy. And that’s a good thing. No one really wants a sad and depressing superhero movie. I’m looking at you—SUPERMAN! But Guardians had way more tongue-in-cheek humor than The Avengers and I was fine with it. It has a talking tree and raccoon in it. 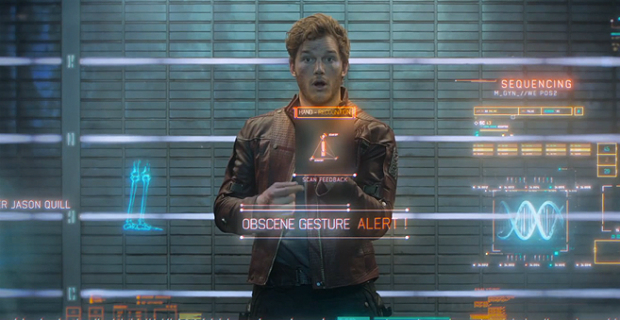 The Music. Chris Pratt’s character Peter Quill actually carries around a 1980’s Walkman with a mix tape of 70’s gold pop songs which are played heavily in the film. Comic book movies of late suffer greatly with popular rock music and that’s just sad. They don’t need a Bat-Dance type soundtrack but they don’t even have original songs inspired by the movie anymore. I think Raimi’s Spider-Man trilogy was the last to do that. But the mix tape gave this wacky sci-fi actioner even more levity. There’s a really crazy scene in the finale that totally had me squirming in my seat it was so off-the-wall. I wanted to hate the scene but I couldn’t help but laugh at it. I’m curious how other viewers took this scene. The only thing was Peter was a child of the 80s but he only had his mom’s mix tapes of 70’s classics. I’m not sure if 80’s hits would make the film more dated (if that makes sense) or the fact that most of the 70’s songs were obscure enough that it felt fresh, especially to a mostly millennial crowd. Also, I am Groot.

What fail(s):  Not much fails. This is a very solid summer blockbuster and an excellent comic book romp. However, the main villain could’ve used some work. When we meet this mad man, Ronan he basically kills a man within minutes by crushing his skull with a huge space hammer. But that’s about it in terms of how sadistic he gets. Mid-way through he has a fight with Drax the Destroyer and doesn’t even kill him but throws him in a pool of yellow liquid. He then betrays Thanos, takes all the power of an Infinity Stone for himself and goes off to annihilate a planet with very flimsy motive. Oh well. He looked menacing and sounded great but ultimately, kinda dull. His minion, Thanos’ daughter, Nebula is quite the bad-ass and dare I say it, eye-pleasing. We’ll see more of her later.

The only other thing I can nitpick is the finale. Oh the comic book finales. It’s such a bane on their existence. Its always a shame when a great comic book movie is awesome until the finale. I sympathize with them though, it’s never easy to write a great ending to a film much less a comic book one. Even The Dark Knight‘s ending was a tad lackluster. But even Guardians suffered a little with such a mediocre finale to the villain(s) demise. However, I am Groot.

Overall: Marvel’s clout and balls were way out there with this film, their big gamble since The Avengers and I think it paid off handsomely. I say let them take as many risks as Marvel wants because when they seem to do really well surprising us. Keep using odd choice characters. Keep hiring odd choice directors and actors too. Whatever you’re doing Marvel, keep it up because we’re all having a great time. If only DC would stop, look and listen to what Marvel’s doing. I have very little faith and interest in the Superman Vs. Batman movie. (I would rather watch Ballistic: Ecks Vs. Sever!) But give me a Dr. Strange and Cloak & Dagger movie any day. In conclusion, I am Groot. 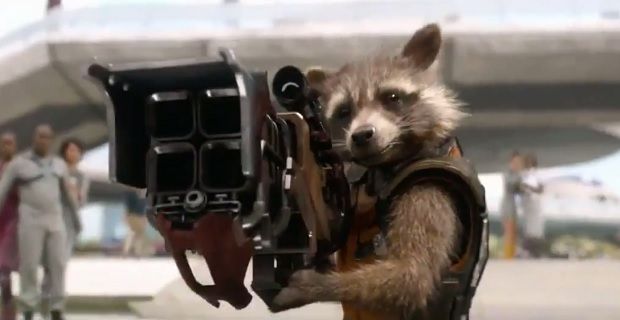 PS: Be sure to stay for the post-credits scene for the Greatest. Cameo. Ever.

PPS: Both Brian and I went to his local cineplex to see the 8:30 show. About 90 minutes in, there’s a scene when Ronan betrays Thanos and takes the Infinity Stone for himself. At the exact moment he opens up the orb that houses the stone the movie stops and the auditorium emergency lights come on! It was the freakiest and best timing EVER. Turns out, the power cut in half of the mall attached to the cineplex! We were ushered outside to wait. There was very little explanation or direction, which was kinda unprofessional on the theatre’s part. There were no managers around at all giving assistance. Oddly enough no patron raised a stink about the situation. Everyone just waited outside texting or doing whatever on their phones and slowly just dispersed. That’s one sure sign that the youth of today are basically indifferent zombies. All the kids just left. I mean, there was nothing to do but I was shocked there weren’t more complaints, yelling and/or pandemonium. Brian & I waited about a half-hour before we called it quits. 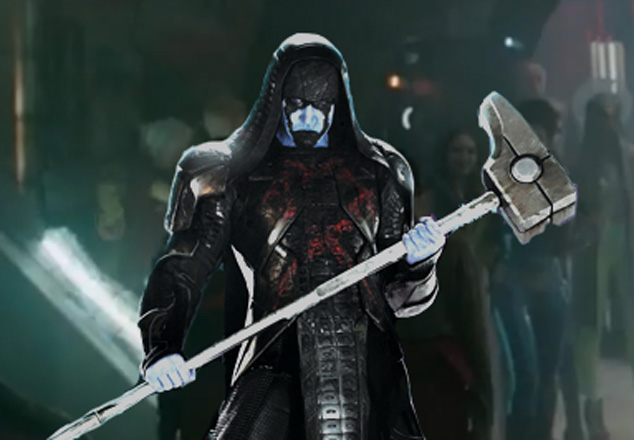 However, on my ride back I suddenly had the urge to finish the movie and decided to go to a different theatre and rewatch the movie and finish it. Glad I did. It was worth staying up well past my bedtime.

So next week, we’ll have a more in-depth review between Brian and I when he finishes the film over the weekend if he can. I am Groot.

15 thoughts on “Reel Quick: Guardians of the Galaxy”