Mission Log: Small Maryland town is run afoul of multiple aliens that happen to be extraterrestrial zoo specimens. While the sheriff and mayor struggle with this dilemma, they hire a strange expert that can help them capture the aliens.

The Dohler Side of the Moon 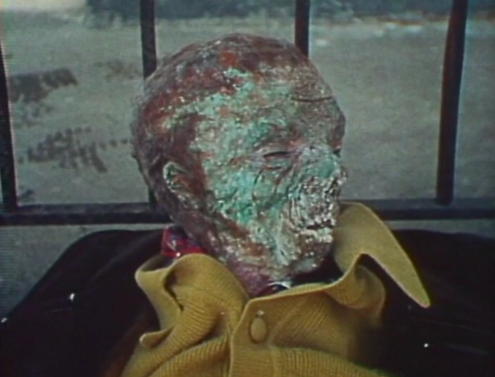 You have to properly seal your corpse airtight otherwise it spoils

Phobia Level: We seriously need to stop asking this question.

Sick Bay: Barely a drop of blood. Guess Dohler couldn’t afford fake blood. Or figure out how to make it.

Heavenly Bodies: The Zagatile flashed his cock the whole time!

Best Transmission: There’s not much good dialogue nor bad dialogue just terrible delivery of the dialogue. However, I chuckled at the sheriff telling the mayor about Zachary, “So he’s killed one creature.”

Most Successful Experiment: For a first time inept director, this wasn’t as amateurish as I imagined it would be. The alien creatures were done well enough for something this schlocky.

Experiment Gone Awry: I’d have to go with the Zachary/Leemoid battle. So much to unpack in that scene but the fact that Zachary was fighting a giant lizard creature armed with only a large stick and just so happens to defeat it. the superimposed creature, which was stop-motion animated, looked fucking terrible. In some shots you can still see the original ground or table the claymation creature was on. It was bad on so many levels.

Damage Report: Surprisingly, that was my first foray into the wacky world of Don Dohler. Well not entirely true, Brian and I attempted to watch Galaxy Invader twice before having to bail on it. But The Alien Factor was way more entertaining than I would ever imagined. It’s very Ed Wood-esque in it’s charm, tenacity and amateurishness. Donny gave this his best shot and dammit, I’m going to give him some credit. Sure it looked like crap visually—whether it was the graininess of the film, the inadequate lighting, the half-assed set design or even the dirty camera aperture; the acting was student film-level as well as shoddy second-rate special effects—it still managed to give me a decent time. I’m very shocked. Maybe I should seek medical attention.