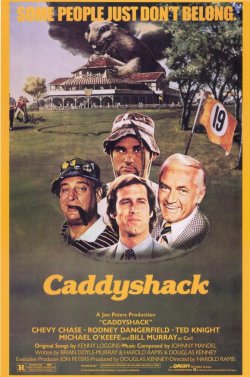 The Scene: The Greatest Double-Take in Film History.

Why We Love This Scene: Ah, Caddyshack, a movie you have to appreciate more and more with every viewing as long as you fast-forward through the parts with Danny and his Irish girlfriend. There are so many great lines and scenes in this movie, especially by the four gentlemen who appear in the giant hole to your left (or is the hole normal size and they’ve been shrunken down by the evil monster gopher… more on that here). The show is stolen by them so much that it’s easy to overlook the little things that are also hysterical. By far my favorite part of the entire movie, and has been for years, is the bug-eyed double-take by the fisherman when Al Czervik nearly runs him down with his yacht. There really isn’t much more to add, but it has to be by far the funniest double-take ever committed to celluloid, especially considering how far this cat’s eyes pop out. But I’ve always been a sucker for that, and also when a drunk guy sees something unbelievable then looks at his bottle then throws it over his shoulder. But that’s a post for another time.

Notice how when they show a close up of the bow of the yacht it’s a reverse shot. Seems pretty obvious and I’m surprised they even used it. Anyway, here’s the full scene in all of its glory:

Or you could watch this all day like I’ve been: