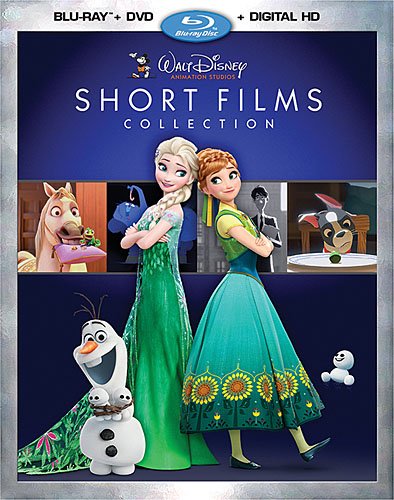 Synopsis: A collection of Disney short films of varying quality and horror.

Films Included
John Henry: One of the cooler American Tall Tales. Seems like they were going to make it into a feature length film but decided against finishing it. The animation has a raw pencil-drawn look to it. John Henry dies, so, that’s pretty awkward.
Worth Watching?: Eh. It’s not bad up until John Henry works himself to death.

Lorenzo: A rude cat’s tail is cursed and comes to life. Was never released because it’s incredibly weird and violent and the cat mutilates himself at the end.
Worth Watching?: No real reason to ever do that to yourself.

How to Hook Up Your Home Theater: A Goofy short done in the classic Goofy short style.
Worth Watching?: It’s cute enough.

Tick Tock Tale: Clock is an asshole to other clocks but then all the clocks are stolen and the asshole clock saves the day but it’s still kind of an asshole but the other clocks respect it now.
Worth Watching?: You wouldn’t really miss anything if you didn’t.

Prep & Landing: Operation Secret Santa: Mrs. Claus has elves steal a toy part from his office so she can complete an old toy for him. Although she probably could have just asked him. Supposedly he’s pretty nice.
Worth Watching?: You probably already did. They ran it on ABC Family 648 times last December.

The Ballad Of Nessie: The Loch Ness Monster gets pushed around by some Scottish stereotypes and cries until she’s made a lake to live in.
Worth Watching?: Teaches kids that crying will get you what you want, so no.

Tangled Ever After: The lizard and the horse lose Rapunzel’s wedding rings and must retrieve them or die trying.
Worth Watching?: It’s 7 minutes of pure slapstick and animal cruelty, so yes.

Paperman: Man uses paper airplanes to get girl he barely knows.
Worth Watching?: It’s heartwarming in a creepy way.

Get A Horse!: Pete the Jerky Cat tries to kidnap Minnie and kill Mickey, so Mickey tries to kill him instead.
Worth Watching?: It’s neat but it was much cooler in the theater in 3D. Watching it at home just isn’t the same.

Feast: Selfish, gluttonous dog eats everything off the floor and wrecks his owner’s marriage. But eventually gets them back together again and they have a baby who he’ll probably try to eat eventually.
Worth Watching?: Yeah. Adorable.

Frozen Fever: A horrifying tale of a sorceress who can create freakish life on a whim. Where was she when that poor Russian girl froze to death??
Worth Watching?: You haven’t already?

Rent it, buy it or avoid it?: Rent. Most of these shorts are worth watching, however, if you have a little Disney fan you probably already own those shorts since they’re featured as bonuses on the Blu-rays of the most popular recent Disney films. The big draw is obviously Frozen Fever, which is on the Cinderella Blu-ray, but to hell with that. Fortunately, this is surprisingly available on Netflix Instant. But I strongly implore you to skip ahead to How to Hook Up Your Home Theater. I believe it starts at 24:45. And let’s never speak of what precedes it.

My Daughter’s Review: Laughs her head off at the sneezed snowballs in Frozen Fever and the slapstick of Tangled Ever After.