Check out our review of Halloween Kills here! 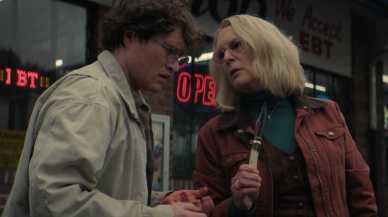 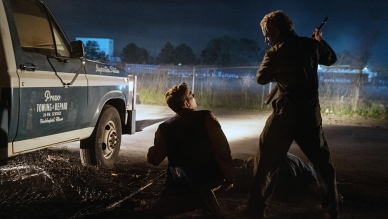 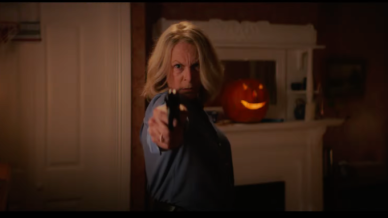 Jim’s Final Thoughts: This movie might grow on me in time, and I’m sure it blew some Halloween fans’ minds. But right now, like six vodka gimlets and lobster thermidor – it’s not sitting very well. I had said to Brad a few weeks before this was released that I didn’t think I was gonna like it – just a weird feeling I got from the trailers. I avoided any spoilers (not like they were any really) and I probably shouldn’t have. The last part of a trilogy is not when you experiment with the plot – it’s when you wind things up. This movie could have had some of its elements in Kills, and then have a huge fan service Laurie vs. Michael massive ending in Ends.

Blumhouse has now lost the rights to the Halloween franchise and they have reverted back to Malek Akkad. What he does with the franchise from here on out is going to be probably under the most scrutiny, since this trilogy was pretty much embraced by the Halloween fans. All of the fan sites are saying the same thing: a remake of Halloween 3: Season of the Witch. I would be all in on that. As Andor has taught us, not everything has to be about the fucking Skywalker family to kick ass. Maybe Halloween should finally be turned into the anthology series it was briefly considered to become. That way all of the past actors can come back in a new form. Danielle Harris, P.J. Soles, Tom Atkins, Ellie Cornell, Scout Taylor-Compton, Hell, even Tina Kaplan – can all be part of the fun again.

But for now the big question is: in time will Corey be embraced by the fans like Jaime Lloyd from Halloween 4 or will he be constantly shit on like the Man in Black from Halloween 5? As Brad mentioned in the observations, I guess the life lesson from Friday the 13th Part 5 The New Beginning was not learned here: replacement killers do not work with franchise icons. But I’m not gonna end my final thoughts with a bunch of divisiveness, bring us all together Ronnie James!

Jim’s Score: 5 Baskets Of Frank’s Vegetables On The Front Porch (out of 10)

Brian’s Final Thoughts: No exaggeration, the only two parts of this picture I liked were when Corey torched that Boston kid’s mouth and when Michael got ground up. The rest of it makes all other Halloween sequels look like horror masterworks in comparison. I didn’t give a sewer bum’s solid shit about Corey’s story, Allyson’s absolutely asinine love affair with him, Laurie’s backwards trauma recovery, anyone else that died, or anyone else that lived. You don’t get points for trying something new if it’s a miserable failure that’s completely uninteresting and has to be padded with lazy symbolism and homages rammed up your ass every 3 minutes. That’s not a movie, that’s a cheesy fan film with a budget. Maybe someone could take all three movies in this trilogy and edit them together into something semi-decent (like removing most of Allyson and her boyfriend in 2018, the hospital scene in Kills, Corey from Ends, etc.) But as far as Halloween Ends goes, there’s no way in hell or Haddonfield I would ever waste my time watching this again, no matter what holiday it was.

Brian’s Score: 3 Awful Halloween Movies, Congratulations, Guys, You Did It (out of 10)

Brad’s Final Thoughts: Well well well, what a strange turn of events this movie hath wrought. I’m just as shocked that I kinda enjoyed this movie. And I’m not saying “kinda” to pad my actual disdain or enjoyment or to not sound like a misfit but I genuinely sorta, kinda, in-a-weird-way liked it. Mostly because of the strange direction they took this film and franchise. David Gordon Green and company took the wagon that the fans were more or less happy with and careened it off a fucking cliff. Bear in mind, this is not a great movie. And like Jim said you don’t subvert that much expectation and experiment with the third and final installment of a trilogy like this. Especially when the first two were by-the-numbers of what a typical Halloween movie should be. Halloween Ends is a terrible movie in context of the trilogy—no question or doubt about that—but on its own, it’s still awful but I complained after both the 2018 one and Kills that I wanted something different and fresh and I have to give them props for delivering on that. However, I already watched it twice because I wasn’t 100% sure my enjoyment of the flick was based on a false impression (my first time I was inebriated and writing notes so my mind wasn’t completely focused) but even on the second viewing I kinda liked it again. I know, I know it’s fucking crazy.

Maybe I’m getting soft in my old age but I appreciated the thematic elements about evil and having a seemingly good person slowly(!) descend into madness and evil. However, like we’ve been saying, start the trilogy that way, not end it condensed into one film. We compared this to the Star Wars sequel trilogy with its rebooting nature, bringing back old actors and the fan service and its totally misguiding direction of where the story will go and we’re not far off with that comparison. Corey should’ve been introduced in the first film. Brian mentioned recutting this trilogy and that’s not a half-bad idea. In fact, I would say have Corey in the first film and edit his arc and story throughout the rest of Halloween (2018) and Kills. I’d do a re-edit but I have less important things to do unfortunately but I’m sure some Halloween mega-fan will do something.

Don’t get me wrong, there’s a ton of shitty decisions and ideas just in Halloween Ends alone and I totally agree with a ton of what Jim and Brian are saying. I more or less feel bad for the huge Halloween fans that this disappointed. I’ve always said that Halloween and Michael Myers wasn’t my favorite slasher icon so when they messed around and experimented with weird new ideas, I guess I felt that the character(s) weren’t sacrosanct enough for me to care. Plus, like Jim said, the franchise is back to Akkad and we all know there will be a ton more Halloween movies coming so I’m not going to complain about Halloween Ends and its very unusual premise and final take. After all, Halloween III: Season of the Witch was a subversion of the norm and it’s still great. It may have taken a generation or so for Halloween III to be the cult classic it is today but still. Only time will tell if Halloween Ends will have the same fate. All I do know is Danny McBride and David Gordon Green should probably just stick to comedy.

One thought on “The Schlocktoberfest – Day 31: Halloween Ends”