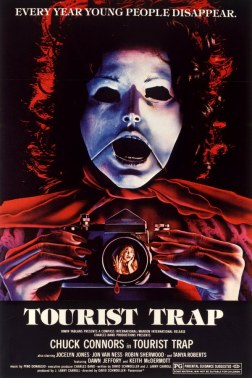 What’s It About: A group of twentysomethings runs afoul of Chuck Connors and his unnecessary psychic abilities. Based on true events.

Scare Level: If you hate creepy dolls and doll-like things this movie would be a total frightfest for you.

Nudity Level: It seemed like if Tanya Roberts leaned the right way there would be more popping out than a closeted guy at a New Year’s Eve party but nothin’.

Best Line: I honestly don’t recall any good lines, but I’ll never forget what Slausen said about a man’s rights…

Best Scene: Woody’s death with the silent scream and his blood trickling through the pipe was great.

Worst Scene: Probably the short comedy break when Slausen eats crackers with one of the mannequins.

Overall: I’ve actually seen this picture before a few years ago but didn’t remember much about it, just that I thought it was pretty good, and every single thing I’ve watched this year has been totally mediocre, so I wanted to end with something that possibly wasn’t. And guess what? It was above mediocre! It’s not amazing or anything and is basically The Texas Chainsaw Massacre and House of Wax telekintetically bound together with plaster, but it’s fun, well done, and hung. Chuck Connors does an excellent job, and Jocelyn Jones, who plays Molly, is a great final girl, and Tanya Roberts also lends it a certain kind of credibility. It probably could have been better if you can one iota of a shit about any of the characters other than Slausen. Like eight minutes of backstory or conversation about something between them to give them a little life before their death would have been nice. But other than that, very solid and recommended, just try to find a Groupon before you buy a ticket to this tourist trap.

Score: 6.75 Instant Automaton-making Machines (out of 10)