By both guest Schlocker Jim and Brad

What’s It About: Faust meets The Phantom of the Opera meets Dorian Grey meets glam rock, with a soundtrack by the genius that is Paul Williams, (who also stars as the film’s protagonist) and directed by Brian De Palma. I could go on, but I don’t think I have to.

Just look at how crooked the zero is? Absurd!

“Mr. Williams? Yes, Daft Punk is on the phone and they want you to record an album with them. Could be a big seller.”

And my soul from out that shadow that lies floating on the floor, Shall be lifted—nevermore!

Remember how to make this face Jess; you’ll be in “Suspiria” three years from now.

Scare Volume: Jim: The poster’s tagline describes it as a “horror phantasy” which works perfect. With absolutely no respect to the Osmonds, I’d say it’s a little bit horror and a little bit rock and roll.

Brad: The only thing scary about this movie is that it’s just a cult classic and not that well known. I didn’t see it for the first time until a decade ago when Jim copied the DVD for me. It should be played in midnight shows as a double billing with Rocky Horror. It’s very campy and fun and one of the best soundtracks to boot.

Gore Volume: Jim: Record press-face melting and some blood here and there, but nothing too extravagant.

Brad: I like how low-budget and gruesome Leach’s maimed face looks by the finale. Swan’s melting face is “cheesy” too.

Brad: Sadly, the world will never see Paul Williams’ Little Enos at the height of his prime. Speaking of prime, we never see Beef’s Grade-A choice either. And it will be one more movie into her career to see the lovely Jessica Harper nude.

Brad: I’d have to go with the insanely over-the-top Beef electrocution. The faces Gerrit Graham makes being jolted are downright hysterical. 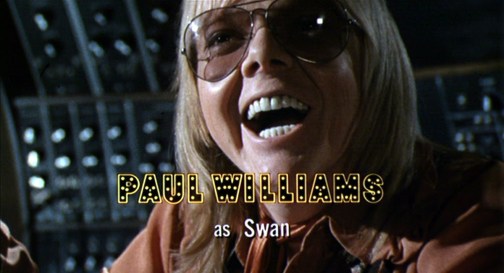 Brad: I have to say the finale. Every time I see this picture I always wish it was more gothic in nature. A more personal battle between Swan and Leach. Instead we get a very rushed and hectic as well as chaotic mess of an ending with audience members screaming and fleeing and a now dying Swan and Leach dying. I would’ve loved a high tower, damsel in distress, hero sacrificing himself type ending. Plus, it always annoys me that Swan hires a sniper to kill Phoenix. Not very in touch and tone with the rest of the horror phantasy in my opinion. Minor nitpick really as the rest of the film is golden.

Jim: Then I’ll lend you the novelization of the film – VERY different story. 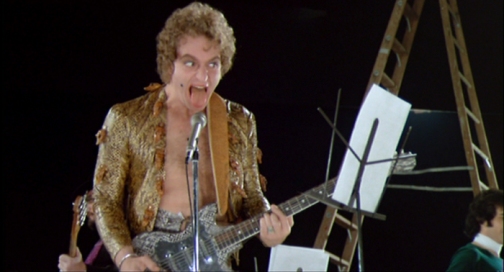 Beef during his audition to replace Gene Simmons. They decided to keep the original.

Band Rating: Jim: If David Bowie and Lon Chaney fucked Kiss, and their child was Mephistopheles – who could direct like Alfred Hitchcock and play guitar like Hendrix; it would almost be as good as this movie and its music. Goes To ELEVEN!

Overall: Jim: In my tenure here with the boys, I have shit on movies like they were actresses in Japanese porn, so for what seems the second or third time; I will give a perfect review of a movie that is very “Special To Me.” My fifteen–year-old self found this movie in our local video store in what seems a lifetime ago. Since then I have owned every video format of the movie possible, and the soundtrack on formats that most of you kids today can only see when you Google-image them. It’s one of those movies that you want your friends to experience – not so much to take the credit for finding it, but re-enjoying its discovery through new eyes. It was a long time coming, but I have dined on honeydew and finally reviewed Phantom of the Paradise.

Brad: Back in the dark days long ago (circa 2004) when I was still breaking my balls as a lowly office drone graphic designer I met a dude, who I knew the moment I met him, was a real cool dude and that we were kindred spirits. He had mini horror movie posters (as well as George Carlin quotes) all over his cubicle wall. One of those posters was for Phantom of the Paradise. Like I said back then I had only heard of the De Palma classic but this new coworker of mine corrected me right so. Jim and I quickly became good friends (Brian came from this same hell of employment as well) and we all quickly became buds with the same penchant for movies and it was only a matter of time we all got canned there and Brian and I started this little movie review/tribute website thing. But back to Phantom of the Paradise—I have my dear friend Jim to thank to showing this classic of a film to me. His enthusiasm for this De Palma masterpiece was key to me understanding and appreciating it. With every new viewing of it I find something new to enjoy and I grow fonder of it. I joked a few times that it should be a Criterion Collection title and I’m not really joking. This was a very early Brian De Palma movie. This was before Carrie, Blow Out and Scarface. Just look at the credits or titles for this film and it stands out above most of the contemporaries of its time.

It’s campy but not stupid. It incites huge literary and cinematic references without being hokey about it. It has a tremendously awesome soundtrack and unforgettable performances. It still bugs me that this movie doesn’t get more recognition. It may have been an early effort from a not well-known director but it wasn’t even a low budget or independent feature. It was produced by Twentieth Century Fox and Edward R. Pressman who has well over 80 feature films produced so far and not all of them stinkers; Wall Street, Conan the Barbarian and Badlands just to name a few. So this movie should be more well known in my opinion. But sometimes the better films are the ones you share with a small community of fans or just close friends.

3 thoughts on “Schlocktoberfest V – Day 31: Phantom of the Paradise”