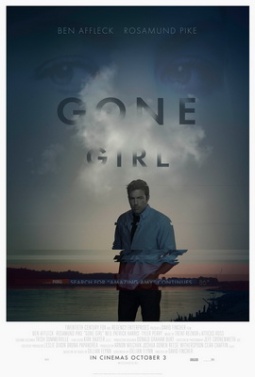 Synopsis: A thriller about a mystery of a disappearance of a possible homicide of a young married woman (Pike) by her seemingly cold and heartless husband. But things aren’t always as they seem and with the help of a media explosion and witch-hunt things get out of hand. 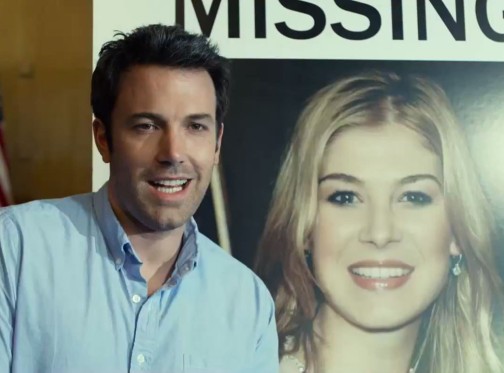 What work(s): The acting is top-notch. Even from Affleck. I’m still not sold on him as a great leading man except when he plays a man who is out of his element like in this movie. He’s mostly a dope and always 2 steps behind. He plays that kind of character well. When he plays a boss or a super-hero he is totally miscast in my opinion. Rosamund Pike continues to impress me with not only her beauty but her ability to play both a strong woman as well as damsel in distress. Kudos to newcomer, Carrie Coon who plays Affleck’s plucky twin sister.

Fincher continues to impress me with his productions involving shady yet smart characters and the seedy underbelly of seemingly normal and boring life. His thrillers and mysteries always look great and paced perfectly. Without going into spoilers, there was like 3 twists in this film and even after 2 hours I was hungry for more revelations and surprises (more on this later).

What fail(s):  However, I cannot express my disappointment with this movie without going into spoiler territory so this section will be whited-out. I will just state for the record that despite a well made movie, the story was weak and not at all satisfying enough for me. Spoilers now: The main gripe I had with this thriller was how it all unraveled in the last 1/3 of the film. To make a long story short, Pike’s plan to ruin her husband’s life goes awry and she makes a new plan to be able to return back home to him. Yes, this sounds as odd as it is. Her revenge plan itself is so off-the-wall it’s hard to fathom it—She catches Affleck cheating on her so she decides to frame him for her death, meaning she actually planned to kill herself to spite him. OK. And when she effed up her initial plan by becoming chummy with some rednecks who rob her (again, if she wanted to be low-key why is she playing mini-golf with them!?), she resorts to calling her old high school sweetheart Neil Patrick Harris and as luck would have it she is able to accuse him of rape and is able to kill him just so she can escape his lush lake house to return home to Affleck but still has the idea to make his life a living hell. This story is so convoluted that it begs the viewer to believe the motives of this girl just because she’s “crazy.” Sure she’s off-kilter but only when a boyfriend/husband starts to fall out of love with her. There is no other evidence or examples of her being crazy or so sociopathic as someone who would resort to such extremes as wrongly accusing someone of stalking, rape, kidnapping and murder. Break some possessions, key his car, maybe boil a pet rabbit in a pot but to go through such a plan that involved maiming oneself, signing a life-insurance claim, buying a load of expensive crap to hide away to make it look like the husband is broke is totally extreme. Wouldn’t it be easier and more satisfying for revenge to just kill him or castrate him or something along those lines? This whole story’s mystery(s) as good as it is woven cinematically is based on buying into such a unbelievable crazy person’s motives. Sorry, I’m not buying it.

To make matters worse, Affleck’s character stays with the crazy bitch despite the whole scheme she hatched to frame him, kill herself and then had to resort to destroying Harris just so she can lie herself back home to normalcy. I’m also not buying that he feels guilty enough, afraid enough or even tied back enough to have to stay with such a lunatic. Sure, he’s a slub and a heel but no man would stay with that life.

The other aspect that ties in with Pike’s evil scheme is how easy she gets away with it. The detective that was on the case sort of suspects that there’s something rotten in the state of Delaware but is ‘hushed’ by the Feds. And then that’s basically it. Even after Affleck tells the detective of the truth she says it’s out of her hands. I know the film is already 2 and half-hours but I’d be willing to stay with it for another half-hour if Pike is brought to true justice with deft detective work. But we never get that. The movie’s primary goal (I think) is to show how marriage is sometimes awful. It could all be summed up in this exchange at the final by Pike and Affleck:

Affleck: You’re delusional. I mean, you’re insane, why would you even want this? Yes, I loved you and then all we did was resent each other, try to control each other. We caused each other pain.

I was really into the mystery and thriller of Pike’s plot and the ups and downs of it and how the police were on the case but it fell apart so badly for me that I ended up so disappointed in this weak-ass revelation and resolution.

Overall: Fincher is hands-down one of my favorite directors and his style is spectacular. I don’t blame him at all for the faults in this film. Much like I didn’t blame him for The Girl With The Dragon Tattoo‘s faults. Both films are impressively made and look fantastic, however, both thrillers have terrible endings I’m afraid. But that’s the stories he’s adapting. I’m sure both were true to the original source material and I’m sure I would be disappointed in both books if I read them. I’m sorry Gone Girl fans but I found it to be one weak thriller/mystery. Feel free to bash me in the comments section.