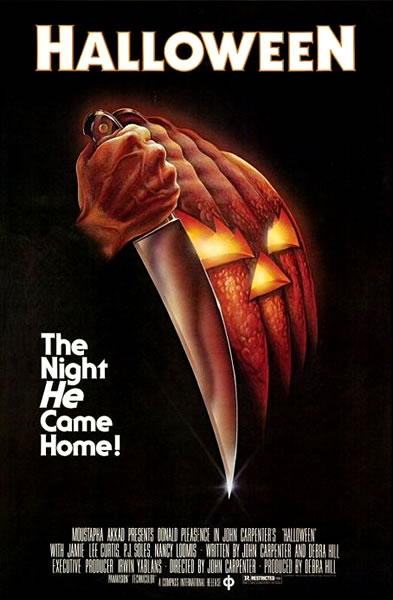 What’s It About: After the most simple and effective opening credits ever done, a title card tells us we are in Haddonfield, Illinois on Halloween night in the year of our Lord 1963. Through what has to be one of the longest POV shots ever committed to cinema, we see someone stalking a really dopey couple attempting to look like they’re making out in a living room. The POV checks the surroundings, makes its way into the kitchen, and plucks a butcher knife out of a drawer. The male half of the couple is then watched through these eyes bailing after record-breaking time it takes to achieve an orgasm. [Author’s note: Apparently the actor playing the boyfriend grew up to be a priest and somewhat poo-poo’d this film. Sometimes the jokes write themselves folks.] Anyways, the POV then ascends the stairs where we see the girlfriend combing her hair in typical post-coital fashion. Now tons of jokes have been made on what happens next, and the scene has been ripped apart more than anything Abraham Zapruder ever filmed – so I’ll just say that the POV then hacks the girl to death with said butcher knife while looking at the arm that’s doing the nasty deed. Suffice to say the girl dies and the POV high tails it out of Dodge while breathing like someone who is looking at their first issue of Penthouse. The POV makes it all the way to the sidewalk in front of the house, then an couple pulls up, yanks off the mask our killer POV was wearing and asks, “Michael?”

All righty we are now in Smith’s Grove, Illinois on October 30th 1978. Dr. Sam Loomis and a nurse with the highest cheekbones ever constructed are making their way towards the sanitarium where our POV now resides. To clear things up, and to alleviate myself from ever writing POV again; they are on their way to transfer Michael Audrey Myers (the killer of the unfortunate dopes from the beginning of the movie) to a maximum-security ward in Harden County. Worst middle name for a killer ever. When they arrive they see a bunch of inmates, dressed only in bed sheets, roaming around the grounds like Romero zombies. Loomis gets to a phone to find out WTF, and then the car is attacked by one of the sheet dressed wack-a-loons. He grabs the nurse by the hair, breaks through the window of the car with a horrendously obvious wrench taped to his hand – and then completing his carjacking, drives off into the rainy Illinois night. The nurse is left crying in the mud and Loomis comforts her by shouting, “The evil is gone!”

Bang Bang Michael’s silver wrench came down upon her head.

It is the next day. Halloween 1978. We meet Laurie Strode on her way to school trampling over more painted leaves from a craft store, and her father tells her to not forget to drop off they key to the Myers’ house. Apparently this shylock realtor is trying to pawn off a house that held a murder. Didn’t he see The Amityville Horror? Wait, that came out in 1979. Never mind. Laurie then meets up with Tommy, her babysitting assignment who warns her not to go to the Myers’ house for there be monsters. With a trademark Carpenter “zinger” and an OTS shot, we see Michael watching Laurie as she drops off the key. No harm no foul. Mikey then follows her to school in the hijacked station wagon he copped from the high-cheek boned nurse. It creeps her out a bit, and in a bit of ironic foreshadowing she still manages to answer a question about Samuels and fate. After school Laurie walks home with Linda and Annie while Michael rolls up on them in his dope ride. It creeps out Laurie again, yet it makes Annie pissed off and Linda wet. Thus completely characterizing all three protagonists of the film.

I’m looking at you. You wore green so you could hide…

Later that night, Laurie is off to her babysitting gig hitching a ride with Annie who has similar duties directly across the street. This sets up a nice package for a holiday based serial killer yes? Loomis finally arrives in town and seems to be perpetually one step behind Michael. After raiding a True Value for supplies, Michael then begins his intense stalking of our girls. After our girls get settled, we’re treated to Loomis giving the Sheriff of Haddonfield the complete backstory of our antagonist. Apparently he is a dog eating, unstoppable, pure incarnate of evil, with the blackest eyes – like a doll’s eyes. He’s so dangerous that he made even his own Doctor carry a gat. Which makes me wonder to this day if my therapist is strapped whenever I talk to him. Loomis decides to hang out in Michael’s run down shotgun shack and wait for him while the Sheriff keeps his eyes open and his men’s mouths shut.

Now we kick into overdrive. Through some genuinely suspenseful scenes, we see Annie, Linda’s boyfriend Bob, and then Linda herself all take dirt naps. Thus setting up our heroine Laurie for the final confrontation. Michael sets up some pretty cool sh*t to trap Laurie I have to say. All of her friends sprawled out in one bedroom, a gravestone, a lighted jack-o-lantern, and a rake in front of the one door Laurie tries to get out of. He chases her back to the one house she should have stayed in to begin with for the final battle. Michael survives a knitting needle in the neck, a clothes hanger to the eye, and his own butcher knife in the stomach to eventually do a sit-up I could probably not muster if it meant the firing squad to come at Laurie one last time. Since conventional hardware seemed useless to this point, he goes for a good old-fashioned choking. Laurie manages to rip of his mask in the struggle treating us to seeing Erin Moran’s brother with a Popeye eye. Loomis comes in with impeccable timing, empties six shots into him and Michael does a Louganis off of the top floor porch. Laurie asks Loomis, “That was the Boogeyman?” To which Loomis replies, “As a matter of fact, it was.” And of course when Loomis goes to check on Michael’s body on the lawn, Michael has already disappeared. Setting up two really good sequels, one that had nothing to do with established mythos, and the rest that were so bad that you would think they were written by George Lucas. Hiyo!

Is It Actually Scary: Yeah. Unless you watch it muted without the incredible score and “zingers” that Carpenter added. Then it’s just a guy in a painted Shatner mask walking around a small mid-western town causing a big to-do.

Scariest Moment: Too many to mention, but personally I’d pick the scene where Laurie is trying to get into the Doyle house with Michael hot on her heels. For years whenever I’d walk home from my friend’s house after dark I’d always think of Michael walking right behind me, his knife poised and breathing like the killer from “Student Bodies.” Then invariably to protect myself, I’d skip the rest of the way home while singing in a high falsetto the theme to the TV show “Alice.” Kiss my grits Michael Myers. There’s a new girl in town and she’s feeling GOOOD!

How Much Gore: Aside from a little blood on the sister in the beginning, there’s not any on screen gore. Hence making it such a darned good movie if you’ll pardon my French. If you’ve ever read the novelization of the movie in the scene where Laurie finds all her friends sprawled out on display, Annie’s guts were all over the bed next to her. If Fulci or Bava directed this sure, but Carpenter’s Halloween never needed gore to be a classic. Now that I think of it, the book was a metric f*ck ton scarier than the movie was. But the administrators of this site have instructed me to stick to the flick, and assured me that my payment for this review, would be based, on how many commas, I used.

Dumbest Moment: I don’t know if it’s the dumbest moment, but the most uncomfortable one was when Linda’s boyfriend maps out their plans to f*ck by saying they will rip off Lindsey’s clothes as well as their own. Yeah, the nine-year-old Lindsey that Annie was babysitting. The only creepier thing said in history was Chapman saying to Lennon, “Hey, can you sign this for me?” If there ever was a douche nozzle who deserved to be impaled on a pantry door with his stupid J.C. Penny cuffed jeans dangling in the breeze, it’s him. Listen, I’ve banged a few babysitters when I was a lad, but never once did I want to include their young charges into my forays. Two words for you asshole: Gary and Glitter.

Threaten Paris Hilton’s future Aunt like that will ya?

Any Nudity: Some blood covered tits on Judith Myers, and depending on what transfer you own of the movie; a nice tit shot of P.J. Soles and her glass cutting nipples. Just as a side note, even though we only see her in panties – Annie had a really nice turd-cutter.

Right up there with Phoebe Cates getting out of the pool.

Overall: Halloween to this day is my number one favorite horror movie ever. It’s screened every October 31st in my home and shares a tradition with Silent Night Deadly Night every December 24th. The Great Pumpkin and The Grinch can get f*cked. Although I enjoyed Rob Zombie’s remake nothing can compare to the original. Loved it then and I love it now – and to borrow some DeNiro voice over from Casino: “and that’s that.”