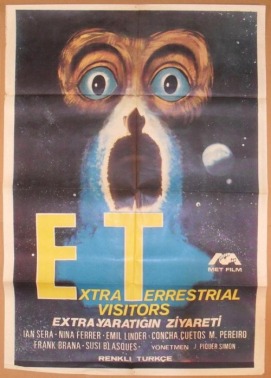 Coordinates: A young boy befriends a friendly space creature and together they learn to live and love and then the boy abandons the space creature in the woods to starve to death.

Scare Stars: I suppose if you have night terrors about a hairy dwarf with a big nose this might unnerve you.

Gore Galaxy: There’s no gore at all but the band viciously slaughters rock n’ roll.

Nudity Nebula: I think Trumpy’s nose was actually his fandangler.

Space Vacuum: Aside from the meteor at the beginning and Trumpy being Trumpy, everything takes place at your grandmother’s bankrupt BnB.

Best Transmission: “Go away Trumpy! I hate you! Go away! We’re not friends anymore! Go away!” – Tommy, saying what we’re all thinking

Best Visual: I can’t in good conscience say anything whatsoever looked remotely good in this movie.

Worst Visual: Pretty much everything. The way it’s shot, the lighting, and the quality of whatever toilet paper they used for film stock make it literally hard to watch.

Universally: Originally intended as a low-budget horror movie about an evil alien. After the success of E.T. the Extra-Terrestrial (1982), the producers made the alien into a lovable character, and added a kid who befriends it. Director Juan Piquer Simón was not satisfied with the final result. Well, that makes a lot of sense of why this movie tries to be both a lovable alien/kid story and a movie about an alien murdering musicians with no talent. Even weirder is the director’s film right before this was Pieces, which is a schlock classic. Marketed in some territories as ‘E.T. – The Second Coming.’ Well now that’s an ENTIRELY different kind of movie…

Analysis: 1 Vote for Trumpy’s Opponent (out of 10)