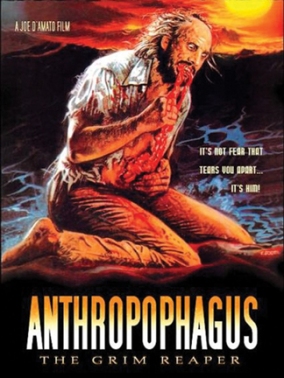 What’s It About: Some crazy asshole that eats people on a Greek island.

Even though she was 20 minutes late to the audition, nothing could sway Rita’s commitment to landing the role of Carrie.

Scare Level: This one’s a quasi-splatterfest so if gore scares you, then yeah. I haven’t been scared once over the past 50 or so movies I’ve done here. For Schlocktoberfest 2018 I’m reviewing nothing but the old Emmanuelle movies, just so I can replace every entry pertaining to horror with bush factor. Which can be kind of scary if you think about it.

Gore Level: It is sparsely used, but when it does show up, Jiminy Cricket!

Nudity Level: Barely any. A quick shot of Klaus’ wife’s breast, and that’s pretty much it.

Best Line: “I don’t see my friend’s boat anywhere.” “Well, they’re probably out in it.” – thanks a payload Sherlock.

Worst Scene: The ones that didn’t have any gore in them.

Overall: A very boring/tedious Video Nasty. If all of the gore was cut this could have been released as a travel agency promo for the Greek islands. I’m beginning to think that some of the people responsible for classifying these movies to be banned, must have fallen asleep and been told to do so when they woke up.

Score: 4 Skinned Rabbits In Lieu Of Human Fetuses (out of 10)