What’s It About: A Big Fat Greek Killing Spree. 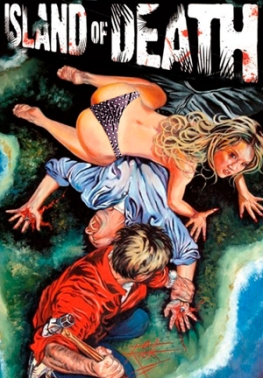 Scare Level: This is an exercise in depravity, not fear.

Gore Level: Moderate amount. Mostly blood, some brains. You can tell they wanted to go further with it but didn’t have the budget to do so.

Nudity Level: Every female lead in the movie appears naked.

Best Line: “She’s just making love to someone.” “It’s not her husband, she’s a bitch!” Christopher, you have so much to learn dear boy. She’s not a bitch… she’s cool.

Best Scene: Christopher’s abject horror in finding out that not all women find watersports humiliating.

Overall: Well, I wanted to review some of the infamous Video Nasties – and this one sure delivered. This movie wasn’t even bad for being bad’s sake. It was like the director wanted to exploit exploitation movies somehow. Blood, gore, exotic locale, and plenty of nudity; still make you feel as empty as Don Draper losing the Lucky Strike account.