Directed by: Tom McCarthy (The Station Agent, The Visitor)

Synopsis: Based on actual events of the expose of the Boston Globe’s investigative reporting team in 2002 about the cover-up and scandal of the multitude of Catholic priests abusing young parishioners.

What work(s): This movie is already on a lot of the year’s best lists and for good reason. Not only is the story compelling but the acting is incendiary. And with a cast of these fine actors, you’d expect nothing less. Michael Keaton, hot off his academy-award nominated Birdman, is continually showing his excellent acting chops and making us all wish he did more in the past decade and half that was worth watching. Kudos as well to Rachel McAdams who I was about to write-off after so many flops, especially after the abysmally panned second season of True Detective. But my favorite character in the film was played by Brian d’Arcy James, whom I never seen in anything before. His character was the one I most identified and connected with because out of all the other reporters he seemed the most fazed and creeped out by the scandal. After a revelation that one of the accused priests live around the block from him, he got so concerned for his family’s safety he posts warnings on the fridge for them to avoid the house. Getting back to McAdams, she too was easy to identify with since she pretty much gave up being a church-attending Catholic while the investigation was happening. I also have to give praise to Stanley Tucci’s attorney character who has handled a lot of the victims’ cases of the matter.

I would like to shower this film with more praise regarding the direction, writing, and the score, which were all done nicely, however, with a film like this—a dramatic retelling of an investigating reporting team uncovering such a huge story—the film is kinda dry from the get-go. I remember the story back in 2002 and because I was an already lapsed Catholic at the time as well as hearing so many pedophile priest stories, it didn’t much faze me at the time and I didn’t read into the scandal much further. However, watching this film made me even more disgusted, angry and bewildered at the scope of the scandal and the evils of such people in role model and teaching positions who are supposed to not only be uber-pious and holy but are supposed to help people and not harm them. So the story is the real driving force of interest for the audience.

What fail(s): Like I said, the movie is a little dry. If I were to compare to how iconic and important an investigative movie it is to All The President’s Men, this movie is not nearly as great in my opinion. There were scenes where Mark Ruffalo is getting emotional, expressing his passion and anger and they fell totally flat for me. I even remarked that the writing is no “Aaron Sorkin.” Wish it was because a massive scandal like this deserves some better dialogue.

There were a few plot points that I was extremely interested in that also fizzled into a whimper instead of a great moment. There was one scene where Rachel McAdams goes to an ex-priest’s house to question him about abusing boys and he matter-of-factly admits to her that he did sexually abuse young boys but “got no enjoyment” from it. He was about to go into more detail and explain what he meant when his sister shooed McAdams away. It was implied that some priests are so fucked in the head that this is the norm for them to want to touch boys regardless if they get any pleasure from it. In an uncredited voice over role, Richard Jenkins, plays an ex-priest who is also a psychotherapist assisting the Spotlight team over a few phone calls, who has been studying and analyzing priests for a long time who came to a lot of heartbreaking conclusions to the priesthood about their pedophile tendencies. I understand that with a huge story like this with a lot of disturbing facts that a lot of the details can’t be explored further but little scenes like that were very compelling to watch. Another sub-plot that ended up bothering me was that the film attempted to be a mystery-thriller with someone at the Globe was sent a lot of exposing information regarding these priests over a decade earlier and it was largely ignored and never really followed up on. Not to get too spoilery, but for most of the film it’s a “whodunit” regarding the person who received the intel and poo-pooed it and when it’s revealed who, it’s a major let-down because it was mostly for  “aw shucks, my bad” unreason why. I was expecting more from such an interesting plot point like the reporter was in cahoots with the Cardinal, or he/she, too was abused and was shamed into not following up or something along those lines but it was basically a “sorry guys, I screw up” moment. 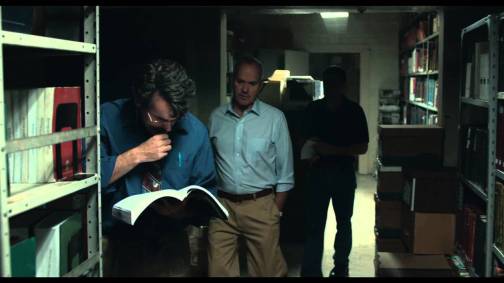 Overall: I’m sure this film will be all over the Oscars and the other awards this season and I’m perfectly fine with it. I’ve seen way worse Oscar-bait docudrama movies and this one at least has a strong and important social story that should be more aware to common people. I highly recommend it despite the dialogue not being extraordinary or too memorable but the story is captivating enough to make you interested. I don’t want to say that it’s an uplifting movie because deep down to its core this is a serious and disturbing subject matter and quite frankly it’s sometimes hard to comprehend how such serious a heinous acts and crimes happened and was covered up by so many people. As enthralling the story is how the Spotlight team uncovered the facts and brought down high-ranking officials to justice, this is a hard movie to watch.