Synopsis: Biographical account of three African-American women and their trials and tribulations while working at NASA during the 1960s space-race.

What works: The performances are all great and it’s a very compelling and poignant movie about a very little-known slice of American history. This story takes place before the pivotal Civil Rights Movement where the country (mostly southern half) still segregated blacks and whites. I’m ashamed to admit that when I first saw the trailer for Hidden Figures, I thought this was a vastly altered account of the history of NASA and couldn’t believe that they even allowed African Americans, women especially, have such a crucial role in the beginning of space exploration. I’m glad they did obviously but I had a much more darker and cynical outlook of how it may have all went down. I’m glad and thank the film for teaching me something new and important. The racial overtone is, of course, an important sub-plot to the film however…

What fails: …Let me be clear though, I really don’t have anything to nitpick or call foul on with this movie. In fact, I loved it. Out of all the Oscar-nominated movies I watched for this year thus far, it was the one that made me the happiest. But it’s very, well, “old school” filmmaking. Which is fine! Don’t get me wrong. It was wasn’t boring but just sort of a notch above mediocre. Sure, it’s a great and important film but it feels old in its storytelling and embellishments of the historical accounts. It just feels like a cookie-cutter of a biographical movie. The King’s Speech, Spotlight, The Theory of Everything, Argo—these are all fine and interesting biographical movies but fail to make any monumental impact in the filmmaking medium though and that’s what I mean. A few months ago, I watched Trumbo and loved it because I not only learned something new because I basically knew nothing about  Dalton Trumbo but also it inspired me because of the hot-button political aspect of the movie. That and Bryan Cranston was phenomenal as usual. I’m sure the movie has a ton of historical inaccuracies but that’s besides the point. Which brings me to further emphasize my point here and that Hidden Figures probably could’ve been better with more artistic license.

I really went into this movie thinking it was going to be floor to ceiling with racial overtones and how these women had to fight hard, tooth and nail to get not just respect but recognition. I also thought there would be way more discrimination and well, hate, toward them. While there was plenty of racial strife, I thought there would be more. In the trailer, there’s a scene of Kevin Costner beating down the “Coloreds Only” sign for a bathroom. Great scene but it’s basically in the first third of the movie. After that, Taraji Henson, who played Katherine Johnson, was given a lot more respect and from that point on, her sub-plot was concerning mainly of the courtship of Mahersala Ali and getting those rockets up to space. The trailer also made Jim Parsons seem like a bigot being her chief rival, but it turns out he wasn’t a racist at all but was just jealous of her nerd skills. Costner was never racially motivated as her director either. The only one who was racially motivated was Kirsten Dunst and it was mostly based on “that’s just how it is” kind of way and not a hateful way. The film treated her character in a sort of wishy-washy way if you ask me. The film had no villains in that racial regard. I’m not sure it needed a villain per se, but the women all overcame their obstacles rather quick and not that much drama for my tastes. One scene had Octavia Spencer being told to leave a library because the section of computer books was in the “White’s Only” section. Moments later we see her escorted out in a huff but managed to “steal” the book she needed anyway. The very first scene is also shown in the trailer with them broken down on the side of a Texan road and getting help from the white state trooper. I have no idea how historically accurate that scene is but, and again, this could be my cynical point of view of history, but I had a hard time swallowing the courtesy that cop showed three African-American women on a side of a Texan road who claimed to be NASA employees. He didn’t even question their credentials. I’m not saying he had to berate them with every bigoted cliche in the book but if you’re telling a story (especially in these trying times) about racial hardships, don’t be afraid to make us uncomfortable to get your point across. The film was just very easy-going and light on the racial plight.

I should backtrack a bit and say that there was a great emotional scene from Henson (how was Octavia Spencer just nominated for this?) where she goes off on her co-workers about her being treated differently than them and having to use a different coffee pot. That scene was a highlight and while I wish there was more, I guess the film felt it didn’t need to pound us over the head with these sort of scenes, especially since this film focuses on three separate African-American women all going through the same racist as well as sexist ordeals. And again, please forgive me if I’m speaking too glib on the subject matter but to put my stance in perspective here, when I was growing up, the movies that I watched about racism were movies like Mississippi Burning, Do the Right Thing, A Time to Kill, Malcolm X and American History X. All films that are not easy to watch for all the right reasons. 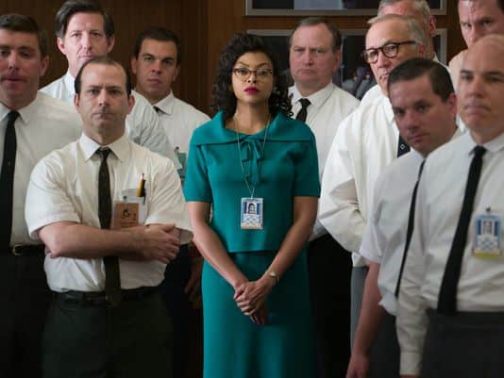 Overall: Like I said, this is a great movie and very easy to watch and enjoy. You don’t have to be a fan of history or of space exploration to enjoy this delightfully made picture. It’s an important story to see, not just for women, or women of color for that matter but for all of us, to realize how hard work, ingenuity as well as perseverance pays off. It’s surely great that it’s nominated but I hardly see it winning the Oscar though. But don’t let that discourage anyone from seeing it.