What work(s): The film is a (laser) blast. It totally is a gag and homage to cheesy 80s action/sci-fi flicks like Mad Max, Spacehunter and Laser Blast. Michael Ironside hams up the screen like a Carolina pig roast on Super Bowl Sunday and looks like he and everyone else has a lot a fun making this. We had fun watching this too although it could’ve been schlockier (more on that below). It never takes itself seriously which is great for the sub-par special effects and chase scenes which is all done on BMX bicycles. There’s Ironside’s main lieutenant, named Skeletron,  who wears a funny looking metal skull mask with a circular saw arm. There’s also a gratuitous amount of silly gore that would make a young Peter Jackson jealous. The soundtrack is glorious and just as cheesy and gets the tone and feel for the era right. The opening song is right from the BMX sports drama RAD, “Thunder In Your Heart” and it fits perfectly. If you’re a fan of silly and corny sci-fi spoofs than this is your bag baby.

What fail(s): I wouldn’t say much to nitpick with this little picture. I, do however, feel that it left me wanting much more and wished it was more schlocky and cheesy than it was. It didn’t take itself too seriously but there were times when it could’ve went over the edge more, especially for laughs. It was a little too middle-of-the-road when it came to the story and characters. It was a simple story enough and the characters were fine but other than Ironside’s Zeus character and the girl side-kick to Turbo Kid, Apple, no one was really that memorable enough. It lacked a great deal in the action and humor departments for me unfortunately but I would still highly recommend it. Just wish it was hokier and failed more to make it a great schlock cinema masterpiece. But making an intentional bad movie is no easy feat. However, I commend the filmmakers in getting the tone down and for getting the look right.

Overall: Brian and I downed a few brewskis and sat and watched what we were hoping was to be a great homage to sci-fi schlock and while we both admired the picture and what they were trying to do we sadly were both a little let-down. We can easily name more genuine and more entertaining schlock features that we would rather watch again over Turbo Kid. But hey, who knows, maybe in time this movie might deserve a second viewing. I’d also like to point out that there is a short called “T For Turbo” that the same filmmakers made before that inspired the feature and I actually liked the 5 minute short more. 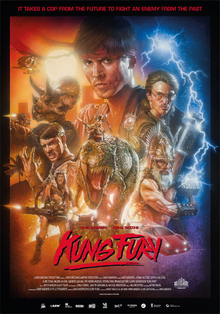 Synopsis: All spoof and homage to 80s cop and martial arts action flicks, this 30 minute short is a hilarious story of one cop skilled in karate who, with the help of a hacker named aptly, Hackerman, goes back in time with some scantily-clad valkyries, the Norse god Thor, a half-man/half dinosaur cop named aptly, Triceracop to battle Adolf Hitler and his Third Reich—all with martial arts, and like Turbo Kid, silly use of gore and special effects.

What Works: Like Turbo Kid, this is an homage/spoof take of the old 80s martial arts flicks but with way over the top use of humor. Wherein Turbo Kid was somewhat restrained with physics and plausibility with its use of effects and story, Kung Fury don’t give a rats ass about anything. It’s a complete spoof and is all played for laughs. Turbo Kid had some drama and heart in its core with Turbo Kid and Apple’s budding friendship but here in Kung Fury, it’s full on Zucker Brother lampooning.

What Fails: It’s hard to nitpick a spoof comedy action flick that’s a scant 30 minutes long but there were some scenes that fell flat for me but I can’t even remember what they were to complain now.

Overall: I’m liking that decent spoofs and parody’s are making a comeback. It’s been a long time since those Zucker Brothers and Mel Brook’s films made us chuckle. I know there’s been those lousy Wayan Brothers and the talentless fucks involved with every Not Another [blank] Movie shitshows but we need intelligent and well-made parody comedies. There’s something about spoofs that are very different from conventional comedies. It’s not just the subject matter or tones that they skew but the whole filmmaking process. They break fourth walls, they do things that are maybe hidden in the background and they make serious characters do sophomoric and low-brow humor gags. Strangely enough both Turbo Kid and Kung Fury are made by non-Americans so maybe we just suck at this genre of filmmaking now. At any rate, I hope this ushers in a whole new generation of spoof filmmakers. The whole film is readily accessible on YouTube and it’s even now on Netflix so I would recommend it since it’s so short and easy to watch.

Score: 8 “Personal Transportable Cellular Telephones with 645 Channel Capacity” (out of 10)