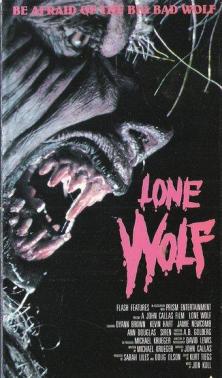 What’s It About: The archetypical renegade Texas Ranger, J.J. McQuade, wages war against a drug kingpin with automatic weapons, his wits and martial arts after a gun battle leaves his partner dead. All of this inevitably culminates a martial arts showdown between the drug lord and the ranger, and involving the woman they both love. DAMMIT! I accidentally watched Lone Wolf McQuade!

I’ll call you on the phone, ’cause I’m all alone, I’m a wolf that’s lone, throw this bad dog a bone…

Spirit of Halloween isn’t exactly open for business in late November/early December is it?

Scare Volume: I’m sleepy and I want to just go to bed.

Gore Volume: Credit where credit is due and this little werewolf flick did give us some nice gore effects. Here’s the best bit:

Nudity Volume: This film may be rated R but it’s not for the skin.

Worst Scene: While the movie isn’t a total stinker it definitely needs a lot of work, especially in acting department. The kids really can’t emote themselves out of a paper bag. I can’t really pick one scene without having to watch this film again and I won’t (would rather watch Chuck Norris in Lone Wolf McQuade again) but I’d go with the finale with them simply just shooting the wolf and revealing that it was the computer teacher. I know there’s not much new that can be brought to the werewolf table but it was as simple as scare, point, click, shoot, transform, die.

How ’bout the Tunes: For late 80s cheese metal it wasn’t that pain-inducing. Actually the tunes were very tolerable.

Band Rating: I don’t recall the name of the group, if they even gave them a name but they were your typical 80s wannabe hair metal band. Like Kix, Sheriff and Firehouse they would be just about Lick My Love Pump.

Overall: Coming down to the final few flicks of this month and either I’m getting soft or going insane with these flicks because I can’t say too much good or bad about this one. Don’t get me wrong—it’s garbage and belongs in the relative obscurity for the end of time. I’m probably also getting lazy at this point. But can you blame me? The filmmakers are lazy as well or just inept at their craft. Did I hate this flick? Not really. I’ve seen way way worse this month. Would I recommend this? Not really, unless you love werewolves, shitty hard rock bar bands or computer programming. This was a total middle-of-the-road horror movie with some so-bad-its-good moments.