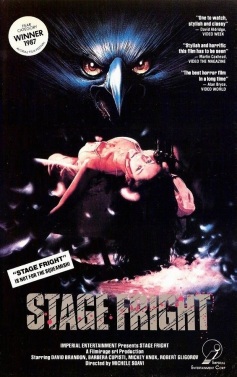 What’s It About: A deranged killer dons a huge owl mask and kills a bunch of stage performers, as owls are wont to do.

Is It Actually Scary: It’s a slasher, so expect your typical slasher jump scares and creepy feelings.

How Much Gore: Pretty much every kill is a total splatterfest, the way it should be.

Best Scene: There’s nothing quite like a good drill kill.

Worst Scene: I’d say the female lead, Alicia, seeking treatment for her ankle sprain at the insane asylum (the only place around to get medical treatment; where is this theater located, in the middle of a swamp?). I understand that she wanted to go get treatment as quickly as possible so the megalomaniacal director wouldn’t notice her absence, but come on. If leaving for a few minutes is such a big deal and will cause you to get fired, suck it up and ice that shit down. It doesn’t seem to bother her all that much when she’s running from the killer later. But if she didn’t go to the asylum the killer wouldn’t have escaped and followed her back to the theater and the movie would just be 90 minutes of watching people rehearse The Night Owl.

Any Nudity: Barely any baring, which I was very surprised by.

Overall: Very enjoyable, underrated slasher flick with a lot of style. The director, Michele Soavi, did second unit work on Tenebre, and you do see Argento’s influence here. The movie’s original title was Deliria, which definitely sounds like an Argento film. It’s also known as Stage Fright: Aquarius, which just confuses me and Dario Argento both. And apparently it’s also known as Bloody Bird and Sound Stage Massacre. I think we can all agree that Stage Fright is the best name out of all those. Although Bloody Bird is a very close second, but that isn’t widely used because it’s also the title of an extremely popular menstruation porn. Regardless, this is a fun movie with a lot of style and gore, and if you’re a slasher fan and haven’t seen it, there’s no reason you shouldn’t like it.

It’s funny, just like The Town That Dreaded Sundown, they just remade this movie too and I hadn’t heard a peep about it, even though it stars Meat Loaf. Horror movie remakes are the equivalent of puppy mills these days.