What’s It About: Everyone’s favorite foul-mouthed, red-head Good Guy killer is back and still looking for Andy to make him human again. THIS TIME, Andy happens to be at a military school. That’s the only difference. 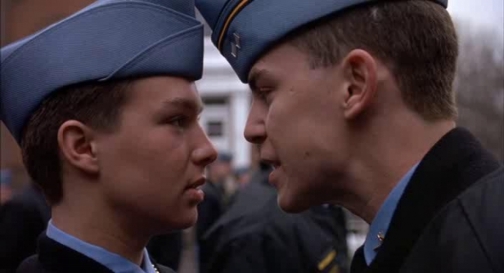 There’s only two things that come out of a Child’s Play sequel, son and that’s jeers and sneers!

Is It Actually Scary: The downtrend of scares, originality and overall good filmmaking continue with this sequel.

How Much Gore: I would’ve been happy if the grenade death was more graphic but I suppose since it was a kid they had to tone it down. Regardless, this installment lacked the goods anyway.

Loved you in Hellraiser!

Best Scene: I actually rewound the film to watch Chucky’s face get sliced like a salami at the corner deli, so I guess that scene is worth checking out. The whole finale is OK by these Child Play’s standards anyway.

Worst Scene: Really any scene with Tyler in it. Or De Silva. Or Shelton. In all honesty though the opening scene where Chucky’s blood is spilled in the melted wax at the abandoned factory. His blood shouldn’t be in liquid state and the wax should be hard as a rock from what we’re told how far in the future this film takes place, which is about 8 years.

Any Nudity: This franchise is totally devoid of any and all sex appeal.

I don’t know but I’ve been told.
These sequels’ schtick is getting old.

Overall: Having a slasher film set in a military academy is a novel idea. However, it wasn’t a great movie. I’m struggling with the idea of a slasher movie set in a place with rifles everywhere. On the one hand the killer is at a great disadvantage when practically every victim is armed and trained well. And on the other hand isn’t having a tired franchise set in such a setting with a disadvantage for the killer a good thing? Like how they had Jason’s final girl be a telekinetic in The New Blood? Jason got his ass kicked and it made it way more interesting. But like Friday the 13th Part VII, Child’s Play 3 sucks. The idea was different but the execution of said idea is boring and botched and lacks anything really new to Chucky’s storyline. I stopped my Child’s Play reviews here this year and I’m really not sure if I want to watch and review the other THREE installments of the Chucky series. Just by their premises’ alone I can’t believe they were even made. The next one he gets a wife/female partner and the one after that they have a baby. I totally get not taking the franchise seriously but there’s a real fine line between stupid and clever as Nigel Tufnel famously said.