Hello my friends! I know it’s been a long while since I answered any juicy cinematic inquiries but I was away on a very long sabbatical to Thor’s Well, Oregon. I was searching for my cheating wife, who ran off with our pool boy, and I actually found her alone in a cave starving. The pool boy was nowhere to be found and left her broken and bruised. Seeing my wife in such despair, I simply laughed in her face and left her there. Anyhow, Thor’s Well that ends well I always say.
But it seems that every Holiday season I get a few questions regarding Gremlins it seems. That movie does tend to make people scratch their heads. I say let your suspension of disbelief go and just enjoy the great horror/comedy/action-adventure be.
Unless of course you’re frustrated at that particular scene that grinds the movie to a screeching halt. You know the scene. 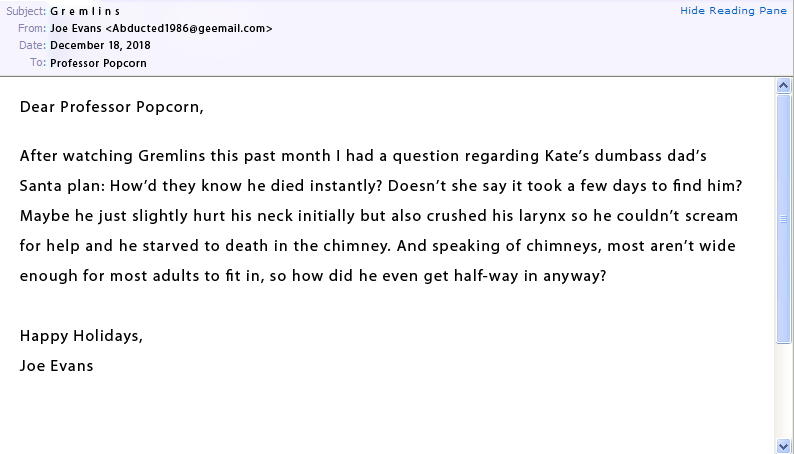 Yes, the scene is criminally bad and makes you want to claw your eyes out. It’s a super depressing scene—and unnecessary one to boot since Kate’s dad has to be one of the most moronic characters ever in film.

However, what most viewers and fans of Gremlins don’t know is that there was an excised scene from the script that fleshed out more to this morose and pathetic end to Kate’s dad. See, it was never his intention to go down the chimney. No, he was just going to dress like Santa with his sack of toys and gifts and was going to enter the house like a normal sane human being. But in a bizarre, Tales From the Cryptian fashion, Kate’s dad was murdered! And here’s where it gets interesting. Kate’s dad was having an affair with Billy Peltzer’s mom! And of course Billy’s inventor father, Rand Peltzer found out a few weeks prior to that particular Christmas. Rand, in a blind rage at this infidelity, made an invention just for Kate’s dad called “The Bump-Em-Off Buddy™️” and enacted his revenge against the dirty philanderer as he was walking to his house dressed like Santa. Using the opportunity of the Santa outfit he then broke Kate’s dad neck and stuffed him in his own chimney to make it look like an accident. And the family and police were none-the-wiser and still think he was trying to act like St. Nick and broke his neck climbing in a chimney. Billy’s mom now knows not to fuck with Rand Peltzer!