What’s It About: A laundry-folding machine has been possessed by a demon, causing it to develop homicidal tendencies. It seems Death Bed has some schlock competition! 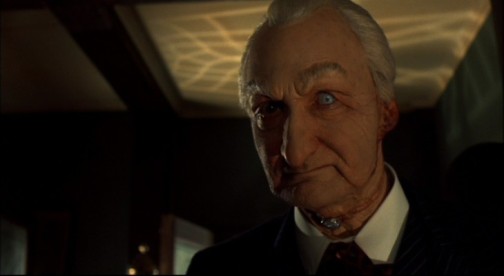 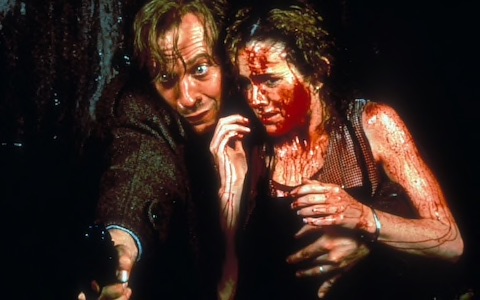 Scare Level: I think this should be the last year we use the “Scare Level.” Because obviously we don’t watch scary movies ever. What’s scary is this film spawned 2 sequels.

Gore Level: The first female victim’s death was fine. But the end where the hippy friend gets torn in half was the gore highlight. But that’s to saying much.

Nudity Level: I honestly don’t remember. But I’m betting none.

Not in The Mangler

Best Line: “Excuse me, Miss Oulette, I’m uh, investigating a laundry folding machine with a bad case of demon possession, and I need to examine you to determine whether or not you’re a virgin!”

Best Scene: Even though the whole laundry folding machine turning into a monster at the end is completely fuckinf asinine, it tearing the friend in half was the only highlight of this miserable experience.

Worst Scene: I’m not rehashing this poor excuse for a flick anymore than I have to. So dealer’s choice.

Overall: Why is there a horror sub-genre about possessed inanimate objects? It has to be the worst idea in the history of man-kind. Seriously, it’s really fucking stupid. Death Bed still takes the cake for worst one (that I’ve seen anyway) but this one is a close second. And The Mangler has 2 if you count the old ice-box. I can maybe, MAYBE, see some inanimate objects as having some ominous personalities, but when it’s creeping or attacking adults, that’s where I draw the line. Do you remember the scenes where Macaulay Culkin was creeped out by the old furnace in Home Alone? Yeah, that makes sense and actually is scarier than anything in The Mangler. Look, I get that King is a great influential writer but not all his ideas could be home runs. Just because he writes a story or 2 a year doesn’t mean they have to be published, much less adapted into a stinkin’ film. This is partially why I’m not a huge fan of his. Sure it’s impressive to write this profusely, but like Woody Allen who makes an average of one film a year, take a break from time to time. I’m not sure if I would even recommend The Mangler to any ardent Kind fans out there.

A way much better movie

For our other Stephen King movie reviews, check out:

Children of the Corn

Tales From the Darkside