IT’S SUMMER! (in movie release terms anyway) Are you as excited as we are?! There’s at least half of a half a dozen flicks we can’t wait to pay for and be mildly entertained by. Our lives will never be the same.

(We usually link the trailers but I don’t give a hot shit to bother. Plus, you’re all tech-savvy, you can find the trailers if you really have to—you don’t us to hold your hands anymore)

(May 5) Guardians of the Galaxy, Volume 2

This is probably the only flick we’re both excited to see. I’m not sure if it’s great that it’s the first this whole season or a bad decision. The first one arrived in August and blew everyone’s minds and expectations. There’s good buzz so far and will probably be the best movie of the whole year.

(May 12) King Arthur: Legend of the Sword

Oh good, another 21st century update on a British myth (i.e. Robin Hood with Russell Crowe) but this time 150% more fast-paced action that no one cares to see. Seriously, I’m a huge Anglophile AND a fantasy/sword-and-sandal epic movie fan and even I’m left cold by Hollywood’s attempts at these epics (WarCraft, Ben-Hur, Exodus).

Sadly, not the sequel to Guy Ritchie’s 2000 comedy-crime movie. Sorry, I still don’t care for Amy Schumer. There’s a very slim chance this could be a decent rainy day matinee on cable that makes me chuckle a few times because of Goldie Hawn but like I said, slim chance. 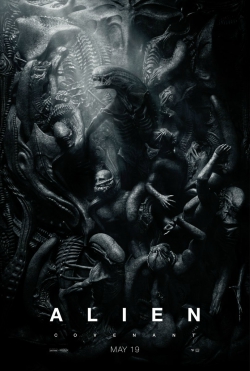 I’ve been burned before from the Alien franchise and I’ve been burned tons of times from Sir Ridley. This looks like every other Alien flick, which isn’t saying much. I’d be shocked if this one is any good.

I still can’t get over that the mom in this movie is Alicia Silverstone. I know nothing about the book series and I just learned that this is the fourth film in the series! Clearly, I’m behind in my YA book movie adaptations. Not really.

At first I thought this was a serious-toned adaptation of the beloved wank-fest 90s TV show. But it’s not. Still not sure if that’s going to work since comedy these days is a wasteland. But who am I kidding…

(May 25) Pirates of the Caribbean: Dead Men Tell No Tales

I just saw the trailer with my kids yesterday. Looks harmless. I guess if they want to see it, I won’t complain too much. But it says “The first epic movie” so does that mean there’ll be more of them?

Oh good another DC Comics superhero movie. Those never disappoint. At least they spelled the title correctly. That’s a good start. I honestly hope this movie is decent. I really do. But the odds are not even close to its favor.

Best horror title since It Follows. Take that for what it’s worth. I’ll be taking a break from horror this summer.

I was just thinking the other day that that the over saturation of “franchises” is quickly killing my love of cinema. 20–30 years ago there were like 3 movie franchises which ever if barely got to a 3rd or 4th installment (Star Wars, Indiana Jones, Superman). Now there’s 3 or 4 born every year. Universal is doing this with the Monsters starting with this boring as hell Mummy movie and will branch out to the others like Dracula (he never gets old) and Frankenstein (he’s always relevant). Hollywood just has to stop with making franchises or it will destroy the industry.

They lost me as soon as the trailer said: “From Judd Apatow producer of Bridesmaids and Trainwreck.” But seriously, this movie has a lot a bad going for it: basically a Apatow produced sappy, sentimental romantic comedy (that will probably be over 2 hrs long) but I applaud them for making a story centered around a Pakistani character and one in a mixed-racial relationship. That’s refreshing at least. I may see it, but definitely not in the theaters.

You know what? I take that back about The Big Sick, I’ll gladly go see it that weekend just to spite the fucking insipid Transformers franchise.

I’ll gladly give a theatre some dough to see an Edgar Wright movie. And if the film is half as fun as the trailer, I’d be more than happy.

How in the fuck are there still Amityville movies being made?! Can someone please enlighten me please?

Yeah whatever. If the kiddies want to see it, I’ll take them)

Oh goodie, another comedy about adults acting like irresponsible teenagers while the teenager act like the responsible ones. Those are always great. Just great.

Ummmm. What did I just watch? Either this is going to be the best “So-Bad-Its-Good” of the year or the movie that finally makes me rip out my own eyes with a rusty spoon. What a bunch of pretentious bullshit.

What fresh hell is this? I thought this was about Pattycakes (played by Miss May 1984 Patty Duffek) from the Andy Sidaris movies! Hell, here watch this instead of whatever horseshit this Patti Cake$ movie thinks it is.

So far from all the trailers and news from this, is that this looks more than half-way decent. If they get the villains right then this should be a home run. Tom Holland was fantastic in Captain America: Civil War as Spidey and hopefully this movie will wash away all the putrid shit stains from the Amazing Spider-Man franchise from our memories.

So far, so good with the first two installments of this rejuvenated franchise and hopefully this will do the same. We’re both looking forward to seeing this.

WWII drama? OK. Tom Hardy. Sure. Christopher Nolan. Yeah, alright. At least this movie should be grounded in reality. I’d very much be interested to see a Nolan movie that doesn’t have buildings bending, tiny astronauts in book shelves, bat signals made out of flame on ice and cloned magicians.

I saw this flick listed on Entertainment Weakly’s calendar of slated summer movies and was poised to poke fun at it for starring Hayden Christensen but the trailer hasn’t even come out yet despite it coming out in a couple of months. That tells me all I need to know.

(July 21) Valerian and the City of a Thousand Planets

Valium and the Shitty Movie of Thousands Empty Seats

It’s only May and I’m already sick of the summer.

I’m going to be honest here and say that I really don’t care much for Stephen King stuff. I know that 98% of the literate world does so I’m not going to pretend that this movie could be interesting or possibly entertaining. But after seeing the first trailer the only word I can say that best describes it for me is: meh.

Again, no trailer yet but it’s from the director of Hell or High Water and it stars The Scarlet Witch and Hawkeye so maybe I’ll check it out.

The synopsis from Entertainment Weakly reads: “Ryan Reynolds is the bodyguard, Samuel L. Jackson is the hitman, and Gary Oldman is the dictator who wants the assassin dead.” That’s it. And shockingly, that’s enough to pique my interest. I don’t have one clue if this is a comedy or drama action flick or if it’s a love triangle between the three leads. I’m also confused by the title and why would a hitman need a bodyguard? Oh hold on, this movie actually has a trailer, lets check it out.

Well it still doesn’t explain why the hitman needs a bodyguard but the flick looks hilarious. Could be an actual winner.