Schlock Watch: Over The Top

Hello and Welcome to our newest category: SCHLOCK WATCH! Schlocktoberfest is always a high point for Hard Ticket to Home Video so we decided that reviewing only horror flicks just isn’t enough sadomasochism and we should be covering all the genres like Sci-Fi, Action/Adventure, Post-Nuke, Kung-Fu flicks, Rape/Revenge flicks, Blaxploitation flicks, Movies about Gladiators, etc! May Crom have mercy on our souls.

Exploitation Level (Gore, Nudity, Etc.): None. I can’t even remember a lady being in this picture. And it would be awfully awesome if an arm wrestling movie had blood, like Stallone broke a few arms but alas that’s asking too much.

Best Scene: Well it is a “sports” flick. A dumb sport though so there’s not too much to rave about it. Even in a boring sports flick you’d expect the actual competition scenes to have some excitement but not so much with an arm wrestling movie. However, the scene where Lincoln forces puny Mike Hawk to arm wrestle some tough kids in an arcade is really great. I mean, how awkward and unusual is it for someone like Stallone to proposition some young kids to arm wrestle and do it for money! He’s essentially using kids to gamble and thinks his wimpy kid could take on some older kid. Then after Mike embarrasses himself and runs away Stallone pretty much tells him that he lost because he let himself get beat (and not because of actual physics) and then says he grew up too privileged and is a spoiled brat. What a great scene.

Worst Scene: But then that same scene continues and Mike works up enough courage to face the kid again and beats him twice! It’s ridiculous!!

Best Line: “I drive truck, break arms, and arm wrestle. It’s what I love to do, it’s what I do best. Being number one is everything. There is no second place. Second sucks.” ~ Bull Hurley

Well How Schlocky Is It?: I hated this movie back in 1987 or whenever I caught it on cable and it’s still a big dumb picture. Back then, I would watch anything Stallone made and I think this and Rhinestone were his biggest disappointments. This was the beginning of the end for Cannon films who made such great cheeseball schlock in the 80s especially in the action genre and within a few years they would crumble and make nothing but unwatchable crap. I was hoping that Over the Top would age like a fine wine and become a movie worth watching for the jokes and riffs but nope, not really. It’s still as bad as I remember it. I would only recommend it if you enjoy Stallone enough and could sit through such sappy melodramatic schmaltz with a lot of faces looking like they are passing a stone. If that’s what you’re looking for, then this is the picture for you! 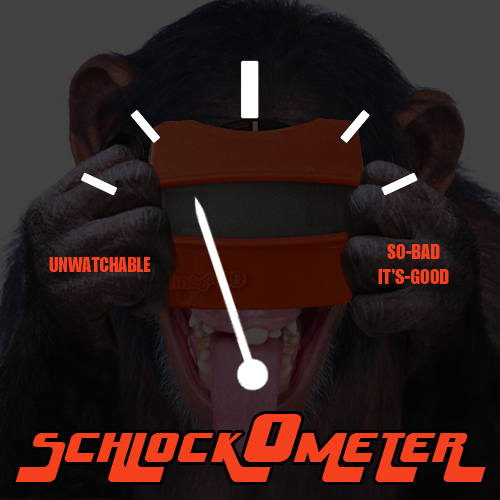