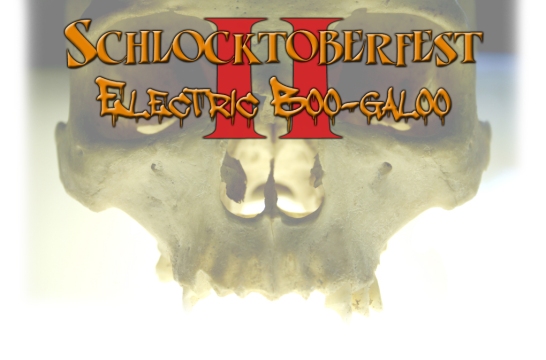 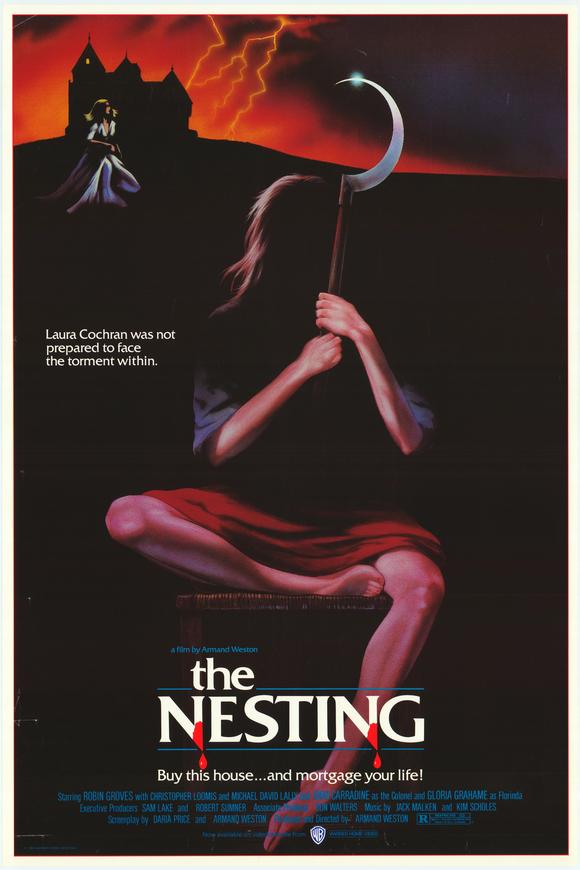 This poster messes up the main character’s name as “Laura” instead of “Lauren,” and the movie is also nothing like this.

What’s It About: Seems that we start off in the ’40s. Three guys go into a house and seemingly shoot everyone, which I guess is called a “Nesting.”

Cut to the future (1981) and we witness the horrors of agoraphobia through our heroine, Lauren. Agoraphobia is not only an irritating condition, but also a convenient plot device that gives a flimsy excuse for why she can’t just leave the haunted house later on.

Lauren and her guy Mark drive out to the woods on a house hunt so she can find a peaceful place to keep her agoraphobia in check and write her latest novel. She stumbles across a house just like one she described in one of her books. It’s the house from the opening massacre, of course. You bet your ass it’s haunted. 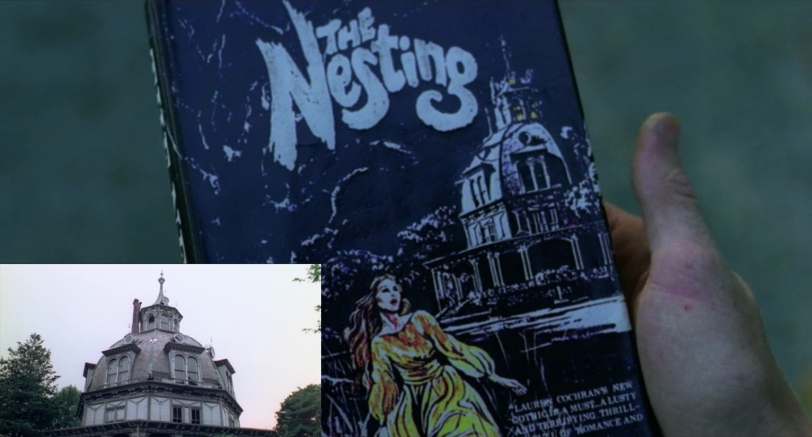 Lauren and Mark just walk right in, because of course, and see some weird stuff like a lit cigarette THAT SHOULDN’T BE! Mark is f-ing annoying.

Lauren wants to rent the place because she’s a dope. They locate the owner’s grandson, Daniel, and he takes them to his grandfather, who turns out to be The Colonel, who is 114 years old and seems to uneasily recognize Lauren. He begrudgingly agrees to rent the place to Lauren and her damn woman’s ways. She moves in 6 seconds later.

That night: Lauren’s boobs! They’re not great. Flapjack style. Suddenly she finds herself transported to when the brothel was thriving. Like Dreamaniac but an actual dream. Lauren phones her therapist and tells him she thinks the house is haunted just because a window cracked and a bead curtain fell.

She goes up in the tower of the house and gets stuck on the roof just because one floorboard in the tower breaks. Her shrink comes and tries to save her. You know he’s going to fall and he does when a ghost hooker laughs at him. He came all the way up to Lauren’s house from the city just because she called him all freaked the night before, and for his trouble he gets an iron spike through the eye. 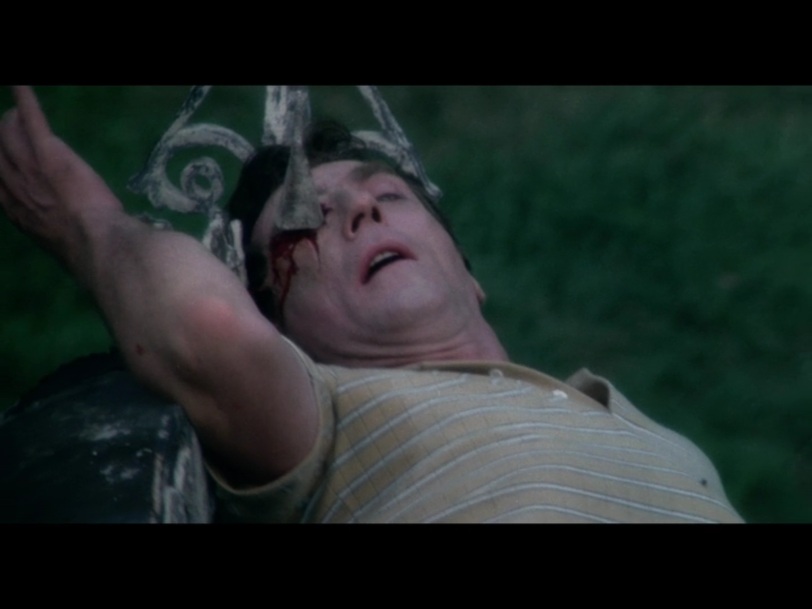 “I’m still billing you for this, Lauren.”

Why is this movie not called Ghost Hookers?

Lauren finds “web” and “ded” typed on her typewriter so she accuses Frank the caretaker of doing it, even though she’s already convinced of the ghosts. Frank tells her ass right off with, “I ain’t sayin I like your kind and I ain’t sayin I don’t, but I got better things to do than type on your writer!” You can’t argue with that. Frank drinks hard and grows his facial hair hard, so Lauren apologizes.

Frank is definitely the gem of this picture. Lauren tries to patch things up with Frank and asks him if he’d like some lunch. He takes a swig from his flask and says, “Nope, this gasoline keeps me runnin’!” Frank RULES.

As they sit down for a liquid lunch, Lauren asks Frank about the funny crap going on, but he just thinks she’s nuts. Then kind of without warning Frank basically tries to rape Lauren and the ghost hookers kick his ass invisibly. He still rules. He runs out and sees a dead ghost hooker in his truck, then runs off mumbling “I didn’t do it Abby done it!” This reminded me of Bubba in Dark Night of the Scarecrow. Frank runs into the big pond by the house (I guess he thinks ghosts can’t get you when you’re in water) and zombie hands drag him under. He still rules. 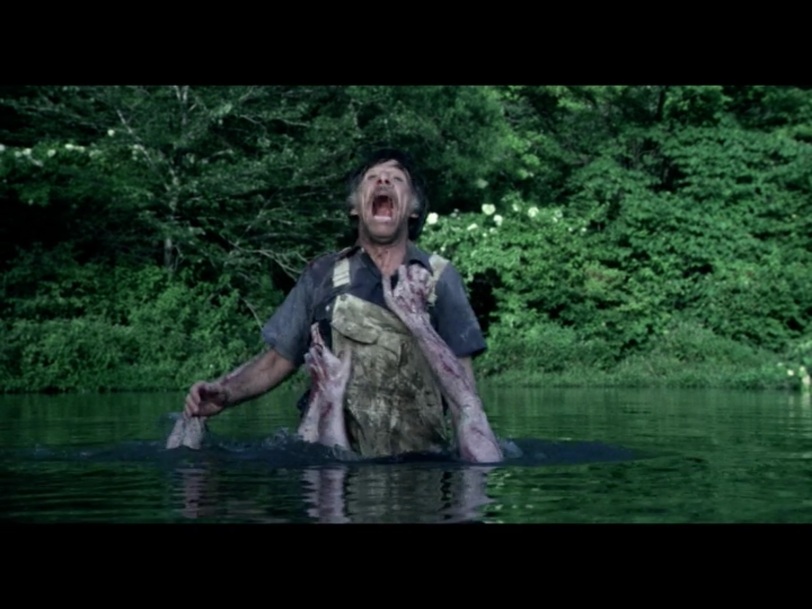 Frank’s drunk, somebody give him a hand.

Let’s check my notes: “I guess they could only afford one lightning sound effect for this movie.” “Ghosts keep grabbing Lauren. You’re not going to leave, are you Lauren?” “Wow, agoraphobia is a really cheap device to get her to stay in the house.”

Lauren finds out where this Abby lives and goes to his house to find out more. Unfortunately for Lauren, he is crazier and has bigger boobs than her. When she politely asks about the history of the house, he just gets pissed at her and tries to beat and/or rape her, like everyone else seems to want to do. He chases her in his car and runs over a couple of ghost hookers in the road.

The actor playing Abby is hammier than MC Hammer at a ham festival in the Hamptons. Ham.

Lauren runs to a random barn in the middle of nowhere and gets into a hand scythe vs. pitchfork battle with Abby and a ghost hooker shows up, so apparently they can go anywhere. Lauren uses that opportunity to put the scythe through Abby’s head. 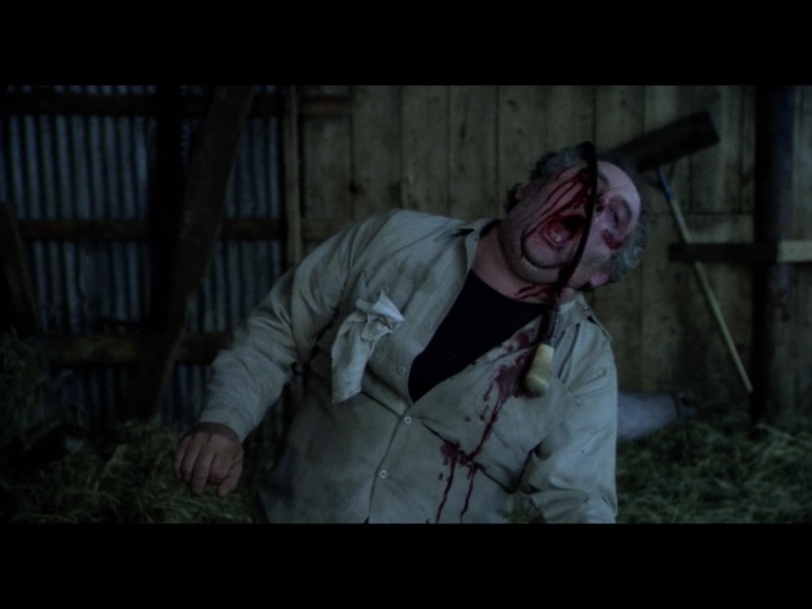 Everyone should probably stop trying to rape Lauren.

Lauren really isn’t all that upset that she just killed a guy in a horribly gruesome way. She just seems a little worried that its going to reflect badly on her.

Meanwhile, The Colonel is dying and he tells his grandson that he doesn’t trust Lauren with Frank’s wiener. Then he tells him he’s not really his grandfather but nobody cares. The Colonel then recounts the tale of his son, Leland, who fell in love with one of the hookers back in the day. The Colonel  however, states, “I COULDN’T LET HIM GO AND MARRY A WHOAAAAAHR!”

But Leland got the hooker pregnant and The Colonel got pissed and he had Leland committed and the whore had the baby girl who is obviously Lauren. Who gives a crap, really. I thought this was supposed to be a haunted house movie.

The Colonel had “three of the town’s toughest boys” go kidnap the baby: Frank, Abby and some other dude. Of course they end up killing everyone in the house, including Leland and Lauren’s hookermama. They’re the lucky ones. Of course, this scene is all in slow motion so the movie drags out even longer. These 3 minutes feel like 15. 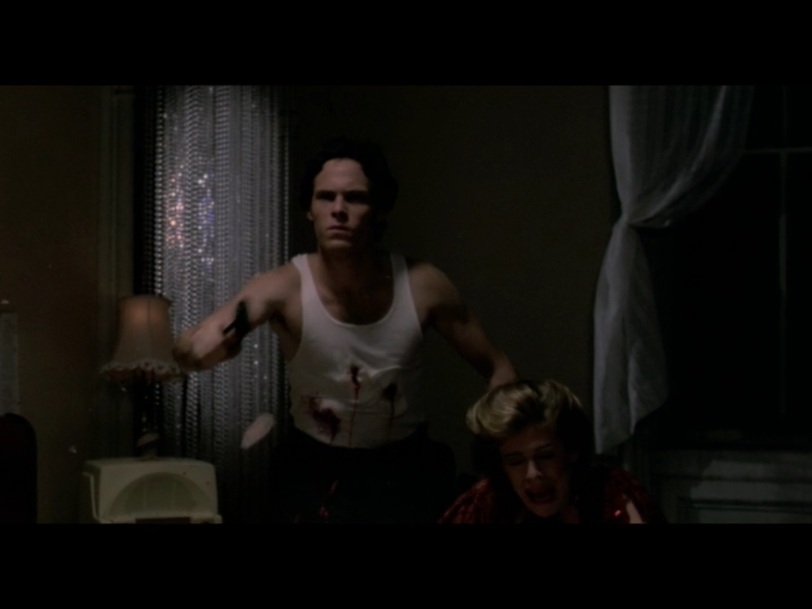 This is why you wear a condom with hookers.

The Colonel said he’d reward Frank and Abby well if they kept quiet. They were both derelict handymen. Great reward. Of course, right after he spills his guts, he dies. Not too cliche.

Meanwhile, back at La Casa de Nesting, the ghost hooker madam talks to Lauren and takes her back to the ’40s. Ghost hooker madam tells Lauren that they’re all avenged now and that she needs to shake the scene. Lauren goes into a room with a crib and it flies up and out the window for some reason. Then everything gets windy for a minute and she’s back in the present. Front door, Lauren.

Then an old truck comes through the house and bursts into flames? This makes no sense. Now Lauren is trapped by a raging inferno. I thought the ghosts wanted her to leave and be safe? 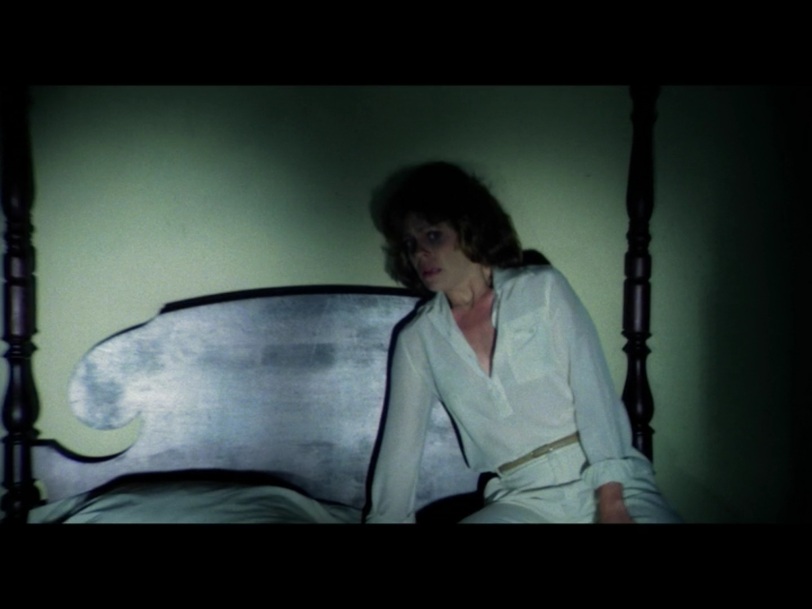 “Uhh, I just want to get my suitcase and I’ll be out of here…”

OK, I guess that was in her head. Now everything’s OK. F*ck this sh*t.

She FINALLY just leaves. Credits roll over her walking out of the house. Mark finally gets there. Wow, wonderful.

Scariest Moment: I guess when the zombie hands pull Frank under the water, but it’s unfortunate because you really want Frank to live more than anyone else in this movie.

How Much Gore: Spike in eye, scythe in head, and a lot of shotgunnin’. A little more than you’d expect from a movie like this.

Dumbest Moment: There’s a scene in the very beginning where Lauren is listening to a book on tape that’s supposed to hypnotize her and she has an out of body experience. It has nothing to do with anything else that happens in the entire movie.

Any Nudity: Lauren’s flapjacks once, and a very brief shot of another ghost hooker’s assets. Maybe some brief man butt, I don’t recall.

Overall: The Nesting was made for Lifetime before Lifetime even existed. Not the absolute worst haunted house movie I’ve ever seen, but it’s really pretty uninteresting. It’s kind of more about a woman struggling with her past than a woman being terrified of ghosts. The only real villains of the movie are Frank and Abby, and since the ghosts could apparently go wherever they wanted and actually be zombies, you’d think they would have exacted their revenge on them a long time ago. But I guess they were busy turning tricks in the afterlife, which I hope is a thing.

So what’s the title about? I suppose it means nesting as in making a house safe for a baby, like the hookers were trying to keep Lauren safe. So if you were expecting this to be about killer birds, you’ll be disappointed. Which brings me to my next review… Monday… (foreshadowing!)