The Sword and the Sorcerer

Trailer:
Brian: The Sword and the Sorcerer is found in the same moldy cardboard box in my dusty memory attic as Take This Job and Shove It. It’s a picture I vaguely remember watching all the time as a kid, likely because of a heavy HBO rotation. Which I guess some would find strange, since The Sword and the Sorcerer (from here on TSATS so I don’t have to keep typing it) is full of blood and boobs. But again, I believe my parents just turned on HBO and plopped me in front of the set so I would shut up for a while.  It’s a parenting staple that I use today.

Anyway, TSATS stars some guy who is kind of a cross between Lee Majors and Tom Selleck, and even went on to star in a TV show where he played a private detective who was kind of a cross between The Fall Guy and Magnum. His name is Talon, and, like the mighty eagle, he has a sword with three blades on it. This is awesome, especially since the master medieval iron smiths who forged this sword managed to circumvent the issue of it being way too heavy to actually carry, somehow. And not only are there three blades, but at least two of them SHOOT OUT OF THE HILT! It’s like having a crossbow, but in sword form. The only problem is that once these blades are fired and bury themselves deep within an enemy’s thorax they’re virtually irretrievable.

To be fair, when I was a teenager my right forearm could easily lift a 200-pound sword, too.

So that’s the sword part, but who’s the sorcerer? Well, that’s kind of complicated. I suppose that technically, Richard Moll is the sorcerer, even though he’s really more of a magical demon. In fact, the only magic thing we actually see him do is a Force-like telekinesis trick, pulling out hearts from across the room with his glowing fingertips kind of stuff. So he only does the one thing, while sorcerers usually do a myriad of spells and conjuring. But “The Sword and the Telekinetic Demon” isn’t quite as catchy of a title (although it’s a little cooler).

Richard Moll is awoken from his hell grave by Cromwell, who apparently is a king already but wants to become more of a king by killing Prince Talon’s dad and taking over his throne. To do this, he needs Richard Moll’s ability to Mola Ram people from a distance. Richard Moll agrees to help, because he has to since Cromwell woke him up.

The best part of waking up, is all that blood-slime all over yourself.

At this point, the movie actually narrates over an entire war fought over control of the kingdom. This happens again later in the movie, which honestly made me think that I was watching some kind of abridged version of TSATS, which would be very odd that someone would take the time to do that. But in that spirit, let me abridge the rest of the picture for you:

• For reasons that aren’t quite clear, Cromwell betrays Richard Moll by stabbing him in the gut, making him the easiest-to-kill demon in movie history.

• Cromwell kills Talon’s entire family. Although Young Talon is kind of a wuss at this point, he shoots two blades at bad guys and manages to get an arrow through his hand, making him leave the three-bladed sword behind.

• A rebellion occurs against Cromwell, led by a guy who is apparently the son of the old king’s advisor (or something), which somehow everyone agrees gives him the right to the throne? It’s like if President Obama was forced out of office, the Treasury Secretary’s son, who is a night manager at Target, steps up to claim the Oval Office, and nobody has a problem with it.

• Talon aids the rebellion, spurred on by the hot sister of the night manager at Target.

• Somewhere around here there is another abridged scene, which I refuse to belief was Albert Pyun’s intent. The production either completely ran out of money to film the gap, or they did film it, and it couldn’t be reasonably edited down into 10 minutes of screen time.

• Cromwell claims the sister as his bride. There’s a breathtaking scene of her bare tush being oiled up by female servants. Immediately following this, there’s a scene of an entire room filled with topless female servants. My parents had no problem with me watching this, and I thank them.

• Talon is captured and diagonally crucified (on an X instead of a T). Albert Pyun serves notice to oppressive Christian fundamentalists that he doesn’t need their imagery to market his picture. 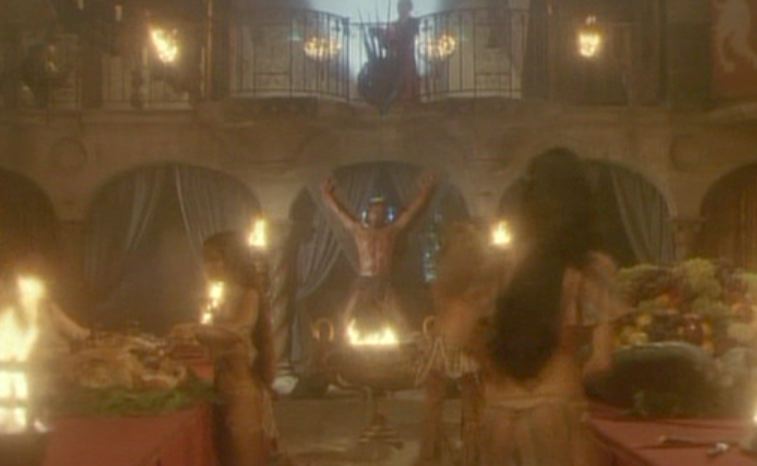 The crucifying physics of the X are a cut above those of the T.

• Cromwell’s wedding ceremony is abruptly interrupted by Talon un-nailing himself. He objects to their union by killing everyone in the room with the aid of his buddies.

• It turns out Richard Moll has been masquerading as Cromwell’s snake-faced assistant this whole time! He kidnaps the sister for no real reason and heads down to a flooded dungeon to reveal his true Moll form! He uses the Force to make Cromwell bleed from the eyes, then to make Talon bleed from virtually everywhere. But oh, all-powerful magical demon Richard Moll, you didn’t account for the three-bladed sword that has the ability to shoot one of those blades into your gut, which it does. BOOM! Done.

The same thing happened to me when I watched Ghoulies.

• Now it’s on between Talon and Cromwell. Talon could easily just shoot another blade into Cromwell’s face and end it quickly, but he’s sort of been waiting his whole life for this fight, even though he’s never tried to take revenge before this moment and had to be coerced by the sister’s vagina to even try to confront Cromwell. Seriously, he’s completely uninterested in teaching Cromwell a lesson up until this point. It goes against every revenge story that has ever been put to film. Cromwell overthrew and murdered Talon’s father, beheaded his mother as Talon watched and killed his younger siblings. In any other movie Talon would be seen honing his fighting skills for years, spurred on by rage for the murderer of his family, until he was strong enough to finally confront his enemy. But Talon? He doesn’t seem to give a crap. It’s like he doesn’t even remember what Cromwell did until it’s time to fight him. And even then, he’s more cocky about it than vengeful, like, “I’m gonna show this guy how awesome my sword skills are.”

“Revenge is a dish best served… whatever.”

• Anyway, Talon shoots blade number two into a pillar, so he can fight Cromwell single-bladed! Of course, Talon wins. At this point, in any other picture, Talon would take Cromwell’s crown and place it on his own head, claiming his rightful place as king, with his new queen (the sister) by his side, and rule the kingdom with peace and righteousness until the end of his days. But not Talon. He tosses the crown to the night manager at Target, tells the sister it’s been real, then rides off with his buddies. A voiceover indicates that he’s off to help out the other kingdoms, and that tale will be told in the sequel. But that sequel never came. Actually, it did, just a couple years ago, but it stars Kevin Sorbo and Michael Pare, so it essentially doesn’t exist.

Due to the ultra-progressive views of my parents on letting children watch whatever they want, I was able to recall most of these scenes throughout the movie. I barely even touched on some of the scenes of over-the-top violence, such as two rebels getting their tongues cut out, or a bad guy getting his head split apart by a stone grinding wheel. But I’d like to think that this movie full of nudity and violence shaped me into the man I am today: a man who likes nudity and violence in movies. Thanks, mom and dad!

Brad: I totally missed this gem growing up. Maybe Beast Master was good enough for me because I saw that flick dozens of times. How I missed The Sword and the Sorcerer is beyond me. Seeing it for the first time now I can say it was well worth my time. I’m still fuzzy on the whole Sorcerer aspect of the flick but Richard Moll’s Demon is bad-ass enough to see past the need for pointless yet catchy alliteration in the movie’s title.

This movie is seriously flawed though, but that’s only because I’m seeing this movie through a manchild’s eyes. Questions arise like:

Flaws aside, this is a cult classic and I’m glad the hype that I heard about it from all the geek movie sites was honorable to it.

7 thoughts on “The Sword and the Sorcerer”