Synopsis: Two elf (or trolls, I’m not sure) brothers go on a quest to resurrect their dead father for one day’s time.

Would you be able to sit through it?: Sure. I’m not 10% sure if I was mildly bored or just preoccupied with COVID-19 thoughts but I wasn’t that enthralled with much in this movie. It wasn’t bad at all just not that great either.

Any scary/violent parts?: Nothing too crazy or disturbing. The Manticore goes ape-shit in her tavern for some apparent reason and burns the place down. The finale has a giant dragon made of concrete, steel, and other building materials but the face (comically) is a happy, cute one. 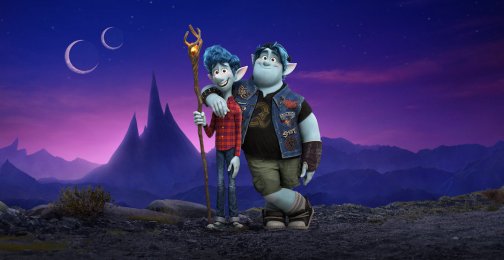 Anything that will screw up your kid’s head?: Not really. It’s kinda an odd choice that when the brother’s botched up the magic spell to bring their dad they only completed his feet to his torso. I guess they half-assed it huh? But through most of the movie, the dad communicates by playing ‘footsie’ with the boys and you can’t help but stare at the crotch/ass area since that’s the highest level of the character. Like I said, kinda odd.

Any lessons to be learned?: This Pixar movie was kinda light on the symbolizing and parableness (is that a word?) Anyway, the big gist of the story and the main character arc for the younger brother was that even though he didn’t get to know his dad and wished he could spend one day with him, he realized that since he was a little kid he did experience great things with his older brother, who was always a father-figure to him. Not exactly sure if the lesson is: Take what you can get or Be thankful for what you have. Maybe a combo of the two.

Recommended age: 5. This appeals to all ages. Actually, it’s more for younger viewers in contrast to other Pixar movies that have a lot of humor or references for older viewers.

Overall: This was one of the more MEH Pixar movies of late. It wasn’t bad like The Good Dinosaur was but it’s maybe a notch better than the Cars/Planes movies for me. It’s been a long while since I saw the first Cars so maybe it’s not as good as Cars. Point is, this was kinda mediocre and blah. My kids seemed to enjoy it but it’s definitely a one-and-done deal for them and me.

However, given the dearth of new movies, especially kids flicks, I would easily recommend you plopping down $20 to watch while you’re self-quarantining.