Synopsis: Woman flees her abusive scientist boyfriend only to then be terrorized by him while he’s in a suit that renders him invisible.

What works: Oh boy, not a whole lot. Hello everyone! Sorry I’ve been MIA for a while but considering I’m stuck inside because of the COVID-19 virus, I decided I have more time to write these silly reviews. And what better way to start off by discussing one of the films that was super-quickly released VOD because all the theaters are closed up.

But yeah, what a waste of time. This horror story was completely lacking in any decent thrills, spills or chills. The effects aren’t even that impressive because with green-screen technology being as easy as it is nowadays, rendering someone invisible ain’t such a tough feat to pull off. Hell, even I can do that at home with Final Cut Pro with no real difficulty. I’d go so far to say that Kevin Bacon’s Hollow Man did the effects and story way better than this. Never thought I’d ever say that.

Moss was decent but I never thought she was that great of an actress anyway. But she was fine. Everyone else was fine. There’s not much to comment on the acting really.

The only scene I liked and was surprised by I can’t really talk about without spoilers so I’ll keep mum. 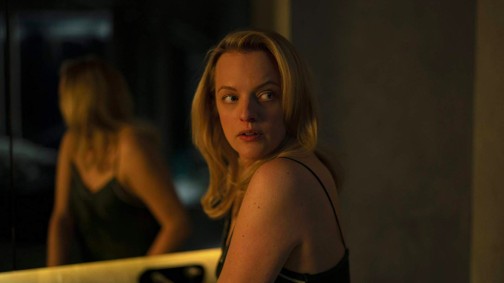 What fails:  OK so right off the bat we are presented with Moss trying to leave her boyfriend in the middle of the night and hilariously failing at it. She not only kicks the dog’s metal water dish sounding like Keith Moon bashing his cymbals but when she tries to tell the same dog to stay in the garage she bumps into the car making the annoying car alarm go off and from that point I couldn’t help but chuckle loudly. However, this scene also never addresses the plot of her boyfriend, Adrian, as either abusive or a brilliant scientist. It’s revealed later that he was abusive but we never witness anything or are told much about his abuses. We, as an audience, have to sympathize with Moss solely on a short scene of her describing her feelings to friends that she’s staying with to hide from him. I’m assuming her friend and her own sister never knew that she was in such a terrible relationship that needed her to drug Adrian and sneakily flee the house in the middle of the night without him knowing? And if that’s true then what kind of friends are they? But without flashbacks or specifics it’s kinda hard to get invested in the film. Basically, the film is telling us, look the guy is a really really bad guy and you’ll just have to take our word for it.

As she’s fleeing Adrian’s house she walks past his lab so we see that he’s a scientist of some sort but not the beaker and benson-burner type, he’s more of a Tony Stark billionaire tinkerer. His lab looks more like the Bat-cave actually. There’s no exposition about what he does or what he has accomplished as far as I can tell. It’s all INVISIBLE! No seriously, if he was working on some sort of way to make things or people invisible, it’s complete news to Moss since she learns as we do that he can become invisible. So what did she think he was working on? She lived there and doesn’t even know what the contraptions do. Maybe that’s how she was abused by being locked in the penthouse suite upstairs.

Getting back to the abusive relationship angle, look, I get that maybe Moss was so abused and scared to tell anyone, thus having her own sister and friends in the dark about it but maybe throw in more expository dialogue or history in the characters to reveal this. I was going into this movie thinking this plot was more about Moss being terrorized and tormented by her ex however, I also thought the whole abusive relationship would be a bigger part of the narrative. It’s flimsy at best. Especially when we never know how he abused her and that even when he’s invisibly stalking her he never really continues with the abuses but more or less taunts and teases her to ruin her life when all he really wants, according to his lawyer/brother Tom, is to get her back and for her to keep the baby she’s carrying.

Let me back up a tad, shortly after Moss leaves Adrian, his brother informs Moss that Adrian committed suicide and leaves her with $5 million dollars. But then Adrian stalks and taunts her while being invisible as she stays at her sister’s ex-husband’s house. It’s later revealed that she’s pregnant and that Adrian tampered with her birth control to make this happen and he wants that baby bad apparently that he faked his own death, gave her $5 million dollars and tries to win her back by stalking her while being invisible. Am I missing something here? This is the plot of the movie. Guy abuses girl. Girl has enough and leaves. Guy fakes death, give her large sum of money and uses his awesome new technology to stalk her into coming back to his house and raise his baby.

What I was hoping for and expecting going by the tone of the trailers was that this was more of a story concerning an abused woman and her struggle with coping with this abuse to the extent that it was so bad that she now thinks the boyfriend, even while “dead” is still tormenting her fragile mind and she thinks he’s there, invisible, but still lurking all while her friends and doctors think she’s crazy. The is-it-all-in-the-broken-mind-or-is-it kinda deal. The movie never really goes in that vein. Sure, at first her sister, friends and authority figures think she’s nuts and even gloss past the strange occurrences like Moss striking her friend’s daughter out of the blue (why would she do that when there was no history of her being abusive) and her sister getting an email from Moss’ account saying mean things and that she wants to cut ties with her. Moss confronts her sister the same day as the email and her sister never bats an eye at how confused Moss was at the whole situation, the sister just believes the fake email. There was one other scene of Moss going to a job interview and Adrian removed her portfolio pages much to Moss’ embarrassment! You know, real horror-type stuff. It’s basically these three scenes that go so far as Adrian messing with Moss’ life. But instead of the is he there or is this all Moss’ mind playing tricks on her which would’ve elevated this movie in greater ways, mid-way through it’s blatant that Adrian really is invisible and other people are affected by his INVISIBLE TOUCH!

There is a twist however—two actually—that even I saw a mile away that also don’t do much to enhance this mediocre horror thriller unfortunately. I will leave this spoiler-free because quite frankly I wrote enough and criticized enough. However, I will poke fun at the fact that Adrian’s invisible suit looks exactly like if Tony Stark made a Gimp outfit. Once I realized that that is what the suit looked like I lost all interest I had in this movie as a horror movie. 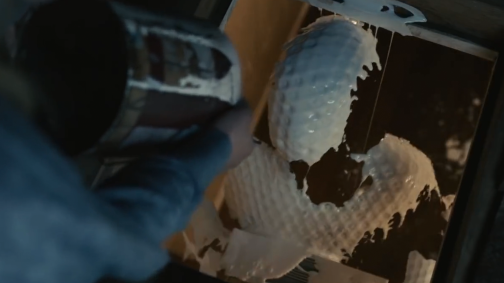 Overall: This movie was as mediocre as mediocre gets for the horror genre. It could’ve been better if they played around with the clever abused relationship plot more or that the abused mind never really heals angle as I discussed. Again, it would’ve made for a better story as well as transcended this campy horror flick to psychological thriller status and not be so forgotten. Instead it becomes a lackadaisical attempt to update such an easy sci-fi/horror villain.

However, I kinda urge you to rent it while you’re stuck staying inside to help the industry that most likely will be in dire straits when the dust of the virus settles. And who knows, you may like it anyway. I know some people that has.