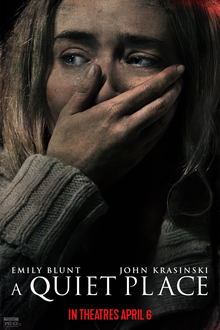 Synopsis: After the population is decimated by unknown blind monsters that have acute auditory senses, one family struggles to survive by being very very quiet.

What work(s): The concept of course. With most horror tropes being hackneyed to shit, it’s refreshing to see a decently made horror movie have a bold and unusual concept. And it’s an old time monster movie to boot. When was the last time one of those came around that didn’t have the word, Cloverfield attached to it? And I am still shocked that it was directed by hapless Jim from The Office. Krasinski did a great job for a genre picture with monsters in it.

Marco Beltrami’s score is wordt mentioning since 80% of this film is silent and spoken only in ASL with subtitles. Eerie, tense and mood-enhancing music is key and Beltrami did a fine job.

Lots could be said about the acting as well. This is not a B-movie horror flick despite it having creepy crawly spider-like aliens running around. Emily Blunt is fantastic as the mother of the group. But the stand-out is the actual deaf child actor Millicent Simmonds as their rebellious and teen-angst daughter.

I loved the ending. It wasn’t a twist ending but it felt very M. Night Shyamalan-esque. Actually, this was way better than M. Night on his best day but it reminded me of Signs in how they defeat the creature easily once they figured out their one major flaw.

What fail(s):  I would have to really be a dick and nitpick the hell out of this flick to say anything really bad about it. I did find a lot to nitpick though but it never distracted me from the enjoyment of the movie. But this wouldn’t be a Hard Ticket to Home Video post without some nitpick observations, that’s just how we roll. Some minor spoilers ahead so tread lightly (Pun intended).

Most of the nitpicks are really just centered around the story and the “problem-solving” aspect of this one family’s way of survival. On more than one occasion I kept thinking, why don’t they find a large recording studio to live in that is 100% sound-proof. They tried to make the old farmhouse/barn soundproof but of course it was flawed. The movie starts in a derelict pharmacy and we meet the family. Originally, they had 3 kids but the youngest boy still has not grown accustomed to the armaggedon that they now live in despite the title cards telling us it’s been 89 days. He’s running around the empty store and they don’t stop him. Then he wants a toy rocket ship that lights up and makes space shuttle noises. They refuse to give it to him and even take the batteries out of it but they leave the batteries and toy on a counter and leave without making sure the damn kid doesn’t take the batteries after his sister allows him to take the shuttle toy. Moments later as they are walking in the woods, he activates the toy and gets himself killed.

This scene set up how difficult it is to live in this new hell with these monsters roaming around—which is fine, it’s the beginning of the film. But, when the titles tell us it is now 470+ days since the human annihilation started, Emily Blunt is pregnant! Look, I think that having the added pressure and arduous task of being pregnant in such a crazy scenario is a good one, but c’mon, why would you willingly get pregnant with this being your predicament?! That’s probably the dumbest thing possible to do with these creatures while you struggle to figure out how to defeat them or defend yourself from them. If the movie started with her pregnant, cool. If they happened to find a lost pregnant survivor and tried to help her, also cool, but this family’s only goal is to survive and they basically sign their death warrant because Jim Halpert can’t keep his one-eyed monster away from Emily Blunt. (On second thought, I guess I can’t blame him—although how did they screw without making much noise? Anywaaaay.) 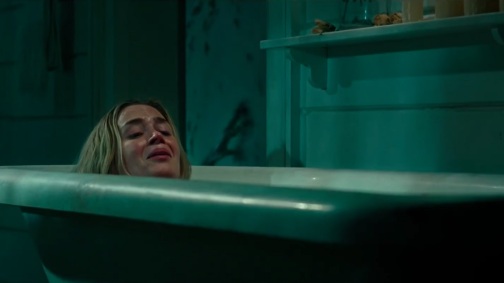 The other thing that bothered me was they seem to think that only walking around barefoot is a good solution to keeping extra quiet. They did, however, create specific paths with soft sand to follow around the farm they lived in—which is a great idea but they were walking in the town in the first scene completely barefoot. What if they stepped on a sharp rock or shard of glass? I can barely walk outside in my own backyard barefoot without hurting my foot on some small hidden branch. All the young boy had to do is step on a piece of broken glass and scream in pain and he’s a goner!

And to add to this, they live in a very old and rustic farmhouse that isn’t even carpeted! And in one scene Blunt accidentally pops up an old nail in the staircase (a nail that had no business being in the middle of the staircase and pointing up by the way!) and steps on it later on causing her to scream and attract the monsters to the house. To add to this frustration, they never get rid of the nail either. Later on, I thought for sure that one of the kids would impale their feet going down the stairs. I also think that the cellar didn’t have a door to shut for them to hide out better. Seriously, these creatures, we are told, are blind so it’s not that easy for them to navigate in a house and open doors. They had a decent hide-out in the basement of the barn but again, it’s in a basement. I would much rather be high up with these creatures roaming around then low. I know they were limited with how they can build shelters without making noise but the barn had to have a loft that they could better hide-out in, right? It wasn’t established that the monsters could leap very high. I’m sure they can’t climb a ladder either. I dunno.

I also had a slight issue with Krasinski’s death scene in how he distracted the monster away from his kids. Instead of trying to save him and them, by say, throwing an object in another direction to lure the monster from the kids he just screams and the creature attacks him. Remember, these creatures are blind and have a very strong sense of hearing, if he threw the ax he was holding just a few yards away, he maybe would still have a chance to save all of them.

The whole baby being born idea really could’ve been handled better. If I really wanted to be honest, the whole pregnant/baby idea should’ve been nixed altogether since it really didn’t add to the story much at all. Blunt somehow has the baby a mere 10 minutes after her water breaks (remarkable!) and with no drugs, nurses or even that much pain (AMAZING!). Now that I mention it, I’m not sure how Blunt cut the umbilical cord—whatever I guess! The baby, is one of the most calm newborns in the history of the world and is never the reason for attracting the monsters with its hungry, cold, or even fear-of-the-new-world crying and hollering. There’s a scene of a creature lurking around the “nursery” and blunt still manages to escape with the baby in her arms without a peep. This is probably the only annoying part in the film and an example of a fail.

Again, all these silly nitpicks do not ruin the enjoyment of the film because it is still a tense and chilling scare-filled monster movie. I was hoping for more effective jump-scares but I think I’m impervious to that sort of thing. But the movie treated the sound/music/effects perfectly without annoying or distracting the audience. I’m not saying this to be nice, I actually really liked the movie. I often say how much horror (and comedy) have sucked lately but this one is one of the better ones in recent memory.

Overall: There’s been a few “gimmick” horror films over the years, like Hush for instance that didn’t really bother to effectively exploit the gimmick enough in my opinion, but here A Quiet Place really took that silent concept and ran with it and used it perfectly. I’m not sure this is a movie to see in a movie theatre though. Sure, being in a dark theatre is great for horror movies, but this movie is extremely quiet with maybe 5 words spoken. You can hear every popcorn crunch, every slurp of soda, every crinkle of candy wrapper and old lady fart in the rows near you. If I wanted to be really courteous to the neighboring patrons, I had to keep my rustling of my popcorn very quiet and try not to annoy them with every crunch and gulp. it may be more beneficial to see this movie at home to tell the truth.

Score: 8 Why Didn’t They Carry the Shotgun With Them At All Times? (out of 10)