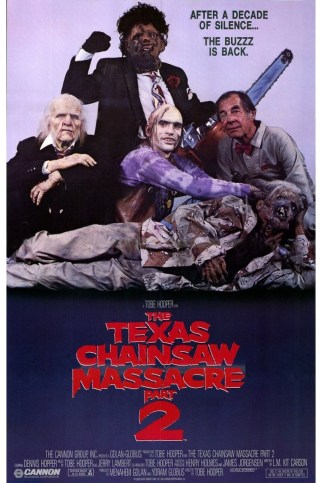 What’s It About: The Sawyer family is BACK and in hiding by murdering people on highways in Texas and winning widely covered cooking competitions.

Scare Level: There are a few jump scares from Leatherface and some creepy moments from the rest of the Sawyer clan, but they’re dulled down by the tone of the movie.

Gore Level: One of the few saving graces of this picture. Once again some excellent work from Tom Savini, the Human Gorenado.

Nudity Level: None, but it’s very suggestive when Leatherface dry humps Stretch with his chainsaw. It’s off. It’s an extension of his penis. Which he’s never used. It’s complicated. But it’s not.

Best Line: Drayton Sawyer (after Lefty gave him a chainsaw to the rectum): “Sure took care of my hems! (as in hemorrhoids)”

Best Scene: I really like Bill Mosely’s performance as Chop Top, and something happens here that works really well, and I LOVE Leatherface’s chainsaw dance.

Worst Scene: The entire beginning when these two donkeyshits drive around and screech and TIE UP THE PHONE!

Overall: Another Tobe Hooper triumph! TCM 2 is pretty lousy, BUT, it’s not the worst movie of all time as was believed for many years after its release. It’s ok. I guess with a sequel to a movie that was considered a classic and years after the fact you can either try to capitalize on what that movie did right and up the ante (which would leave you vulnerable to negative comparisons and people saying you just did more of the same) or go the complete opposite direction into basically what is an absurd farce, which is what Hooper decided to do. And the results did not turn out so hot. The original TCM is has a look and feel that was very unique and still freaks people out to this day. This movie is corny and has a look and feel like every other horror movie from the mid-’80s. Which isn’t necessarily a bad thing, but it never really goes anywhere and just rambles toward a climax, like Leatherface and his Freudian chainsaw.