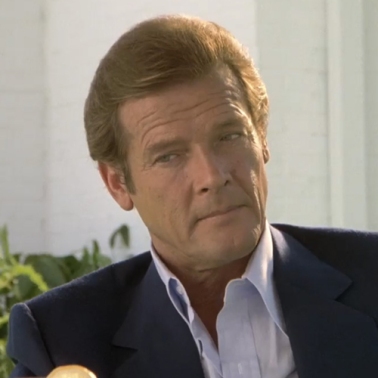 “So there you have it, a rather simple story actually. International film star, ruthless assassin, Casanova, poet, philosopher. You might say I’m a legend in my own time…in fact, you can.”

It’s with great sadness that the world lost a great man today. Seymour Goldfarb, Jr., heir to the Goldfarb Girdles fortune who lost his long-standing battle with cancer. He was 89.

Goldfarb was also an avid race car enthusiast who owned a prized silver 1963 Aston Martin DB5. He came very close to winning the fabled Cannonball Run cross-country race back in 1981 but was sabotaged by that scoundrel J.J. McClure.

While his mother wished he focused on running the lucrative girdle business that his father Seymour Goldfarb Sr. started, he relished in the fantasy that he act like famed British movie star, Roger Moore. In fact, he even referred to himself as Moore even going so far to reconstruct his face to look like the infamous actor. Taking this persona even further, Goldfarb didn’t just act like Roger Moore the actor but as Roger Moore’s identity as James Bond! Although it seemed his charade never caused much harm—his 007 Walther PPK pistol was a gag gun—it still caused a lot of strife with his mother.

But what was it about Roger Moore did Mr. Goldfarb need to emulate? Was it his debonair personality on and off the screen? Or was it the fact that Moore was arguably the best James Bond? Granted he played Bond the most of all the other actors to play 007 but he brought the character to a new sauve persona with more charm, wit and humor of say, Connery or Dalton. He definitely made the character his own and made every instance memorable. That’s a good enough reason for Seymour Goldfarb or anyone for that matter.