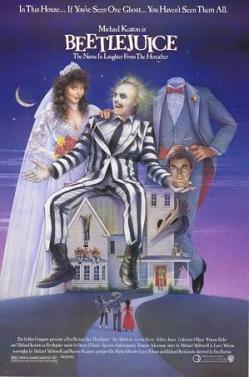 Why We Love This Scene: Probably the best introduction to a character ever. Once the Maitlands (Alec Baldwin and Geena Davis) summon the “bio-exorcist” it’s a tour-de-force performance from Michael Keaton. In a scant 3 and half minutes we are exposed to some of the most memorable, hilarious and absurd ad-libbing of all time.

This is the Tim Burton I loved and I surely miss these days. He made such eccentric, wacky and distinctive movies. Combining humor and the macabre was his specialty, which is why his Batman still works to this day. When Beetlejuice was first conceived it was planned as a horror movie. And that makes perfect sense. Strip away the humor and this is one morbid movie. But add to it the off-the-wall visuals, effects, music and characters and it becomes a bona fide unique masterpiece.

I loved the hell out of this film since seeing it in 1988 and even though I haven’t seen it in a decade or so, I was laughing my ass off watching that clip. I also could basically quote along to it, I loved it and remembered it so well. This is why I praised Keaton returning to making movies again after Birdman because he is totally a fantastic actor and performer who really never got his full due yet. Watching him in this scene in Beetlejuice again only reaffirms this. His hocking a loogie into his coat while mid-sentence is priceless. His annoyed “What?!” after he was caught peeking up Geena Davis’ dress kills me every single time. And one of the best examples of being able to watch PG-13 before I was 13 was hearing the quote: “Nice Fucking Model!” and repeating it with my friends undetected from grown-up ears.

The only new thing I noticed watching this clip after so many years is the use of cartoon sound effects, which is great. I’m glad Burton had fun making this film because it totally shows and this is one rare comedy that still holds up today. I just wish whatever spark Burton had in his early career returns to him, because the man is a creative genius. I’m seriously considering showing this to my kids next Halloween time because they will surely love it.

4 thoughts on “Shake the Scene: Beetlejuice”