Shake the Scene/Recipe: Smokey & The Bandit 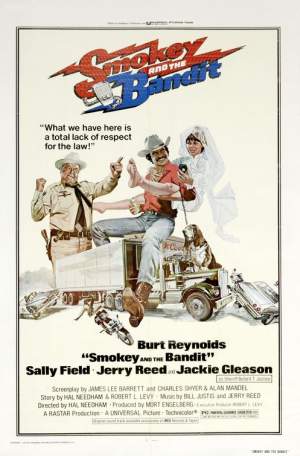 Why I Love This Sandwich: Smokey and the Bandit was a bona fide blockbuster in 1977. If it weren’t for a little movie called Star Wars, The Bandit would’ve probably been the number one movie that summer. Like Lucas’ space opera, it too, had a trilogy but that that’s a schlock story for another time, I’m afraid.

I watched it again recently and it’s a very fun movie. It’s hardly a smart comedy but it perfectly encompasses everything great about southern/midwestern Americana in the late 70s. It’s downright redneck entertainment as well as satire. It’s not afraid to praise and bash people south of the Mason-Dixon line. It’s essentially a time-capsule of what southern America was 4 decades ago and what we embraced—fast cars, BBQ, cowboy hats & boots, football, CB radios, big rigs and hard drinking’ and bare knuckle justice! If this movie was made today we would probably think it was taking place in another country altogether.

But as I watched it I was intrigued by one scene in particular, when Sheriff Buford T. Justice, played geniusly by Jackie Gleason, rushes in to a southern diner (comedically referred to as a “Choke and Puke”) while in the middle of a hot pursuit of the Bandit’s Pontiac Firebird and orders a “Diablo Sandwich and a Dr. Pepper, and make it fast I’m in a god-damned hurry!” Since the last time I saw this movie, I just laughed at his line delivery but now that I’m more interesting in food and cooking I was intrigued by the Diablo Sandwich. So I did some research to what it is.

After some googling I found that there is no real set-in-stone recipe for a Diablo Sandwich. There’s not even a proper set of ingredients. Some recipes make it with ground beef and others make it with pulled-pork. So I went back to the source—Sheriff Buford T. Justice. From what I read about Smokey & the Bandit, apparently Sheriff Justice’s lines were mostly improvised by Gleason. Whether or not his “Diablo Sandwich” line was improvised is uncertain but it’s kind of a weird thing to make up on the spot, right? Why would Gleason make up a sandwich? He most likely wouldn’t and has probably had a Diablo Sandwich before and knows it’s a southern-style or southern-based meal. The waitress in the film later on says, “Diablo & Doc” when she hands it to him (like 15 seconds later!) so it must be a real thing. I can go on and on about the chain of restaurant that is featured in the film (Old Hickory House) and trying to figure out if they had in fact a Diablo Sandwich in the late 70s but that wouldn’t much help us now. But watching Sheriff eat the sandwich gives us some clues.

A lot of recipes make this sandwich like a sloppy Joe or a Manwich. Ground beef but with hot sauce, hence the “diablo” in the name. This sounds fine but in the film, how Justice eats the sandwich doesn’t really look like he’s eating a sloppy Joe or Manwich style sandwich. What it really looks like is a pulled-pork sandwich because of the stringy nature of the food when he takes his bites. And the Bandit wipes off what looks like BBQ sauce off of the Sheriff’s shirt. I’m more inclined to think that the Diablo Sandwich is a pulled-pork sandwich with spicy BBQ sauce.

So I went again to google to find what, to me, is essentially the Diablo Sandwich recipe that Sheriff Justice eats. And again, I’m not having much luck in finding a pulled-pork Diablo recipe. So I guess I’ll have to make my own. Now you can go ahead and google a recipe if the ground beef version is more to your liking and I’m sure that particular sandwich is tasty too but I’m a purist and would rather make what Sheriff Buford T. Justice demanded!

So make up a batch of Diablo’s and don’t forget the Dr. Pepper you som’bitches!