Shake the Scene: One Crazy Summer 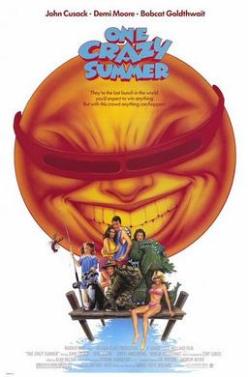 The Scene: “Once upon a time there was a lonely kind of guy…”

Why I Love This Scene: Both Brian and I have expressed our deepest admiration for Savage Steve Holland, especially for his seminal 80s teen classic comedy: Better Off Dead. But not long after he made that John Cusack masterpiece he followed it up with another great 80s classic, One Crazy Summer. To me, One Crazy Summer is probably one of the top 3 summer comedies that take place in summer and have summer themes that I happened to watch on repeat during summers. Summer. The other two are Summer School and Caddyshack. I know I chatted briefly about Summer Rental earlier this week but I didn’t see that growing up but more into my college years. Summer. Yeah those 3 are my definitive summer comedies hands-down.

But anyway, I could talk about so many great things about One Crazy Summer it would require many posts. The music is fabulous and even has an original song sung by none other than Ms. Demi Moore of all people. The cast is phenomenal—of course, Cusack is back as well as Curtis Armstrong (playing a straight character this time around), Bill Murray’s brother Joel (whom you may have seen on Mad Men from time to time), the inimitable Bobcat Goldthwait playing Godzilla in one scene with aplomb, and William Hickey and Mark Metcalf in great roles as the snobby rich land developer villain family. Like Better Off Dead it has odd and quirky characters like Joel Murray’s quiet little sister, Squid and her dog Bosco with the protective collar cone and their Uncle Frank who sits alone chain-smoking in the attic awaiting his turn to win a radio contest sweepstakes. John Matuszak also makes a great cameo as Demi Moore’s ex-boyfriend (I think). Like I mentioned there’s a scene where Bobcat is stuck in a rubber Godzilla suit while destroying a model city much to the delight of some of Japanese investors. There’s also a running gag about the filming a movie-within-a-movie: “The Dolphin With Rabies” which is obviously a Jaws spoof. There’s another running gag about Joel Murray getting buried in the sand and a large beach-goer keeps plunking his beach chair over Murray’s head and eating a lot of gassy food. I could go on and on at all the stuff that this movie has that I still remember fondly and still chuckle at. But at its heart is a great coming-of-age story about a kid becoming a man, falling love and defying the odds to prove himself. All with great quotable jokes and clever humor.

It also has gratuitous violence, albeit in cartoon form. There was one animated scene in Better Off Dead as well as the claymation hamburger scene. This is what I love and miss about Savage Steve Holland, he makes these off-the-wall comedies that borderline on spoof but also have great heart to them. Better Off Dead is about a suicidal teen with a claymation hamburger singing David Lee Roth. It’s amazing. One Crazy Summer is less black comedy than its predecessor but still worthy to be called a classic. There’s like 4 minutes worth of animation and they are episodic basically describing the themes that Hoops McCann (Cusack) is going through. In this day and age, these cartoons would never be made for a major motion picture. The first chapter basically has the lovelorn rhino take out a machine gun and mows down cute and fuzzy little bunnies who are taunting him. Sure, it’s morbid and un-PC now but damn is it still funny.

2 thoughts on “Shake the Scene: One Crazy Summer”