Hello and Welcome to our newest category: SCHLOCK WATCH! Schlocktoberfest is always a high point for Hard Ticket to Home Video so we decided that reviewing only horror flicks just isn’t enough sadomasochism and we should be covering all the genres like Sci-Fi, Action/Adventure, Post-Nuke, Kung-Fu flicks, Rape/Revenge flicks, Blaxploitation flicks, Movies about Gladiators, etc! May Crom have mercy on our souls.

Director: José Luis García Agraz (This movie is his only English-speaking credit) 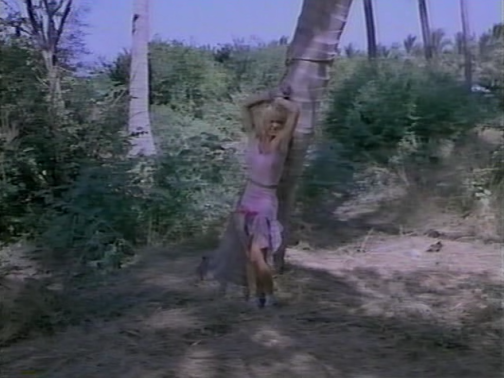 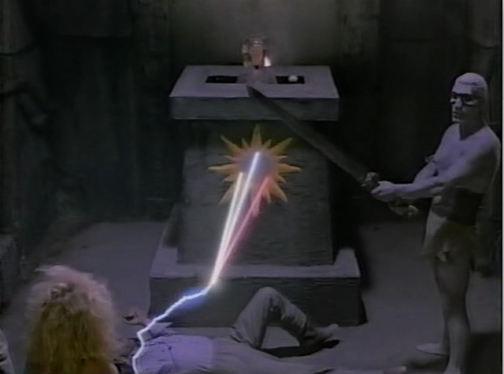 Exploitation Level (Gore, Nudity, Etc.): No gore to speak of. And the only nudity was a brief ass-crack in the beginning of the film. So if you’re looking for some of the goods that these flicks usually offer, you will be disappointed. Even Linnea Quigley was very conservative in this for some reason.

Best Scene: There is seriously nothing to be called “Best” in this incredibly lazy and utterly boring jungle adventure flick. I can probably find an actual Moon Goddess faster and easier than finding a scene I can call worthy.

Worst Scene: There are so many bad scenes its hard to keep track but the ending is just dreadfully awful. First the set design is akin to a cheap glow-in-the-dark carnival ride with plastic looking rocks, plaster-made artifacts and fog and smoke machines. The sword fight was choreographed by a blind person and the resolution with Quigley activating the contraption with the jewels is embarrassing. I haven’t seen the kids’ version of Raiders of the Lost Ark yet but I’d bet you all the money in my bank that those kids did a better job. Plus I just want to throw in my two cents on the absolute idiotic plot of Diaz being not only a part of the tribe despite not being a native but leading them. And despite being a leader with access to their loot he still arranged and hoped that the tribe would not only worship Quigley but allow her to take the treasure. My writing that made me dumber.

Best Line: “Wait where are you taking them?” “Probably bowling, Brandy…with our heads.”

Well How Schlocky Is It?: This is one of the more lamer and dullest action/adventure Indiana Jones rip-offs I’ve ever seen. I usually like Don Calfa and Linnea Quigley but they alone could not make anything worthwhile happen. Everything falls flat and everything is unlikeable. It’s truly a slogfest and not worth anyone’s time. Even Linnea’s mom probably never saw this flick and was probably told not to by Linnea herself. Looking at the poster now, I see that the poster is actually more exciting than the movie itself. The villain was terrible and had such an asinine plot. The hero, Sam Kidd, is more wooden and stiff than the lumber section at Home Depot. Was this the worst movie I’ve ever seen? not by a long-shot but it was bad and boring and a complete waste of time.

One thought on “Schlock Watch: Treasure of the Moon Goddess”